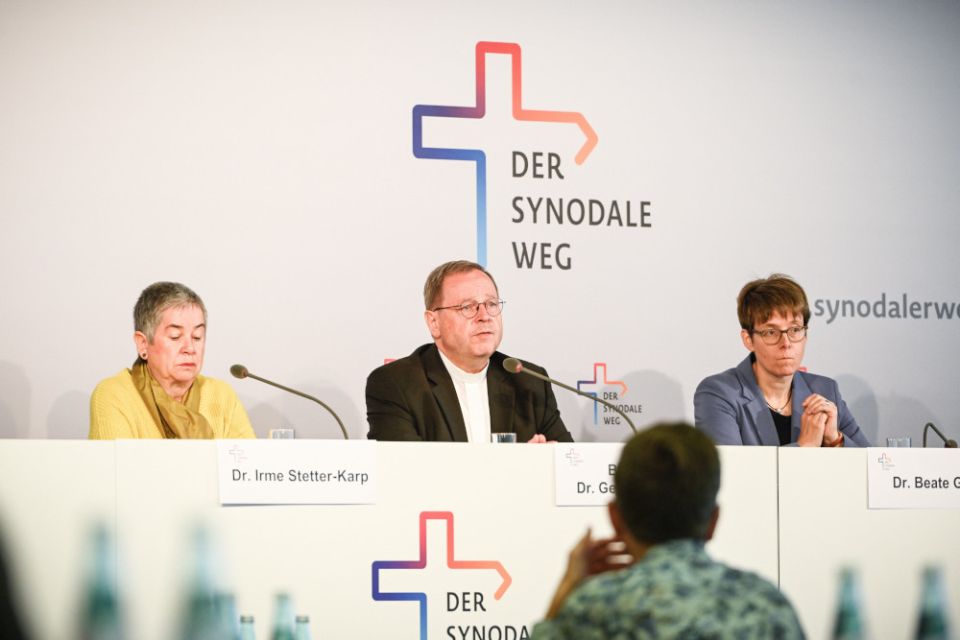 Frankfurt, Germany — The fourth plenary assembly of the Synodal Path in Frankfurt ended Sept. 10 with a series of far-reaching reform resolutions.

They concern, for example, the position of women and trans people in the church, sexual morality, gay priests and the future national leadership structure of the Catholic Church, reported the German Catholic news agency KNA. It said all texts involving changes to church doctrine were formulated as proposals for consideration by the pope and not as independent dogmatic changes by the German church.

KNA reported that several proposals could not be discussed because some debates, which got emotional, took more time than planned. Nevertheless, Irme Stetter-Karp, president of the lay Central Committee of German Catholics, said: "We have achieved a lot, and we are not going to stop here."

Participants discussed the position of intersex and transgender people in the Catholic Church. An emotional debate centered on a paper calling for more acceptance, with 94.5% voting in favor of it on first reading.

The paper calls for changes, including making it possible in the future to omit the gender in the baptismal register or to use the term "diverse" when baptizing children with an unclear gender identity, KNA reported. Transgender Catholics should be given the opportunity to have their civil status and first names easily changed in the baptismal register, the paper said.

"If believers who are transgender or intersex are denied the sacrament of marriage, they should be able to have their partnership blessed," stated the text, which a working group will now revise.

Only once did the Frankfurt assembly come to a standstill. At the very beginning, when a fundamental text on the renewal of Catholic sexual morality came up for a vote, a blocking minority of bishops prevented its adoption, KNA reported. Only 33 out of 60 bishops present voted yes -- not enough to achieve the required episcopal two-thirds majority. There was great disappointment among the majority; tears flowed and members of sexual minorities left the gathering in protest.

The conference presidium drew lessons from the upset. The speaking time was doubled to two minutes. The representatives of the conservative minority, including a number of bishops, were able to present their concerns in a more nuanced manner, and a serious debate ensued, in the course of which some opinions apparently changed, KNA reported.

In addition, a measure was introduced by Bishop Georg Bätzing, president of the bishops' conference. Before each sensitive vote, he called the bishops together for a separate 20-minute consultation behind closed doors. After this break in proceedings, the bishops returned to the plenary -- and the bishops did not block any more votes.

KNA reported that in this way, and through important speeches in the assembly, Bätzing, co-president of the Synodal Path, was able to influence the course of the assembly. He succeeded in lessening the animosity that had erupted after the upset of the first day and also shielded conservative brethren from polemical criticism.

There were several debates about whether to vote by name or anonymously. Despite protests, the plenary made voting by roll call compulsory and enforced it several times.

In the debates, speakers from the reform-oriented majority often referred to Pope Francis. Cardinal Reinhard Marx, one of the founding fathers of the Synodal Path, stressed that the pope wanted a "synodal church" and that the church in Germany was progressing along this path.

Several speakers said the reform proposals, which are far-reaching by the standards of the worldwide Catholic Church, were an important impetus for the church in other cultures and countries.

Numerous delegates referred to the large number of people leaving the church in Germany and said the exodus could only be stopped with decisive reforms. Another often-cited argument was sexual abuse by clerics. The church owed it to the victims to change its doctrine and structure in such a way that these crimes could no longer happen, said Gregor Podschun, chairman of the Federation of German Catholic Youth.

The meeting's outcome met with praise and criticism.

The pro-reform group We Are Church, which has been demanding change for decades, called the three-day meeting a "reflection of the dramatic situation within the church."

"What was frightening was the at-times simple argumentation and the obvious polarization within the German bishops' conference as well as the refusal of many bishops and auxiliary bishops to participate in the substance of the debate ahead of the Synodal Assembly as well as here in Frankfurt."

By contrast, Dorothea Schmidt of the conservative Catholic group Maria 1.0 wrote in the newspaper Die Tagespost that she had "witnessed the hostile takeover of the Catholic Church." In her mind's eye, she saw tanks drawing up "to make room for the German-nationalist-permissive-feminist-gender church." The majority "pushes through what they want to push through ... without regard for the minority and church teaching."

The Synodal Path is due to end with a fifth plenary assembly in Frankfurt in March.