In Greece, the evil eye is trending 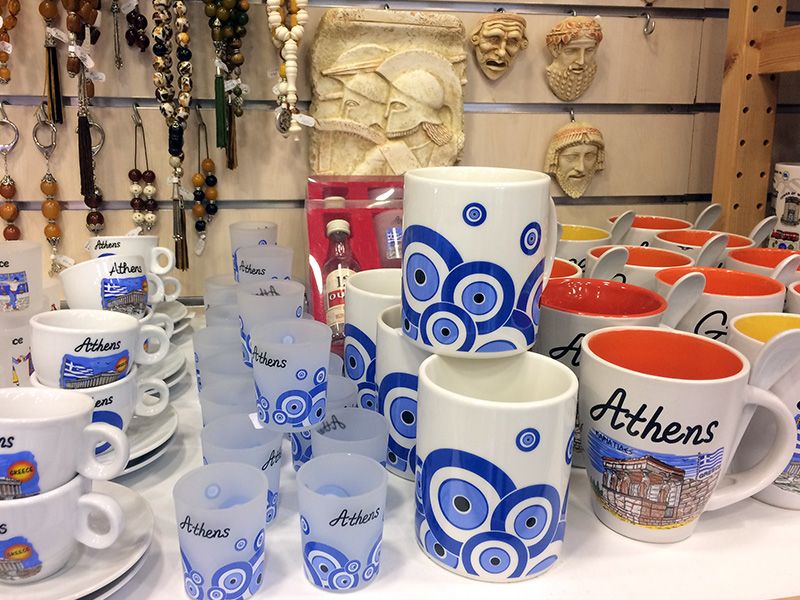 Evil-eye-themed mugs and shot glasses for sale at the Monastiraki market in Athens, Greece. (RNS/Jenny Lower)

Athens, Greece — Stroll down Ifestou Street in the bustling Monastiraki market, and you’ll spy ropes of necklaces, bracelets and keychains bedecked with the mati, or “eye,” the distinctive talisman with concentric blue and white circles.

For years, tourists to Greece have snapped up the charms, these "all-seeing eyeballs," which are supposed to help ward off the "evil eye." The term refers to negative energy caused by another’s jealousy, which Greeks believe can cause minor troubles and even physical symptoms for the victim.

These days the symbol is popping up everywhere, from handmade soap to chic hotel lobbies. A Greek-language iPhone app promises the secret prayer to remove the evil eye. Vendors in the Monastiraki market say the merchandising trend has been growing during the past several years, but now it is sweeping up tourists and native Greeks alike.

The booming popularity appears to reflect a growing interest in New Age spirituality as well as the psychological toll of Greece’s ongoing debt crisis.

Though the cerulean blue charm is still the most traditional, today you’ll find variations in pink and even multicolored bracelets for kids. The charms are most popular among Egyptians, Spaniards and American girls, sellers said.

Myrto Dafne’s family has run Duende souvenir shop on Ifestou Street since 1895. Their store has a modest display of mati keychains and medallions. Most tourists she encounters don’t know what the symbol means.

Dafne tells them: “'It’s superstitious, it’s supposed to bring luck.' So they get excited about it.”

Nearby, Nichole Mollman, a high school art teacher from Panama City, Fla., browses for mati charms with some co-workers. They’ve brought a group of students to Athens for a school trip. “I’m like a spiritual, karma, what-goes-around-comes-around” type of person, she said. “For me, the evil eye is a preventer of evil energy.”

Though she comes from a long line of Roman Catholics, Mollman will soon become the first in her family not to get married in the church. She said the surging popularity of the evil eye reflects a cultural shift toward alternative beliefs.

“The evil eye is like the new trendy cross,” she said.

Secular concerns may partly explain the eye’s resurgence now. Since 2009, the Greek financial crisis has decimated the country’s economy. More than a quarter of its citizens are now unemployed, and half of Greek youth lack jobs.

In such times, people often turn to familiar traditions, such as the evil eye, for comfort.

“It’s part of this New Age thing, but also — I think there is some value to these practices. It sort of gives you a sense that you can somehow control the reasons that create stress and anxiety,” said Nadina Christopoulou, a Greek anthropologist who runs a nonprofit organization for refugee women based in Athens.

She cited her mother, who lives alone in the countryside. Since the economic crisis, financial pressures have restricted her ability to extend charity to others. Her mother “claims she gets [the eye] five times a day,” Christopoulou said. Each time, she contacts three different people for support, as well as her daughter.

The benefit of the purging ritual may be a placebo for her mother, Christopoulou said, but it connects her with others who care about her.

Belief in the evil eye goes back millennia. References to the evil eye appear in the Bible and Sumerian texts, making the concept at least 5,000 years old.

It is based on the notion of a limited amount of good in the world, and the idea that one person's envy can deduct from another's fortune.

Still prevalent in contemporary Mediterranean cultures such as Greece, belief in the evil eye is also common throughout India, Ireland, the Middle East and Eastern Europe. As immigrants from evil eye cultures have settled around the world, they have brought faith in the mati with them, passing on the belief to their descendants.

“It’s become such a huge industry. I was in a Greek town and I wanted to get a gift. Part of their packaging is, when they wrap the gift, they also tie a mati,” said Filio Kontrafouri, a Greek-American journalist who counts the evil eye as part of her heritage. “I love it. I feel like it’s so Greek.”

For many Greeks, belief in the eye starts in childhood. Voulina Stathopoulou learned about it from female relatives. She now has a mati hanging over her son’s bed and is considered something of an expert in her circle. Friends call her every few weeks, begging her to say the special prayer that removes the eye. 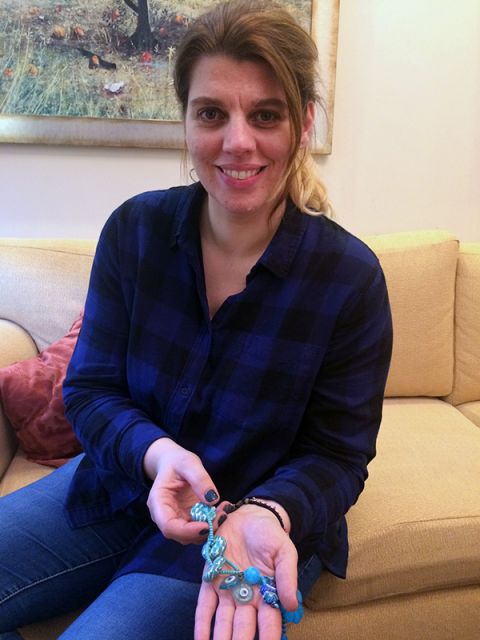 How does the evil eye supposedly work? You might see someone passing in the street and think “What a nice coat” or “Her shoes are wonderful,” Stathopoulou said. A villager might note admiringly that his neighbor’s cow has birthed two calves.

The compliment can be rooted in good intentions, or not, Stathopoulou said. "I can say it for a bad reason, because I’m jealous.” That admiration tinged with envy is what believers say produces the evil eye and results in real-world effects — causing someone to spill coffee on that nice coat, for example, or twist an ankle in her new shoes. The neighbor’s cow might drop dead.

Or the victim just gets a headache or feels sleepy, she said.

As Stathopoulou's husband passed through the room, he chuckled.

“My husband laughs because he doesn’t believe it. I have good friends who don’t believe it either,” Stathopoulou said. But “I think that most people believe it.”

Though the Greek Orthodox Church considers the mati at odds with Christianity, many within the church accept the idea of an evil energy circulating among people, which may help explain the talisman's enduring popularity in this highly religious country.

“The devil tries to hurt humans using their evil energy,” said the Rev. Demetrios Nikou, high priest of the Cathedral of Athens, a short walk from the Monastiraki market. But only the Christian cross can provide true protection, he said. “Religion-wise, the blue eye does not mean anything. This is a cultural symbol.”

As for the prayer to reverse the evil eye, it is uttered in Greek, three times, and ends with the victim’s birth name. Rules govern how and when you can learn it. A woman must learn it from a man, for example, and vice versa.

According to tradition, people with blue or green eyes can more easily give and receive the evil eye. Children and babies are particularly susceptible, which is why Greek families often gift a tiny gold or silver pin with a mati charm to hang by newborns’ cribs.

Once the prayer is complete, excessive yawning and watery eyes signal that it’s worked.

Despite its widespread acceptance, even those who say they believe in the evil eye and the powers of the mati sometimes acknowledge room for doubt.

“It may be some kind of myth,” Stathopoulou said. “Maybe it’s something you need to believe in because it makes you feel better.”

World | In Greece, the evil eye is trending

Sin is scary, but God is always ready to forgive, pope says

How can you really love God? I've found three keys