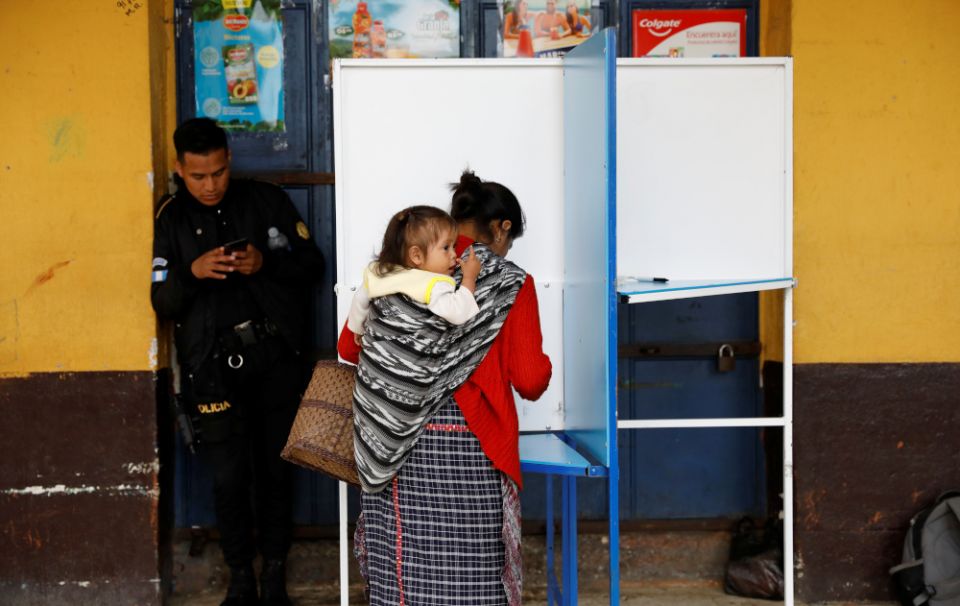 Guatemala City — Sunday Mass Aug. 11 at the Metropolitan Cathedral in Guatemala City included prayers for the two candidates running in that day's runoff election and the country's outgoing president.

A woman at the Mass said, "We pray for the next president, lawmakers and public officials so they act honestly and effectively over the next few years and they are guided by the righteousness of reason and their intentions are illuminated by the teachings of our Lord Jesus Christ."

The next president of Guatemala will be Alejandro Giammattei, a former prison system director, who captured 58% of the vote after multiple failed attempts at winning public office. He decisively beat former first lady Sandra Torres. She polled well in rural areas rife with outward migration, but was polemic for her political past, which included divorcing her husband, then-President Alvaro Colom, so she could try to succeed him in 2011.

The election came as Guatemala grapples with a proposed "safe third country" agreement, which would mean migrants wanting to apply for asylum in the United States, but having first stepped foot in Guatemala, would be returned to the impoverished Central American country to apply for asylum there.

The largest number of migrants and asylum-seekers apprehended at the U.S. southern border come from Guatemala.

The country's Catholic bishops have blasted the agreement as secretive and said the country is in no condition to receive so many migrants.

The runoff also occurred as the country backslides on anti-corruption initiatives – such as support for the International Commission against Impunity in Guatemala, which has had successes such as imprisoning a former president and putting previously untouchable elites under investigation for the first time. The commission concludes its work in September, despite polls showing public support for its continuation.

"It's been very successful. It's made the powerful classes of Guatemala tremble, those who were used to privileges and impunity," said Nery Rodenas, director of the Human Rights Office of the Archdiocese of Guatemala City. "That's why they're attacking it."

Voters responded to the runoff election with a lack enthusiasm, with turnout of 42% of the country's 8.2 million voters. Both candidates brought checkered political pasts to the contests and accusations of being backed by sections of the army and powerful economic elites.

Two candidates with strong support – Zury Rios, daughter of a former dictator from the 1980s convicted of genocide against indigenous peoples, and Thelma Aldana, a former attorney general pushing an anti-corruption agenda – were disqualified by the courts.

"Both of the candidates are somehow stained. ... You're picking the least-worst one," said Marvin Martinez, a police officer.

"This Sunday is more of the same," said Ludvin Urrutia, an administrator at a Jesuit-run Faith and Joy school in a tough Guatemala City suburb. "There's no call for structural change," he added, explaining the perceptions that "dark interests" are backing the candidates, be it sections of the military, economic elites or organized crime.

Giammattei has promised to combat crime and slow migration in Guatemala, where residents of poorer and indigenous rural regions have increasingly fled poverty, drought and violence. He also pledged to seek better terms for the proposed safe third country agreement – which is unpopular in Guatemala and details of which are still uncertain. President Donald Trump has threatened to impose sanctions and other coercive measures on Guatemala if the agreement is not implemented.

"There are no national interests in doing this," Jesuit Fr. Miquel Cortes Bofill, director of Faith and Joy school network in Guatemala, said of the agreement.

"This government doesn't have the capacity to attend to Guatemalans," he added. "Trump is taking advantage of (outgoing President) Jimmy Morales," he said.

Morales, a former TV comedian, won office in 2015 on the slogan "not corrupt and not a thief," capitalizing on the public disgust with politicians engulfed in scandals and preferring someone without political experience.

But as controversy and corruption scandals encroached on Morales' administration and his family, he moved to oust the anti-impunity commission, which had enjoyed support from the U.S. government. That backing vanished in recent years, however, as Guatemalan elites lobbied members of the U.S. Congress and Morales took decisions such as following the United States and moving the Guatemalan Embassy in Israel to Jerusalem.

"Morales' administration will be remembered for weakening the government's institutions," said Mike Allison, professor of political science and an expert on Central America at the Jesuit-run University of Scranton. "As a result, further instability is possible."

Runoff runner-up Torres won the first round of voting, but past accusations such as illegal campaign financing proved impossible to overcome.

Cortes, the school director, said Torres had previously overseen anti-poverty programs, which, he posits, had some positive results such as increased school enrollment, but also brought vices such as constructing political patronage groups.

"The title of this movie is 'absence of the state,'" Cortes said. "There's been a reduction of the state due to ideology ... and corruption."

What can we say about Donald Trump?