How the British developed a taste for religion in politics 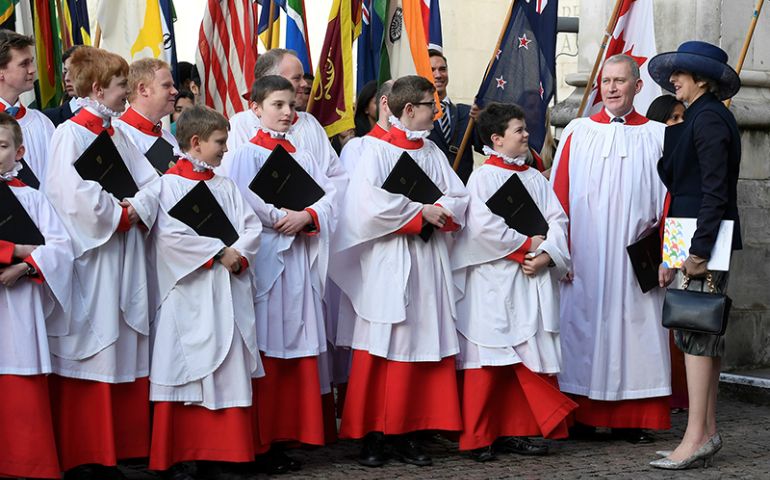 Britain's Prime Minister Theresa May, right, talks with choristers after a Commonwealth Day service at Westminster Abbey in London on March 13, 2017. (Reuters/Toby Melville)

London — The past week has been difficult for a British Christian political leader — his faith the subject of news stories and sometimes hostile questioning by journalists.

Tim Farron, the leader of the Liberal Democrats and an evangelical Christian, was questioned repeatedly about his views on homosexuality during the general election campaign, which began on April 17.

Farron, who has sometimes voted for LGBT rights and sometimes abstained, was asked whether he thought gay sex was a sin. After five days he said it was not.

The other Christian political leader, Conservative Prime Minister Theresa May, despite dominating the headlines, has not been subject to the same critical scrutiny about her religion.

And it is not because she hides her faith; from time to time May has acknowledged its profound influence on her life.

Indeed, just days before she took the nation by surprise by announcing a general election, May offered an Easter message, in which she spoke of herself as a vicar's daughter.

"This Easter I think of those values that we share … values of compassion, community, citizenship," she said. "These are values we all hold in common, and values that are visibly lived out every day by Christians, as well as by people of other faiths or none."

The notion of shared values and the unity of the nation has much to do with May's brand of Christianity.

May's beliefs are not being used to trip her up, but both the interest in her views and the hostility to Farron's are evidence of a growing fascination with politicians' faith that was unheard of 50 years ago.

May grew up in southeast England, the daughter of a Church of England vicar at a time when much of the nation was, by default, Anglican. In the 1950s and '60s the majority of people were married, baptized and had their funerals in the Church of England, the established church. It was also a time when, despite the nation's Christianity, few spoke about their faith, or about that of politicians.

That unspoken faith changed with the election of Margaret Thatcher, a cradle Methodist. Thatcher frequently discussed religion and fell out with bishops, including the archbishop of Canterbury, over the plight of the inner cities and the Falklands War.

By the time Tony Blair was elected to Downing Street, there was growing interest in the premier's religious beliefs. (Blair converted to Catholicism, after leaving office).

When a journalist asked Blair about his faith, his press adviser, Alastair Campbell, famously said: "We don't do God." But as Lord Peter Hennessy, a professor and one of Britain's leading political historians, said: "This only served to make people even more interested in Blair's faith, which was evident."

Blair's Labour successor, Gordon Brown, and May's Conservative predecessor, David Cameron, were both Christians, though not in the same league of devotion as Thatcher, Blair and May.

The reasons personal beliefs are discussed more often are complex. They include an aggressive secularism, the influx of more migrants of other faiths and fears about Islam after the attacks in London in 2005, when 52 people were killed.

Nick Spencer, research director of the religion think tank Theos, says it is also because the old class divisions between Labour, representing the working class, and the Conservatives, representing the more affluent, are no longer the dominant characteristic of British politics.

"Society is much more pluralistic today," Spencer said. "We share our space with a wide variety of people and we don't always believe what they believe. For many people now the default is not religion. So when we have a believing politician, many people don't know what having faith means, so they are fascinated by it."

Other major political leaders, such as Jeremy Corbyn, are not identified as believers.

Religion has, however, long played a part in the Labour Party, and it is frequently said that Labour owes "more to Methodism than Marx."

In recent times, Labour's biggest faith-linked issue has been a row involving anti-Semitism, which led to an internal inquiry after comments about Jews and Israel by two of its MPs and outspoken criticism of the party by the country's chief rabbi, Ephraim Mirvis.

So far, anti-Semitism has not played a major role in the British general election campaign but Islam has been placed firmly on the electoral agenda by the UK Independence Party, a right-wing party that wants to ban the burqa. So far, there is little evidence that the party's hard-line attack on Muslims is winning support.

Baroness Sayeeda Warsi, who was co-chair of the Conservative Party during Cameron's premiership, recently published "The Enemy Within: A Tale of Muslim Britain," in which she criticized her own party's government for failing to promote social cohesion. She described life for Muslims in 2017 Britain as being defined by religious identity more than racial identity. Warsi has also highlighted what she sees as an "intolerant secularism" in Britain that affects all people of faith, not just Muslims.

"I think we should recognize that Christianity is the religion of our country," he said.

Indeed, most surveys show that about half the population still describes itself as Christian.

And if polls are right and May is ahead, the next prime minister will be Christian in all the traditional ways.

According to Jenny Sinclair, founder of the emerging movement Together for the Common Good, there is clear evidence of the communitarian flavor of Catholic social teaching in May's thinking and rhetoric, which is shared by the prime minister's long-standing allies and joint chiefs of staff, Nick Timothy and Fiona Hill. Hill is herself a Catholic and Timothy has previously cited interest in Catholic social teachings in his blog.

"May doesn't flaunt this religion but she gives you a sense of it," said Hennessy. "Whereas Tim Farron is at the evangelical end; he is a preacher by temperament."

Sinclair has noticed that certain secularists are voicing disapproval of faith playing a major role in the public square. And the prime minister is responding to it.

"In saying she is Christian I don't think she is triumphalist," Sinclair said. "Within the secular narrative in Britain there is the idea that believers are odd, but from a global perspective they are not."

But there may yet be more scrutiny of May's personal beliefs. This week the left-leaning New Statesman focused on May's faith, questioning the extent to which it influenced her thinking. It cited her track record on LGBT issues — the very topic that tripped up Farron.

So far, though, May is winning public approval from a nation whose chief concern is Brexit. Before becoming home secretary and then prime minister, May was most famous for criticizing her own party, when it had been out of office for five years, as being "the nasty party" — a party that many people felt was narrow and lacking in sympathy.

May looks as if she is making the Conservatives electable. She also seems to have made it acceptable to most voters that a political leader can be a person of faith — albeit a very English form of understated belief.

World | How the British developed a taste for religion in politics