How Italy went from 'wash your hands' to 'stay at home' 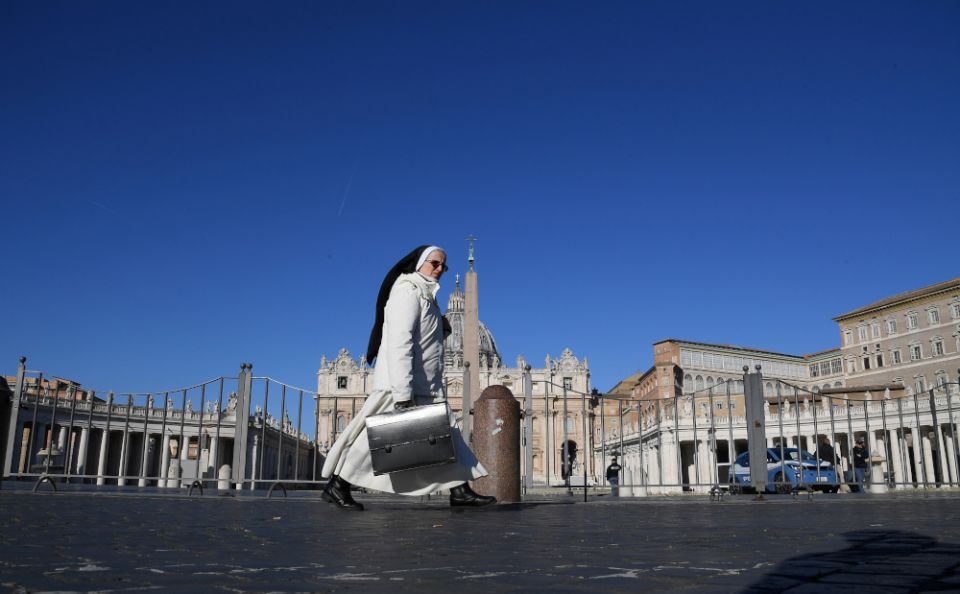 A nun walks next to an empty St. Peter's Square in Rome during the outbreak of coronavirus March 12, 2020. (CNS/Reuters/Alberto Lingria)

Rome — Acknowledging how difficult it can be to adapt to restrictive measures aimed at slowing the spread of the coronavirus, Pope Francis told people watching his morning Mass March 12 that it was for "our own good."

After two Chinese tourists in Rome tested positive for COVID-19 on Jan. 30, a public campaign began to encourage hand-washing, and Jan. 31 the Vatican installed dispensers of hand sanitizer at the offices where outside visitors receive permits to enter areas closed to tourists.

The measures have become increasingly stringent since late February when a man in northern Italy identified only as Mattia, became "Patient One," testing positive for COVID-19 on Feb. 20.

The number of people testing positive grew exponentially and all public gatherings, including Masses, were suspended in 10 northern Italian towns Feb. 22.

The Italian government put the 10 towns on lockdown Feb. 23, setting up police roadblocks to prevent people from going in or out.

As the Italian health service tested thousands of people and the virus continued spreading, the restrictive measures expanded to other areas, leading, for example to the suspension of all public Masses in much of northern Italy just before the celebration of Ash Wednesday Feb. 26.

At the same time, the Vatican began announcing the cancellation of international meetings.

All schools in Italy, from nursery schools to universities, were closed as of March 5. The pontifical universities in Rome were included in the closures.

By the time the Lenten retreat of the Roman Curia ended March 6, throughout Italy and at the Vatican, people were being advised to keep three feet away from each other.

The lockdown in northern Italy was expanded to entire regions, not just towns, March 8. In the rest of the country, Masses were celebrated that morning with people keeping their distance from each other, not shaking hands at the sign of peace and receiving Communion only in the hand.

That night, the Italian government announced the suspension throughout the country of all public gatherings, including religious ceremonies — such as Masses with the faithful present — as well as weddings and funerals. In response, the Vatican announced that Francis' morning Masses in the Domus Sanctae Marthae would be livestreamed for people who wanted to pray with him.

Just as the pace of new infections increased, so did the pace of new measures to encourage "social distancing" — limiting contact between people to avoid chances that a non-symptomatic carrier of the virus could infect others.

Francis had recited the Angelus March 8 inside the papal library instead of at his window overlooking St. Peter's Square, but hundreds of people still went to the square and watched on video screens. In the end, the pope came to the window and blessed the people.

All of Italy came under lockdown orders March 10 and, at midday, Italian police, who patrol outside St. Peter's Square, closed access to it. The Vatican kept St. Peter's Basilica open, but employees, Vatican residents and journalists were the only ones who could get inside.

The lockdown initially banned movement between cities and provinces in Italy, but shops and restaurants were allowed to stay open until 6 p.m., as long as owners enforced measures to keep customers three feet apart. People still went out for walks, some went to work, public transportation was still available.

Late March 11, after the ministry of health announced that more than 12,000 people had tested positive for COV-19 and that more than 800 people had died, Italian Prime Minister Giuseppe Conti announced a more stringent version of the lockdown, closing all businesses except grocery stores, pharmacies, newsstands and other essential services.