'I am humbled by these people' 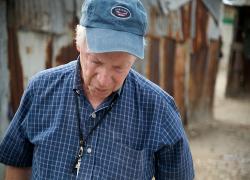 Editor’s note: Fr. Tom Hagan, 68, a member of the Oblates of St. Francis de Sales, is founder of a nonprofit organization, “Hands Together” (handstogether.org), which began its work in 1985 when Hagan, then a chaplain at colleges in southeastern Pennsylvania, started taking students on visits to Haiti. Out of those visits grew a network of supporters and a respected relief organization. Hagan moved to Port-au-Prince in 1997 where he oversaw a program he had begun in Cité Soleil, that city’s largest and most desperate slum. The program is widely recognized as one of the most effective educational and health organizations in that area.

Tom Roberts, NCR’s editor at large, contacted Hagan by e-mail and asked him about his experience during the quake and his assessment of the future of Haiti and the church in that country. His response arrived by e-mail Jan. 24. With minor editing, the e-mail follows.

Sorry my first response did not get through! My setup here is a laptop on the ground next to a very loud electric gas generator and with what seems to be a thousand young all wanting to use the computer. I will try again.

This past week has been terrifying. I have lived through all the violence in Cité Soleil over the past years: being shot at and having guns held to my head, seeing people close to me down here shot, but none can compare to the horror of the earthquake. Doug Campbell, who has been with me for over 20 years and serves as the executive director of Hands Together, had just arrived. We were to meet with the archbishop the next morning about the situation in Cité Soleil.

Doug and I were sitting down talking when the quake began. I tried to get under a table that was only a few feet away but the floor was moving in the opposite direction. I felt totally disoriented and fortunately one of the young Haitians ran back into the house and grabbed me and Doug. There was almost total darkness and I could hear screaming but also singing, which seemed weird to me, but I was told that the people were praying.

I looked up at the rubble that was our house for volunteers, seminarians and street kids. I was bleeding from the head and there was a terrific pain in my back. Doug ran back into the rubble to try and begin to pull people out, but then we heard cries that the gas was leaking and that there would be an explosion. One of the street kids, Makenson, who was shot and is now blind and whom I found two years ago literally in the street, was crying out to me beneath all the rocks and debris but we could not get to him. [Makenson was eventually rescued.]

It was then that two ex-gang members from Cité Soleil ran up to me and carried me to Mother Teresa’s nuns. When I entered their compound they were already treating the wounded and they bandaged me up and I hobbled back to my place.

Throughout the night we held vigil, and slowly we were able to get everyone out except two of the 21 seminarians who were living with me in the house. I remember vividly that night seeing people who were burned badly by the electric wires that had fallen everywhere. The next night we were all huddled outside when we would experience a very large aftershock.

It was very frightening. On the same night at about midnight we began to hear screaming and people were screaming that there was a tidal wave coming. We all started running, and for the next hour I, along with thousands of people, were moving to higher ground. We did not know what to believe.

I am ashamed to say that I am still frightened, but now I am also experiencing a feeling of being overwhelmed. When I go through Cité Soleil now I see the eight schools that we built (schools that were totally free and the only free schools like that in the country with more than 9,000 kids). I walk past what was once our clinic that took care of 20,000 -- again the only totally free clinic in the area. I see what once were the houses that we built for 150 people and the elderly projects for over 800. I look at the large kitchen area where people prepared hot meals each day for over 10,000 -- and all of it is gone.

There is also the problem of the destroyed prison, from which over 4,500 men were freed. They all escaped, and there is a side of me that is happy that they did. Many of them should never have been there. I would visit the prison every week and there were as many as 600 in one holding cell and many of them had never even been in front of a judge.

Unfortunately, some are psychopaths, and all of them are now back in Cité Soleil.

I just came from offering four Masses. Each time I would finish, another crowd would come up and ask for Mass. This is a real comfort to me and more than ever I realize that I, we, can’t survive if we do not simply put everything into God’s hands. I’ve got to work hard to practice this.

Tom, you ask about the church. Well, the people here lost a very holy man [Archbishop Joseph Serge Miot] and a very good bishop, especially one who was supportive of me in Cité Soleil. He was a good friend, and I will miss him greatly. But the church will survive.

It is during a time like this that I find myself very proud of my church. Everywhere you go, you will see the church reaching out now and helping the people. The Missionaries of Charity (Mother Teresa’s nuns) are just amazing. The people here have a great faith. When I go to Cité Soleil now, as I do every day, I see few tears. The people have an amazing resiliency. Maybe it is because they have few material possessions and apparently their happiness does not depend upon possessions. The sight of a sunset means more to them that their possessions. What makes me most proud of my church is that the message we give the people is that they have enormous worth in the eyes of God and that they are infinitely loved and that this terrible disaster is in no way a punishment from God.

I recently said this in a sermon and the people all stood up and began clapping and cheering. I had to ask the altar server why they were clapping (I thought that I had said some thing wrong because my Creole is not good) and he said, “Father, no one ever tells them that they have worth.”

The Catholic church will survive, and I am sure of it.

But the longer I am here, the less I know. I really could not speak with much authority about what will happen with the government or even what would be the best way to help the people. I also struggle a great deal even being here. I feel strongly that we can do a great deal of harm with the best intentions when we begin to be the benefactor.

Even with all this aid coming in, we must go slowly, and every step of the way we must include the Haitians in the decision-making.

During these very difficult days, I find myself really loving these people. These are the same people who endured the slave ships, a horrible system of slavery, and who would be the ones who would eventually defeat Napoleon. They would continue to suffer greatly but they have a strength that is remarkable. I am humbled by them and privileged to be with them.

Pray for me. Take care!

World | 'I am humbled by these people'