In Kenya, Francis calls for healing of divisions through tolerance, reconciliation 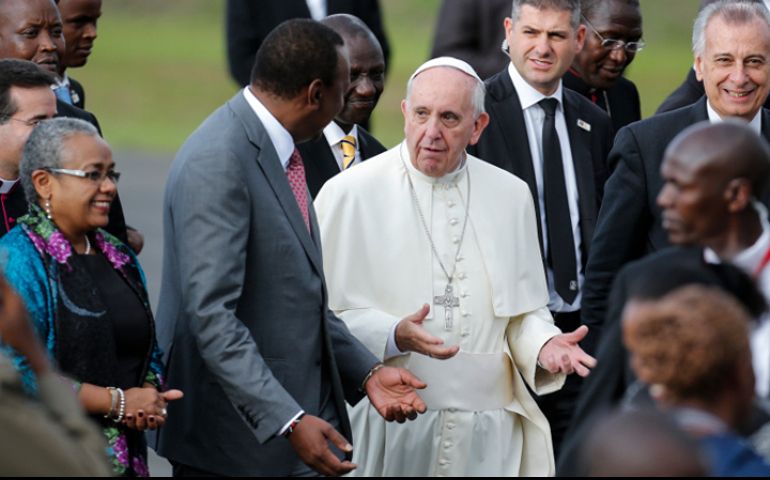 NAIROBI, Kenya — Pope Francis began a six-day, three-nation trip to Africa -- already marked in anticipation by significant security concerns -- with a call to leaders on the continent to heal ethnic and religious divisions through tolerance for differences and focus on the common good.

Landing in the Kenyan capital after a nearly seven-hour flight from Rome Wednesday, Francis told president Uhuru Kenyatta that his country should share its experience "shaping democracy" with others in the region to form a multiethnic society built "on the solid foundations of mutual respect, dialogue and cooperation."

"To the extent that our societies experience divisions, whether ethnic, religious or economic, all men and women of good will are called to work for reconciliation and peace, forgiveness and healing," said the pontiff, speaking during a formal ceremony at the presidential State House.

"In the work of building a sound democratic order, strengthening cohesion and integration, tolerance and respect for others, the pursuit of the common good must be a primary goal," the pope said.

Francis was speaking in his first remarks in a Nov. 25-30 trip to Kenya, Uganda, and the Central African Republic. The pontiff's security has been a primary concern before the visits, especially in the voyage to the last country, where there have been violent clashes between largely Muslim and Christian armed factions.

While greeting journalists on the papal plane to Nairobi, the pope told several reporters that he had a special reason for wanting to visit the Central African Republic that he would speak about on the return trip to Rome Nov. 30.

He also joked with reporters about wearing insect repellant to ward off mosquitoes in Africa. He said the insects were the only security concerns he had about the voyage and that the journalists should protect themselves, motioning as if rubbing repellant on his arms.

The pontiff also confirmed details of his next papal trip, telling some reporters he is planning to travel to four Mexican cities in February, including the U.S. border city of Ciudad Juarez, from where he said he plans to end his trip to that country.

Arriving at Nairobi's airport, Francis was greeted by Kenyatta on the tarmac and signed a formal guestbook while people ululated festively. The pope then immediately traveled via car to the State House, where the Kenyan military offered a cannon salute in his honor.

Roads between the airport and State House were lined with crowds, with people waving flags and running over dirt roads to try and glimpse the pope. Traffic towards the airport was also at a standstill for miles because of the pope's motorcade route.

At the State House, the pope met with the country's political leaders before he and Kenyatta gave separate remarks.

Speaking just days before the opening of the globally anticipated meeting of world leaders in Paris for the U.N. Climate Conference, the pontiff strongly called on the Kenyan government to protect the environment and natural resources.

"The grave environmental crisis facing our world demands an ever greater sensitivity to the relationship between human beings and nature," said Francis. "We have a responsibility to pass on the beauty of nature in its integrity to future generations, and an obligation to exercise a just stewardship of the gifts we have received."

"These values are deeply rooted in the African soul," he continued. "In a world which continues to exploit rather than protect our common home, they must inspire the efforts of national leaders to promote responsible models of economic development."

"In effect, there is a clear link between the protection of nature and the building of a just and equitable social order," he said, referencing his recent encyclical letter Laudato Si'. "There can be no renewal of our relationship with nature, without a renewal of humanity itself."

Kenyatta in his remarks asked Francis several times to pray for himself and Kenya, so that the country can fight persistent problems with corruption and ethnic and religious differences.

"Recent events around the world have indeed taught us that we must do even more to bring unity and understanding between faiths, between ethnicities, between races, and also between nations," said the Kenyan president.

"Right now, the priority must be dialogue between faiths and indeed between all of us," he said, asking that the pope pray so "that God will hear us and indeed heal this land."

Francis also called on Kenyatta and Kenya's leaders to "work with integrity and transparency for the common good, and to foster a spirit of solidarity at every level of society."

"I ask you in particular to show genuine concern for the needs of the poor, the aspirations of the young, and a just distribution of the natural and human resources with which the Creator has blessed your country," said the pope.

The pontiff was to be taken from the State House via car Wednesday evening to Nairobi's apsotolic nunciature, where he is staying in Kenya. He has no other public events on his schedule for the day.

On Thursday, Francis will host an ecumenical and interreligious meeting, celebrate an open-air Mass at the University of Nairobi, meet with Catholic clergy and religious, and deliver what is expected to be a major address to the U.N. offices in the city.

The pontiff will leave for Uganda Friday after a meeting with young people and a brief visit to Nairobi's Kangemi slum, home to an estimated 100,000 people. After spending two nights in Uganda, he is scheduled to travel to the Central African Republic for a one-night stay on Nov. 29-30.

A transition government is currently leading the Central African Republic. A largely Muslim anti-government rebel group known as Seleka took over many local villages in 2012 and seized the capital of Bangui in 2013.

That destruction led to the formation of a largely Christian militia to fight Seleka, known as the anti-Balaka. The two groups signed a ceasefire in July 2014, but skirmishes continue. The transition government is supposed to hold elections by December.

Security in that nation is being provided by a 10,000-strong United Nations force.

Francis met with journalists on the plane Wednesday for more than 20 minutes, greeting each one-by-one. He kindly put in earphones twice: Once to watch a video on a tablet computer of an aging Italian journalist greeting him and again to watch a cellular phone video of a journalist's children offering a message.

Introducing the pope before the encounter, Vatican spokesman Jesuit Fr. Federico Lombardi said the pope had met that morning before leaving for Africa with a group of 11 women and children who had survived domestic abuse, war, and human trafficking.

That meeting, held at the Casa Santa Marta where the pope lives, was an opportunity for him to "manifest his closeness to all those who suffer," Lombardi said.

World | In Kenya, Francis calls for healing of divisions through tolerance, reconciliation