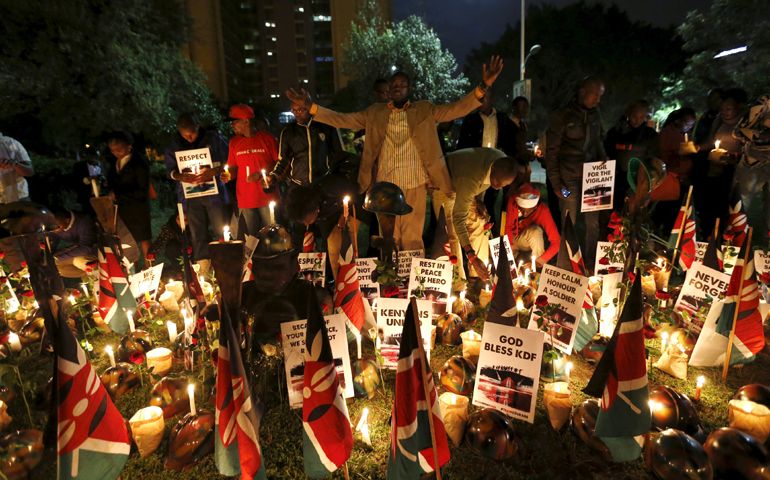 A man prays with others during a candlelight vigil in Nairobi, Kenya, Jan. 21 for soldiers killed while serving in the African Union Mission in Somalia. (CNS/Thomas Mukoya, Reuters)

NAIROBI, Kenya — Kenya's bishops offered condolences to military families "who lost their loved ones" during an al-Shabab attack on Kenyan soldiers stationed in Somalia.

As the Kenyan government continued to say it could not ascertain the number of soldiers killed, the bishops also prayed "for those who have not been reunited with their families."

Dozens of Kenyan soldiers, part of African Union forces, were killed during the attack at El Adde, a camp inside Somalia, Jan. 15. In what has been described as the worst disaster to hit Kenyan soldiers since their entry into Somalia in 2011, scores of other soldiers are still unaccounted for.

The attack has been described as being twice in devastation as the 1998 attack on the U.S. Embassy in Nairobi, where more than 200 people were killed and the building destroyed.

Dozens of Kenyan families are still pleading with the government for information on the El Adde attack. The situation has been complicated by reports that some Kenyan soldiers fled during the dawn attack, and some bodies were badly mutilated by the car bombs, requiring DNA tests.

Catholic parishes across Kenya have set up trauma desks to counsel families of the soldiers who have been killed or are missing. Other churches and pastors across the country, too, have taken up the challenge and are working with the various families in their areas.

In a letter dated Jan. 20, the bishops saluted the soldiers and described them as generous Kenyans "whose selfless service to our country has seen them pay the ultimate price in the line of duty."

"Let the blood that our soldiers shed in Somalia bind us together as a nation, with love, unity and solidarity," the bishops said.

They also offered prayers for the people of Somalia challenged by a protracted conflict and expressed support for the presence of Kenya forces in their neighboring country.

"The only way to guarantee our nation's security is help restore peace in our neighbor's house," the bishops said, adding, "We call upon the international community to work with Kenya to help make this possible."

Al-Shabab, a clan-based insurgent and terrorist group, continues to disrupt central and southern Somalia, including areas that border Kenya. Since 2011, Kenya has seen an increase in terrorist attacks, many of which it attributes to al-Shabab. Among those was a 2013 attack on Nairobi's Westgate Mall that left at least 67 people dead and more than 170 injured.