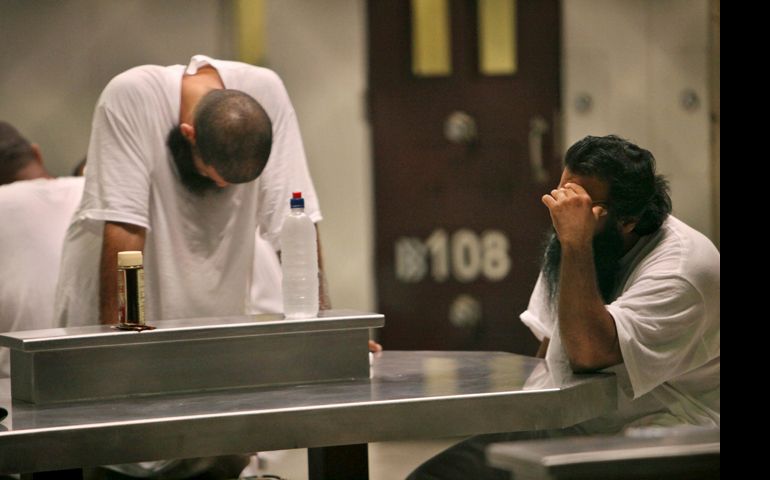 Detainees are seen inside the Camp 6 detention facility in 2009 at Guantanamo Bay U.S. Naval Base in Cuba. (CNS/Linsley, Reuters)

Accra, Ghana — Catholic lay organizations backed the stance of the country's bishops in calling on government officials to return two detainees released from the U.S.-run prison in Guantanamo Bay, Cuba, to American authorities.

The Knights and Ladies of Marshall and the Kumasi Province of the Association of Catholic Teachers called on the government to reconsider its decision of accommodating the two former detainees.

The statements came days after the Ghana Catholic Bishops' Conference urged the government to "act in the best interest of the nation by sending these men back to wherever they came from."

The groups cited concerns about risks to peace and security over the transfer of Mahmud Umar Muhammad Bin Atef and Khalid Muhammad Salih Al-Dhuby to Ghana. Their release came six years after being approved by U.S. officials, who said that "a number of factors, including security issues" had been examined.

The controversial military prison at Guantanamo Bay has perplexed President Barack Obama and his administration since 2009. Obama has repeatedly pledged to close the facility, but efforts to move detainees to U.S. prisons has met stiff resistance from members of Congress and finding countries willing take the men cleared for release has involved months of negotiations.

Legal and civil rights groups reported in mid-January that 93 men remain held in the prison with 35 of them cleared for release.

The Marshallan statement issued Jan. 18 called on the government to rescind its decision to accept the detainees and that members of parliament should have been consulted prior to taking action.

In its statement Jan. 17, the teachers group said they stood "solidly behind" the bishops. "We will continue to pray for them to keep on with their good works for Mother Ghana," the teachers said.

Release of Guantanamo detainees appears to be on upswing