A new generation in Northern Ireland for peace 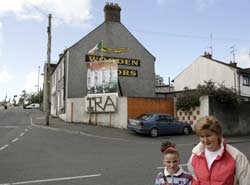 A woman and girl walk past an Irish Republican Army memorial in the village of Crossmaglen in Northern Ireland. (CNS)

Two twentysomethings from Northern Ireland, Paul Lilly, a Catholic, and Kelly McKee, a Protestant, have little in common when it comes to government rule in their province, but completely agree that violence is not the answer.

Referring to the killing of two British soldiers and a police officer within a 48-hour time period in early March by republican dissidents, McKee remarked, "The recent killings have certainly created a tension in the province, which I had hoped not to feel again."

Friday, April 10 marks the 11th year of peace in the province in response to the Good Friday Agreement, where the provisional IRA disarmed their campaign. The recent killings were carried out by a small group of republican dissidents naming themselves the Real IRA and the Continuity IRA. The dissidents admitted to the recent killings and indicated they have no intentions of stopping the attacks.

McKee, 25, remembers fear from the "dark days," being evacuated from her house while the British army detonated a bomb on her street, seeing the aftermath of a young man shot in both kneecaps in the city and regularly checking the store she had a part time job in for suspicious packages.

Lilly, 22, a Catholic, also remembers fear, and the time his own town was bombed in 1998 by the Real IRA, a bomb which killed 31 civilians in a nationalist town.

Times have changed drastically since the signing of the 1998 Good Friday agreement, brokered by the U.S., which denounced violence.

Lilly and McKee both speak of gestures of peace that occurred among many young Catholics and Protestants after the recent acts of violence.

"Our Student's Union passed a motion calling for everyone to work towards peace. This is the view of the vast majority of students," Lilly said.

McKee has noticed a movement generating against these killings through applications such as Facebook, the social networking Web site.

Lilly and McKee have grown up in a generation affected both by the historic violence and the Good Friday Agreement. They've lived separated by their religion and political affiliation as children, but have grown to realize those difference mean very little in the bigger scheme of things.

"When one gets to university, it is often the first real chance of making friends from the other side. Its not that it is that sectarian or divided, it is just the way it is," Lilly said.

In the past Protestant and Catholics attended separate schooling systems, played different sports and generally mixed in different social circles.

"Through integration in schools becoming more and more the norm, young people today are learning to accept these differences and live together," McKee said. "Often it is a generation thing. As even though my grandmother loves my boyfriend she will often make comments on the fact that I am dating outside of my religion."

A vast majority of citizens want to keep the peace no matter their background, according to McKee and Lilly. Even former leaders of the IRA and Ulster Defense Association, a Protestant paramilitary group, which in the dark days would choose to retaliate, have instead joined together for peace.

Lilly explains that Northern Ireland has a power sharing government with both Sinn Fein, a Catholic and nationalist group, and the DUP, the Protestant and unionist group, at the table. They also have a North-South ministerial council, which gives the South of Ireland a say in the North.

"This form of government is the best as it prevents discrimination, and forces both sides to work together," Lilly said.

The country is still divided in the sense that Catholic nationalists would like to see Northern Ireland united with Ireland's other three provinces, like Lilly, and Protestant Unionists like McKee, who considers herself a British citizen, and feels that Northern Ireland should remain a part of Great Britain.

It is important to note that neither Lilly nor McKee want to jeopardize the status quo of peace in their province in order for one side to prosper over the other.

"I would be for a change so long as it was peaceful and had popular support," Lilly said.

McKee believes the resolution lies within Northern Ireland by creating a strong foundation and identity for the province.

"I feel working towards establishing Northern Ireland as a peaceful and economically sustainable province in its own right is the only resolution. I want to be proud to be Northern Irish," McKee said.

Both Mckee and Lilly were once college exchange students in Radnor, Pa. –McKee in 05'-06' and Lilly in 07'-08'. Cabrini College was randomly chosen for them though a scholarship program run through Queens University Belfast.

During their time on the Cabrini campus, they said they learned to appreciate the importance of their heritage and how the United States and Northern Ireland interact.

"The U.S. has done a lot to help the Northern problem, just as we did a lot in the forming of the American nation all those years ago," Lilly said.

McKee found it difficult to explain the situation in Northern Ireland while in the U.S., because many people did not understand the history of her province. She did find students had an interest in her county, which made her proud.

McKee is proud of the province's response to the recent killings. "Thousands of people are joining together in condemnation and that makes me proud of how far we have come as a country," McKee said. "I hope that as so many people are uniting against these killings, retaliation will not occur. I hope that these people will be caught and reprimanded. I hope, but I fear."

[Christine Graf is a senior English and communication major at Cabrini College in Radnor, Pa.].

World | A new generation in Northern Ireland for peace