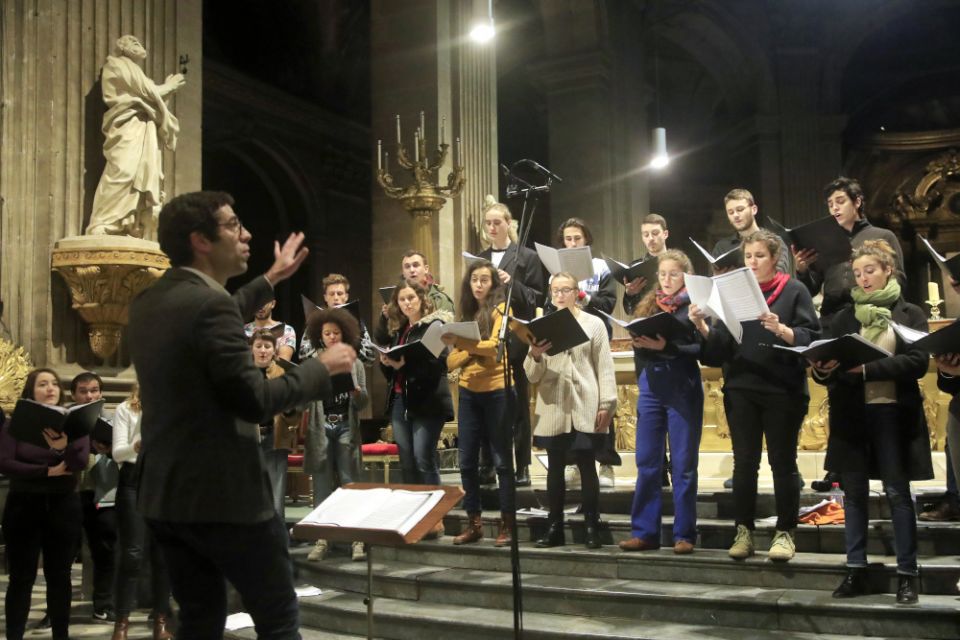 Paris — Notre Dame kept Christmas going even during two world wars — a beacon of hope amid the bloodshed.

Yet an accidental fire in peacetime finally stopped the Paris cathedral from celebrating Midnight Mass this year, for the first time in over two centuries.

As the lights stay dim in the once-invincible 855-year-old landmark, officials are trying hard to focus on the immediate task of keeping burned out Notre Dame 's spirit alive in exile through service, song and prayer.

It has decamped its rector, famed statue, liturgy and Christmas celebrations to a new temporary home pending the restoration works, just under a mile away, at another Gothic church in Paris called Saint-Germain l'Auxerrois.

And there it will remain, as works slowly progress to rebuild the cathedral after the April 15 fire destroyed its lead roof and spire and was moments away from engulfing its two stone towers.

"This is the first time since the French Revolution that there will be no midnight Mass (at Notre Dame)," cathedral rector Patrick Chauvet told The Associated Press.

There was even a Christmas service amid the carnage of World War I, Chauvet noted, "because the canons were there and the canons had to celebrate somewhere," referring to the cathedral's clergy. During World War II, when Paris was under Nazi occupation, "there was no problem." He said that to his knowledge, it was only closed for Christmas in the period after 1789, when the anti-Catholic French revolutionaries turned the monument into "a temple of reason." 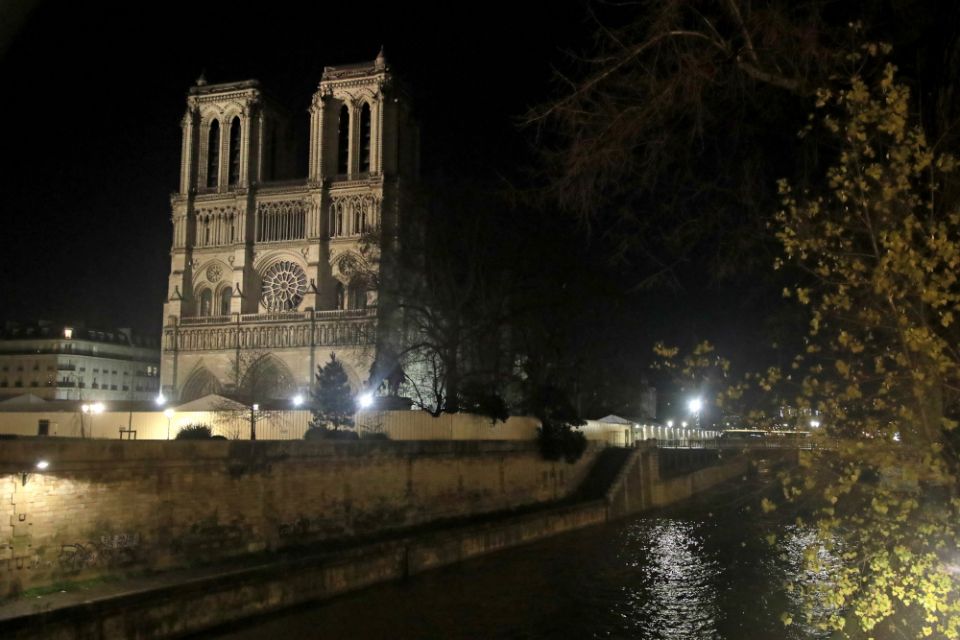 Christmas-in-exile at Saint-Germain l'Auxerrois this year will be a history-making moment.

"We have the opportunity to celebrate the Mass outside the walls, so to speak ... but with some indicators that Notre Dame is connected to us," Chauvet said.

Those indicators include a wooden liturgical platform that has been constructed in the Saint-Germain church to resemble Notre Dame's own. A service will be led at midnight on Dec. 24 by Chauvet to a crowd of faithful, including many who would normally worship in the cathedral, accompanied by song from some of Notre Dame's now-itinerant choir.

The cathedral's iconic Gothic sculpture "The Virgin of Paris," from which some say Notre Dame owes its name, is also on display in the new annex.

The 14th-century masterpiece, which measures around two meters (six feet) and depicts Mary and baby Jesus, has come to embody the officials' message of hope following the fire.

"It's a miraculous virgin. Why? Because at the time of the fire, the vault of the cathedral completely crashed. There were stones everywhere, but she was spared. She could have naturally received the vault on her head and have been completely crushed," Chauvet said.

He recalled the moment on the night of the fire when he discovered it was saved, as he was holding hands with French President Emmanuel Macron on the cathedral's forecourt. Around midnight as the flames subsided, they were finally let inside to look. Chauvet pointed and exclaimed to Macron: "Look at the Virgin, she is there!"

He said later that Notre Dame's workmen on the ground implored him to not remove the statue from the cathedral, saying that during the restoration "we need it. She protects us."

Chauvet said having it nearby for Christmas is comforting.

"She lived very much in Notre Dame. She watched the pilgrims, all the 35,000 visitors a day ... It keeps us going," Chauvet said.

Another reason for hope: Since November, after months in the dark, the facade of the cathedral is being lit up after dusk for the first time since the fire. Tourists over the festive period can now see the famed gargoyles and stone statues at night in their full illuminated splendor from the adjacent bridges, although the forecourt is still closed.

Cathedral officials carefully chose Saint-Germain l'Auxerrois as the new temporary home because of its proximity to Notre Dame, just next to the Louvre, allowing ease of movement for clerics who lived near the cathedral. Also, because of its prestigious history. 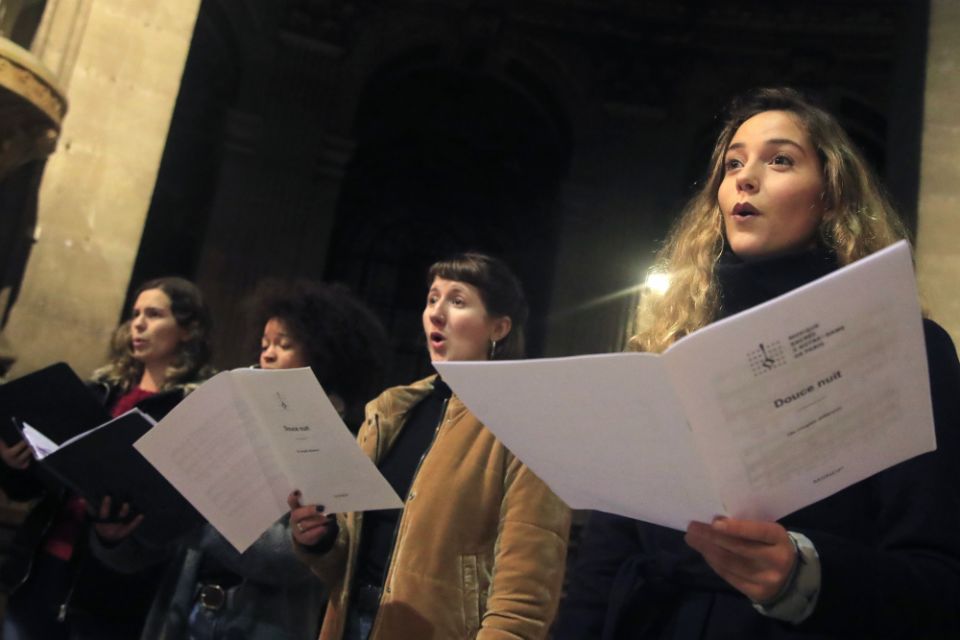 In this photo taken Dec. 16, members of the Notre Dame cathedral choir sing during a rehearsal at the Saint Sulpice church in Paris. (AP/Michel Euler)

It was once a royal church that boasted among its faithful French kings, in the days when they lived in the nearby Louvre Palace. The kings, Chauvet explained, would simply cross the esplanade to come and attend Mass.

Since September, the church has been welcoming the cathedral's flock each Sunday.

Though Notre Dame has moved liturgically to a new home, Notre Dame will always remain Paris' cathedral so long as the bishop's physical chair, or "cathedra" doesn't move.

Derived from the Greek word for "seat," a cathedral's entire identity technically boils down to the presence of a chair.

It is not only the faithful who have been displaced since April's blaze.

Notre Dame was home to a vibrant 160-strong choir-school, which provided singers for each of the cathedral's some 1,000 annual services. Midnight Mass at Christmas was always a special event in the year: One of the rare times the entire choir sung together and used the cathedral's famed acoustics to their fullest.

Instead of disbanding, this now-homeless chorus of singers, ranging in age from 6 to 30, has too honed an upbeat message and decided to continue on in a divided form. Different sections of the choir put on concerts in churches, such as Saint-Eustache and Saint-Sulpice, in Paris and beyond. On Christmas Eve, its members will sing at various yuletide events, including at Saint-Germain l'Auxerrois, as well as, bizarrely, at the Russian Circus.

But don't mention the term choir-in-exile to one of the choir's directors, Henri Chalet.

"I'd rather use 'beyond the walls.' ... 'Exile' brings it back to sadness. Obviously, there is a lot of sadness and desolation for us to no longer be in our second home. But there is also a lot of hope because it is only a phase," Chalet said. 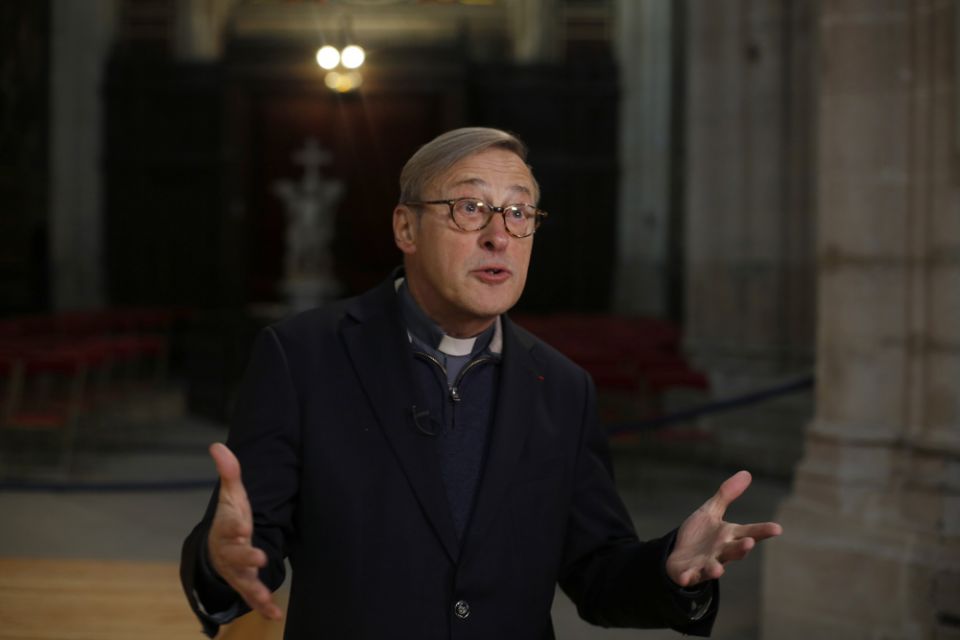 In the grand scheme of things, five or six years of restoration for an 855-year-old cathedral "is nothing at all," Chalet reasoned. Macron declared in the days after the blaze it would take a mere five years to restore the cathedral — a timeline many experts deem unrealistic.

"To think that I was ill last Christmas ... thinking that I would go again this year with no problem!" she said.

On the first rehearsal she attended after the blaze, she said she "felt such a pain and such sadness" because the cathedral was where she began as a singer.

For the singers, the unique acoustics produced by the cathedral's massive dimensions are sorely missed.

"When we balanced it right, it was the most beautiful feeling of just hearing it resonate through this enormous space," Ortscheidt said.

Despite having "to walk around a lot now," people have got used to the choir's new lifestyle, she said, and it was just a matter of time before there will be song in the cathedral once again.

In the meantime, "the important thing for us is that we keep on singing and doing the music. That's what brings us together."