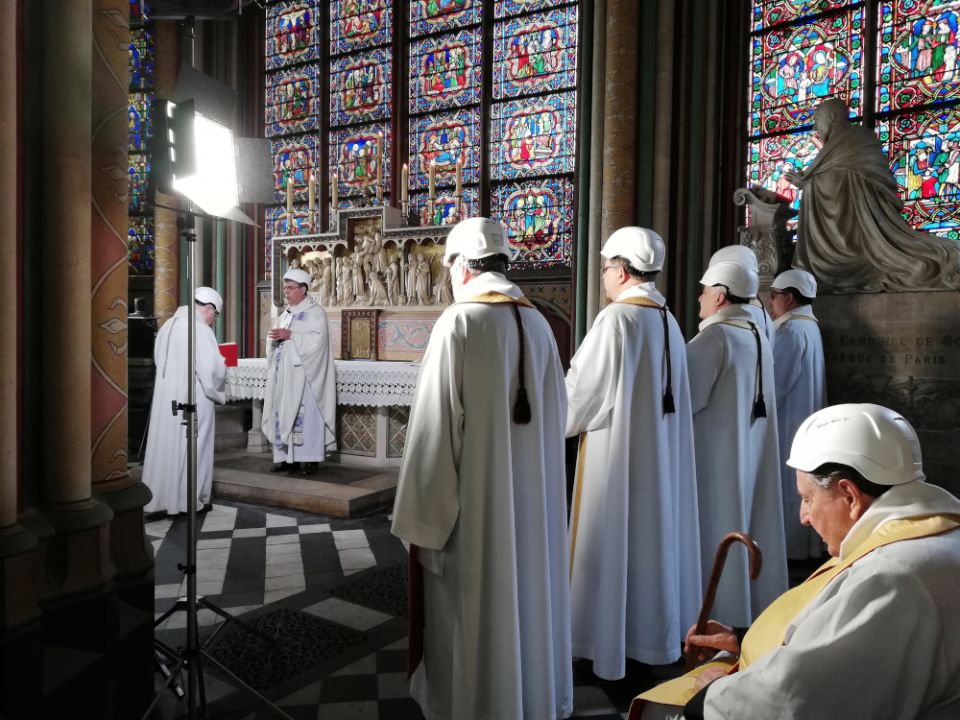 The Archbishop of Paris, Michel Aupetit, second left, leads the first mass in a side chapel, two months after a devastating fire engulfed the Notre Dame Cathedral on June 15, 2019, in Paris. (Karine Perret/Pool via AP)

Paris — Everyone, it seems, has an idea for how to rebuild Notre Dame.

Proposals for its reconstruction include topping it with a modern glass cover, an ecological garden or even a swimming pool up on the roof.

President Emmanuel Macron has pledged to reopen the 850-year-old Gothic masterpiece in 2024 — conveniently in time for the tourists attending the Paris Olympics — and caused an uproar by proposing to ignore strict preservation laws to get this done on time.

Since a dramatic blaze destroyed its roof and spire on April 15, many speeches and articles have highlighted the cathedral’s special meaning for the French as a historic site and a tourist attraction.

Most of those speeches and articles have downplayed Notre Dame’s primary identity as a church.

Paris Archbishop Michel Aupetit has used the occasion of the first mass there since the April 15 blaze to push back against all these secular plans for what is, after all, his home church.

During the service at an intact side chapel on Saturday evening, the anniversary of the cathedral’s initial dedication, Aupetit told about 30 clerical and lay worshippers that Notre Dame "cannot be reduced to a national heritage monument."

All of the invited participants wore white hard hats during their hour on what is now a chaotic construction site. Aupetit, who otherwise would have worn a bishop’s miter, took off his hard hat only at the consecration.

"This cathedral is a place of worship, that is its only purpose," the archbishop said in his sermon. "There are no tourists at Notre Dame because this term is often pejorative and does not do justice to this mystery that prompts humanity to seek something beyond itself."

Aupetit also lamented what he called "the abysmal religious ignorance of our contemporaries" who wanted to avoid any mention or sign of spirituality in the public sphere.

"Are we ashamed of the faith of our ancestors?" he asked.

Aupetit may not have much say in how the cathedral will be rebuilt.

Under French law, all churches built before 1905 are national heritage buildings and therefore public property. Local authorities are responsible for the upkeep of churches in their areas, while cathedrals belong to the state, a provision that gives national politicians a voice on issues such as expenditures for rebuilding Notre Dame.

A view of the eastern end of Notre Dame Cathedral on June 15, 2019, showing the choir area where the glass has been removed from windows now stabilized by wooden supports. The white plastic sheeting on top protects replaces the burned-away roof. The scaffolding above the cathedral was put up during the renovation work that led to the April 15 fire. (RNS/Tom Heneghan)

A live broadcast by the diocesan television channel KTO gave glimpses from inside the cathedral, which has been closed since the fire and is now surrounded by temporary walls to keep onlookers away from the worksite.

Nets were hanging over the nave to catch any material falling from above, and a pile of charred timber and other debris filled the area where the front rows for worshipers used to be. Two large holes in the ceiling showed where the falling spire had broken through.

Some of the fragile glass in the central part of the cathedral has been removed, with the remaining window frames propped up by wooden beams and covered with clear plastic. Notre Dame’s roof has been sealed with plastic sheeting laid down from the outside.

The KTO broadcast also gave Aupetit a platform to add his voice to a lively debate about the cathedral that has highlighted the many tensions in France between its once-powerful majority Catholic faith and modern political efforts to enforce a strict separation of church and state.

The fire’s embers were hardly put out before this tension emerged.

Major companies and large city governments promptly pledged large sums to reconstruct Notre Dame, leading secularists to ask why they were putting up cash for a religious building.

Macron’s promise that "we will rebuild the cathedral even more beautiful than before," and the announcement of an international competition among architects for ideas about its future brought forth proposals ranging from an exact reproduction of the roof and spire to an array of futuristic touches to add to the medieval building.

Architects who favor adding a modern touch to the roof argue that the much-beloved spire destroyed in the fire was only put there in 1859 when the architect Eugène Viollet-le-Duc renovated the cathedral to make it look more medieval.

While the government presses ahead, both politicians and heritage experts have argued firmly for a slow approach. The National Assembly has given its initial approval to Macron’s plan to ignore some preservation laws, but the Senate has rejected his accelerated approach and also insisted the fallen spire should be rebuilt just as before.

The two chambers must now work out a compromise text before it can be voted into law.

Also up for debate is whether the roof should be rebuilt with wooden supports underneath as before, or whether fireproof concrete or metal beams — which could not be seen from the outside — would be safer. No consensus has emerged on that point either.

While he says he supports Macron’s ambitious goals, Culture Minister Franck Riester, whose ministry is responsible for France’s many monuments, has been stressing how difficult they will be to realize.

"We’re still in the phase of securing the building," he said on Saturday. "The vault is still very fragile," he said, referring to the cathedral’s stone ceiling that was pierced when the burning spire crashed through it.

Architects say the vault could still come crashing down, robbing the cathedral walls of the stabilizing effect it provided.

Barbara Schock-Werner, the former chief architect of the massive Gothic cathedral in the western German city of Cologne, said after a visit to Notre Dame that the French building was still "severely injured," and nobody could yet say how long the work would take.

Riester was more optimistic, saying the experts should know in a few months the exact condition of the building and be able to estimate how much has to be done to reopen it.

"In the end, what will count is the quality of the work that’s done," he said. "That doesn’t mean we’ll have finished all the work in exactly five years. It might mean we can open the inside of Notre Dame earlier for worshippers and tourists while there might be work outside that can be finished afterward."

Because of that uncertainty, Riester could not say whether the 850 million euros ($955 million) that benefactors around the world have pledged would be enough to finance the whole reconstruction. About 80 million euros have already been paid, with many benefactors presumably waiting until the restoration projects are agreed upon to transfer their donations.