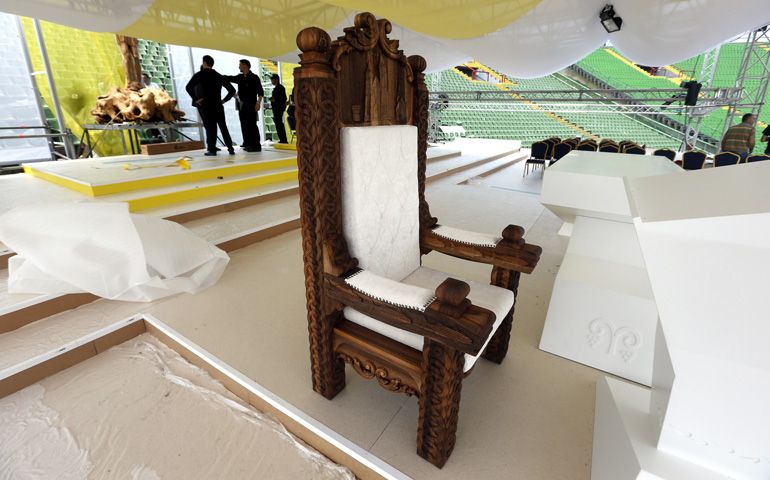 The papal chair on the stage where Pope Francis will celebrate Mass at Kosevo stadium in Sarajevo, Bosnia-Herzegovina (CNS/EPA/Fehim Demir)
This article appears in the Francis in Bosnia and Herzegovina feature series. View the full series.

Vatican City — Pope Francis will be making a whirlwind day tour of the Balkan capital of Sarajevo on Saturday in a visit the Vatican and international peace groups hope can be a global sign of the possibility for peace, reconciliation, and interreligious cooperation even after devastating violence.

Crossing the Adriatic Sea from Rome to reach the capital of Bosnia and Herzegovina, the pope will have eight meetings in less than 11 hours in the country, all focused on promoting dialogue and collaboration in a region devastated in the 1992-95 Bosnian War.

Tackling head-on the continuing issue of reconciliation -- still difficult and lingering after the war killed an estimated 100,000 people and saw the longest military siege of a city in modern times -- the pope's visit is carrying the motto "Peace be with you."

Upon arriving Saturday, Francis will meet first with local authorities before celebrating Mass at the city's Olympic stadium. He is to then meet with priests and religious of the area before hosting an ecumenical and interreligious encounter later in the afternoon.

Primarily divided along three ethnic lines, Bosnia and Herzegovina is governed by a three-person rotating presidency from each of the ethnic groups -- one Croat, one Bosniak, and one Serb.

The Catholic community is mostly Croat and makes up about 15 percent of the country's population of 3.9 million. The country is about 31 percent Serbian Orthodox and about 40 percent Muslim.

One Croatian internationally recognized for her efforts at peace-building said the pope's visit is not as much about the recent history in the region, but the continued political instability there.

"This visit is not due to the recent past, but because [there] is still a deep political crisis in this unstable region," said Katarina Kruhonja, co-founder of the Centre for Peace, Non-violence and Human Rights in Croatia.

Citizens in Bosnia and Herzegovina, Kruhonja said, "do not see achievements towards sustainable peace and stability."

"From my perspective, it is great and significant that people, regardless of religion ... welcome the visit by Pope Francis," said Kruhonja, who was a joint recipient of the Right Livelihood Award in 1998 for her center's work.

The Croatian said many in the region hope Francis' visit will work "towards influencing the churches [and] clergy to support the social process of reconciliation."

Noting that the Bosnian War left "an imprint of divisive ethnic and religious violence that is still visible today," Dennis said one concern during that time "was the role of the churches in promoting or failing to promote reconciliation, including among faith communities themselves."

"Pope Francis' visit to Sarajevo may help create an atmosphere in which the long journey to truth and reconciliation, which so many in the region earnestly desire, will be given strong support," said Dennis, who until recently also served as the director of the Maryknoll Office for Global Concerns.

The most important message that could come out of the visit, Dennis said, is "that truth, forgiveness and reconciliation are possible, even where horrific violence has deepened ethnic and religious divisions."

Ultimately, Kruhonja said, what impact the pope's visit can have on the country will depend not on the pope, but on the people and political leaders of the country.

"I hear the 'Peace be with you' as a message, but also as a gift," she said. "Pope Francis is bringing and passing the good news to local people, politicians, believers, churches that peace is with us."

"It is up to us to take it and live it," Kruhonja said.

Saturday's visit to Sarajevo will be Francis' eighth outside Italy and his first since his visit to Sri Lanka and the Philippines in January.

Themes of peace, reconciliation, and interreligious dialogue have pervaded each of his foreign visits. In Sri Lanka, the pope visited a region devastated by that country's 1983-2009 civil war, calling on all to "make reparation for our sins and for all the evil which this land has known."

In postwar Sarajevo, Francis calls on all to make peace proactively

Pope Francis heads to Bosnia as 'brother messenger of peace'

Priests must be men of joy, pope says at Mass