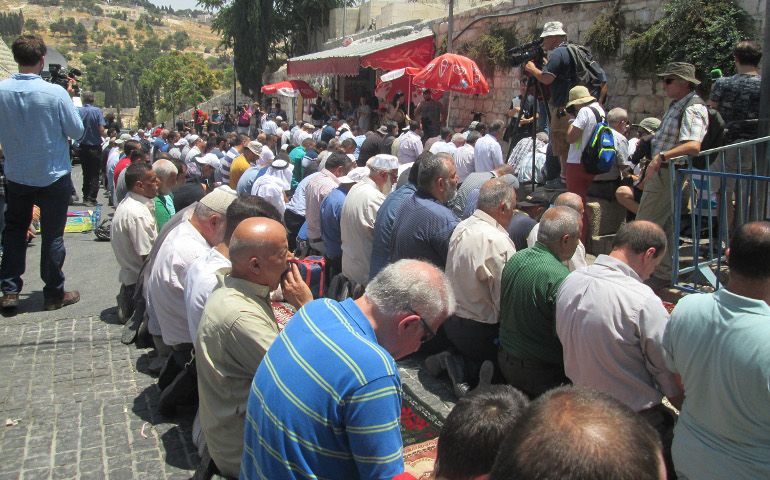 Muslim men pray just outside the Temple Mount by Lion’s Gate in protest, refusing to enter the Temple Mount until Israel removes the metal detectors it placed there following an attack last week. (RNS photo by Michele Chabin)

Jerusalem — Tens of thousands of Muslims heeded calls from their religious leaders to avoid prayers at the Al Aqsa mosque in protest of new Israeli security measures at the Temple Mount.

Only “several hundred” worshippers prayed inside the mosque at midday prayers July 21, according to Israel Police Spokesman Micky Rosenfeld. More than 50,000 pray there on a typical Friday.

Instead, thousands of Muslim men and women clogged the narrow alleyways of the Old City’s Muslim Quarter and the streets outside the Old City and prayed under the hot sun on prayer rugs they plopped on the ground.

Following the prayers, hundreds of Muslims, most of them young men and boys, threw rocks at the Israeli security personnel fanned out across the Old City. Others set fire to rubber tires and trash cans.

Two Palestinians were killed in in East Jerusalem and the West Bank, according to Israeli media, and 190 people were injured.

Muslims are enraged that Israeli police erected metal detectors at the entrance to the holy site, where Al Aqsa is located, after Palestinians shot and killed two Israeli police guarding the site last Friday.

They believe the metal detectors are an Israeli attempt to impose its sovereignty over the site known to Jews as the Temple Mount and to Muslims as the Haram al Sharif. The small hilltop is the holiest site in Judaism and third holiest in Islam after Mecca and Medina.

“It’s not an issue of security. It’s an issue of who controls the house of Allah,” said Khaled Moghrabi, a Muslim resident of the Muslim Quarter. “The Temple Mount is and must remain Muslim.”

When Israel captured East Jerusalem, including the mount from Jordan in 1967, it took over security of the site but left its day-to-day running in the hands of the Wakf, a Jordanian Islamic authority

Despite international pressure to remove the metal detectors, Israel’s high-level security cabinet decided early Friday to keep them in place, citing intelligence reports of impending attacks. It denied accusations it was trying to take over the site.

“Israel is committed to preserving the status quo at the Temple Mount and free access to the holy sites,” a statement from the Prime Minister’s Office said.

Prime Minister Benjamin Netanyahu has tried to downplay the presence of the metal detectors, noting that every visitor to the Western Wall must go through one of several metal detectors before entering the gated area. Israeli malls and government offices also have metal detectors to prevent terror attacks.

Palestinian President Mahmoud Abbas asked Jared Kushner, President Donald Trump’s Jewish son-in-law and advisor, to persuade Israel to remove the security machines, according to Israeli media reports. Abbas, like Netanyahu, fears the anger on the Palestinian street could ignite into another armed uprising.

In the crowded alleyways of the Old City’s Muslim Quarter, dozens of the more than 3,000 Israeli police deployed to keep order. 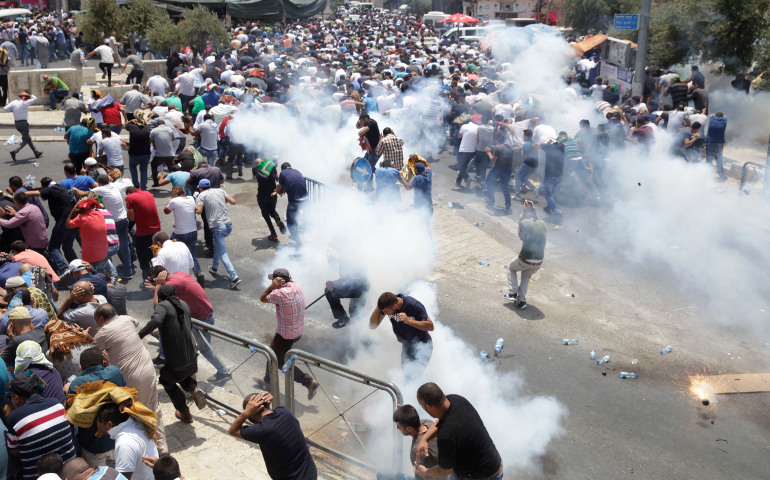 Israel’s heightened security measures were “the first step” in its attempt to change the religious status quo in the volatile city, said Khalil Abdel, a Palestinian from Louisiana who spends three months in the West Bank every year. He was standing on Elwad Street, where older men were praying on prayer mats in the middle of the alleyway as heavily armed Israeli border police looked on.

“If Israel is permitted to metal detectors in mosques, who knows what it will be later on?” he said. “This is a dangerous precedent.”

In his souvenir shop on the outskirts of the Old City’s Jewish Quarter, Danny Hadad, a Muslim, asked how Jews and Christians would feel “if someone stood in their way of entering their synagogue or mosque. Would you be happy?”

He rejected claims that Jews face the same constraints when they go through security at the Western Wall’s entrance.

Hadad said business has plummeted in the week since the attacks on the Israeli police.

“Business was good but now it’s bad. My hope is that we’ll have peace, shalom, and that we’ll be able to pray at Al Aqsa unimpeded.”

Anat Mizrachi, a Jewish Israeli doing some shopping in the Jewish Quarter, insisted that security on the Temple Mount “will keep out both Muslim and Jewish extremists. Isn’t that in everybody’s best interest?”

Touring with his wife and two small children in the Jewish Quarter, next to 2,000-year-old Roman ruins, Rob Miller, a tourist from Australia, admitted he had been “somewhat apprehensive to come today” amidst security warnings related to the Old City.

“But I’m glad we came,” Miller said. “We need not allow people who want to deter others from living in peace and harmony to accomplish their goal.”

Beyond the cease-fire: breaking the cycle of Israeli-Palestinian violence