Pope and patriarch issue deep call for unity, saying humanity depends on it 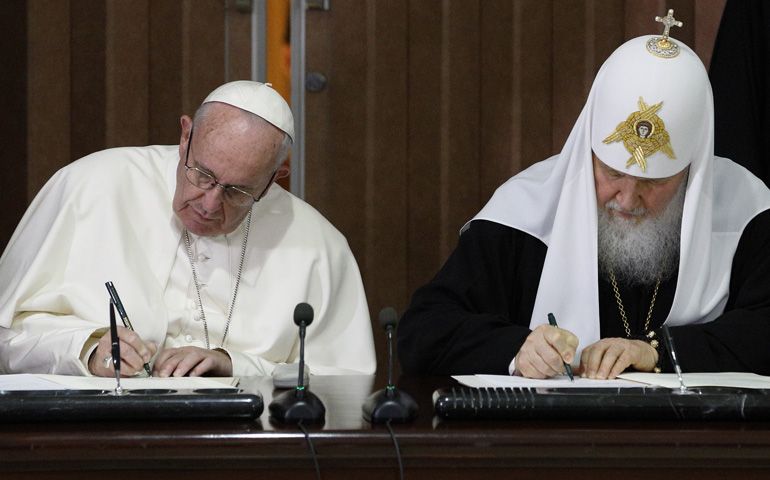 Pope Francis and Russian Orthodox Patriarch Kirill of Moscow sign a joint declaration during a meeting at Jose Marti International Airport in Havana Feb. 12. (CNS/Paul Haring)
This article appears in the Francis in Mexico feature series. View the full series.

HAVANA, CUBA — Russian Orthodox Patriarch Kirill and Roman Catholic Pope Francis have issued a deep and thorough call for reconciliation and unity amongst their two traditions, saying that the seemingly desperate state of the world requires their communities to be signs of the possibility of harmony.

In a joint statement issued after their historic first encounter on this island nation Friday, the two leaders cry out: "We are not competitors but brothers, and this concept must guide all our mutual actions as well as those directed to the outside world."

"We urge Catholics and Orthodox in all countries to learn to live together in peace and love, and to be 'in harmony with one another,'" they continue.

Later, the pope and patriarch state bluntly that the world is in need of their combined testimony to the way of the Gospel.

"This world, in which the spiritual pillars of human existence are progressively disappearing, awaits from us a compelling Christian witness in all spheres of personal and social life," state the leaders. "Much of the future of humanity will depend on our capacity to give shared witness to the Spirit of truth in these difficult times."

Francis and Kirill issued the statement Friday after concluding nearly 135 minutes of discussions in the first such meeting between a pope and a Russian patriarch after centuries of separation.

Speaking in brief remarks aboard the papal plane upon leaving Havana, the pontiff said those discussions were tantamount to "a conversation of brothers" where each "spoke with frankness" about their worries and concerns.

It was a conversation of "two bishops who spoke of the situations of their churches and the situation of the world, of the wars," said Francis.

But Francis also appeared to downplay some of the more strongly worded sections of the new joint statement, saying: "It is not a political declaration ... it is a pastoral declaration."

"It is pastoral," he said. "Two bishops that have met as pastors."

In fact, the 30-paragraph statement delves into several controversial political issues, including: the continuing violence in Ukraine; persecution of Christians in the Middle East; issues of marriage and family life; and the practices of abortion and euthanasia.

Writing on the violence in Ukraine -- where the Russian Orthodox have been accused of being too supportive of the Russian government's annexation of Crimea -- the declaration states: "We deplore the hostility in Ukraine that has already caused many victims, inflicted innumerable wounds on peaceful inhabitants and thrown society into a deep economic and humanitarian crisis."

"We invite all the parts involved in the conflict to prudence, to social solidarity and to action aimed at constructing peace," it continues.

"We regret that other forms of cohabitation have been placed on the same level as this union, while the concept, consecrated in the biblical tradition, of paternity and maternity as the distinct vocation of man and woman in marriage is being banished from the public conscience," it states.

On abortion, the statement is quite clear. "We call on all to respect the inalienable right to life," it states. "Millions are denied the very right to be born into the world. The blood of the unborn cries out to God."

The statement devotes six paragraphs to the persecution of Christians in the Middle East, calling on the international community "to act urgently" to prevent even more Christians from fleeing the region.

It also mentions the violence in Iraq and Syria, and strongly denounces terrorism and the use of religion to justify violence.

"Attempts to justify criminal acts with religious slogans are altogether unacceptable," states the declaration. "No crime may be committed in God's name."

At the beginning of their declaration, the Christian leaders write that they hope their meeting may be an example to the world.

"In a world which yearns not only for our words but also for tangible gestures, may this meeting be a sign of hope for all people of goodwill!"

Speaking of the changes facing humanity, Francis and Kirill write: "Human civilization has entered into a period of epochal change."

"Our Christian conscience and our pastoral responsibility compel us not to remain passive in the face of challenges requiring a shared response," they state.