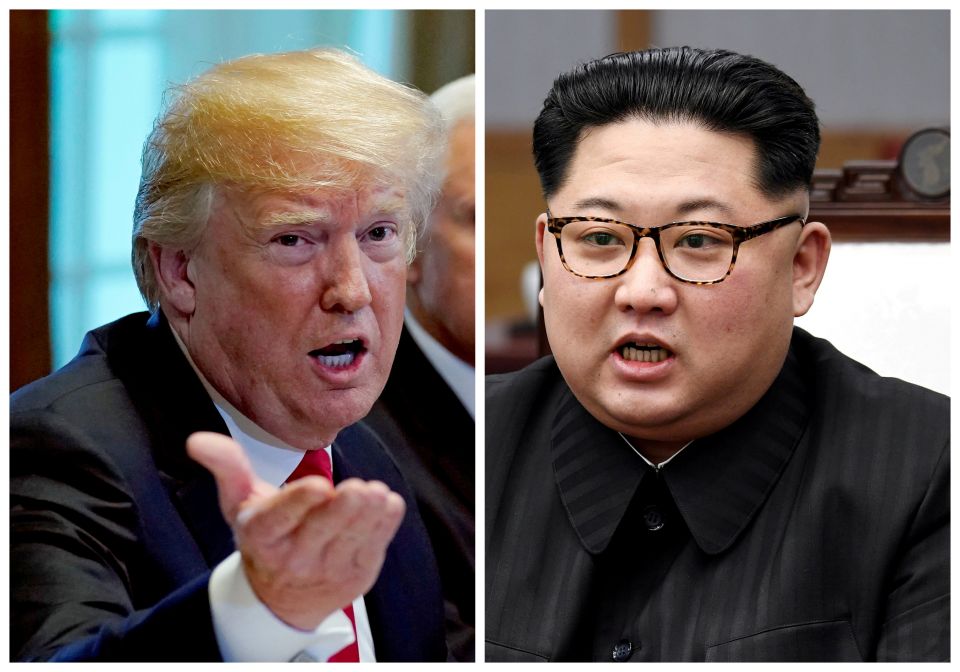 A combination photo shows U.S. President Donald Trump and North Korea leader Kim Jong Un. The two were to meet on Singapore's Sentosa Island for a historic summit June 12. It was to be the first meeting between a sitting U.S. president and a North Korean leader. (CNS/Reuters/Korea Summit Press Pool/Kevin Lamarque)

Vatican City — Leading thousands of people in prayer, Pope Francis said he hoped the upcoming summit between the United States and North Korea would lead to lasting peace.

After praying the Angelus with an estimated 20,000 people in St. Peter's Square June 10, the pope said he wanted to convey "a special thought to the beloved Korean people," and he asked the crowd to pray the "Hail Mary" so that "Our Lady, Queen of Korea, may accompany these talks."

"May the talks that will take place in the next few days in Singapore contribute to the development of a positive path that assures a future of peace for the Korean peninsula and the whole world," Francis said.

North Korean leader Kim Jong Un and U.S. President Donald Trump were to meet on Singapore's Sentosa Island for the historic summit June 12. It was to be the first meeting between a sitting U.S. president and a North Korean leader.

Before leading the crowds in praying for the summit, the pope reflected on the Sunday Gospel reading in which Jesus confronts "two types of misunderstandings" from the scribes and his relatives.

By accusing Jesus of being possessed and using the power of the "prince of demons" to cast out demons, the scribes fell into a great sin of "denying and blaspheming God's love that is present and works in Jesus," he said.

Blasphemy, the pope said, "is a sin against the Holy Spirit and the only unforgivable sin because it comes from a closure of the heart to God's mercy that acts in Jesus."

Francis told Christians they should go to confession immediately when they are tempted to speak ill of another person because "this attitude destroys families, friendships, the community and even society."

"Here there is a truly mortal poison: the premeditated malice one uses to destroy the good reputation of the other. May God free us from this terrible temptation," he said.

Another misunderstanding described in the Gospel reading, the pope continued, comes from Jesus' family who believed his "new itinerant lifestyle seemed like madness."

In the Gospel, after Jesus was told that his mother and his brothers and sisters were asking for him, he responds, "Here are my mother and my brothers. For whoever does the will of God is my brother and sister and mother."

Jesus' response, the pope explained, is not a lack of respect toward his mother but instead it is "the greatest recognition, because she is precisely the perfect disciple who obeyed God's will in everything."

Francis said that Christ's answer also showed that Christians are united not by family bonds but by their "faith in Jesus."

"Welcoming Jesus' words makes us brothers and sisters, it makes us members of Jesus' family," the pope said. "Speaking ill of others, destroying other people's reputations, makes us part of the devil's family."