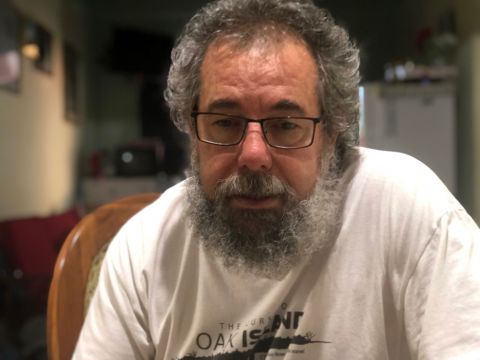 Scalabrinian Fr. Mauro Verzeletti pictured Jan. 12, 2020, at San Antonio Parish in Soyapango, El Salvador, discuss the worries he has over the treatment of migrants headed toward the U.S. in the latest caravan that formed in mid-January. A few days later, Verzeletti, director of the Casa del Migrante shelter in Guatemala, received death threats for his work providing migrants with humanitarian aid and is under round-the-clock protection as authorities and others worry about his safety. (CNS/Rhina Guidos)

Washington — A Catholic priest helping feed and shelter migrants in Central America has filed a complaint with Guatemalan authorities after he and his staff received death threats for providing humanitarian aid for the latest mass of migrants headed toward the United States.

Verzeletti has been a vociferous critic of U.S. immigration policy involving Central America, including with Guatemala's former president Jimmy Morales, who struck a deal with U.S. President Donald Trump to designate Guatemala a "safe third country," meaning that migrants who pass through Guatemala headed north must first seek asylum there instead of heading to the U.S.

It is a deal that newly minted Guatemalan President Alejandro Giammattei, who took office Jan. 14, opposes.

Guatemala has one of the highest murder rates in Central America and is considered one of the most dangerous countries not at war in the world. Its citizens are fleeing north en masse with others from the neighboring nations of El Salvador and Honduras because of a combination of violent conditions, lack of economic opportunity, the effects of climate change and other factors.

Because many lack resources, organizations affiliated with the Catholic Church, such as the one Verzeletti runs, provide essential humanitarian help for those moving through.

Verzeletti, who is originally from Brazil, belongs to the religious order known as the Scalabrinians, whose charism is to help migrants. He has runs shelters throughout Latin America and has called attention to the immigration crisis through the lens of the Catholic Church, which calls for taking a humanitarian approach and treating the root causes of immigration as a solution.

He also has criticized agreements that Trump has made with the government of Mexico called the Migrant Protection Protocols, or the "Remain in Mexico" policy, and the recent use of force against migrants by Mexican forces seeking to deter those trying to cross the border between Guatemala and Mexico.

In El Salvador, where he lives part of the time, he has organized a "Migrant Via Crucis" during Lent, weaving themes of the situation experienced by Central American migrants into the Stations of the Cross and what many migrants suffer on their way to the U.S.

Through his writings and other commentary, he often calls out governments for their lack of commitment to provide living conditions for the poor and has shed light on attacks — physical, political and policy-related — lobbed at migrants.

Representatives from international aid organizations denounced the threats against the priest, including Carlos Carrera Cordon, head of Guatemala's UNICEF, who expressed his support for the priest and the work of his staff via Twitter. Carrera said his organization "energetically" condemns the threats and praised the priest and his staff for caring "day and night" for children and families who are migrating.

Verzeletti also runs other Casa del Migrante shelters in Central America, helping not just those headed north but also people displaced within their own countries and protecting those who have received threats of violence from gangs or other criminal factions.

Now he finds himself involved in a threatening situation of his own, he told CNS, not just because it deals with his safety, but also the safety of his staff.

He said he had received threats before, but the recent ones were "very harsh and blunt" and said he worries also for the safety "of those around me."

"This is a very complex situation, and I have to be careful so that nothing happens to anyone," Verzeletti told CNS.

Mexican bishops call for migrant assistance at their southern border