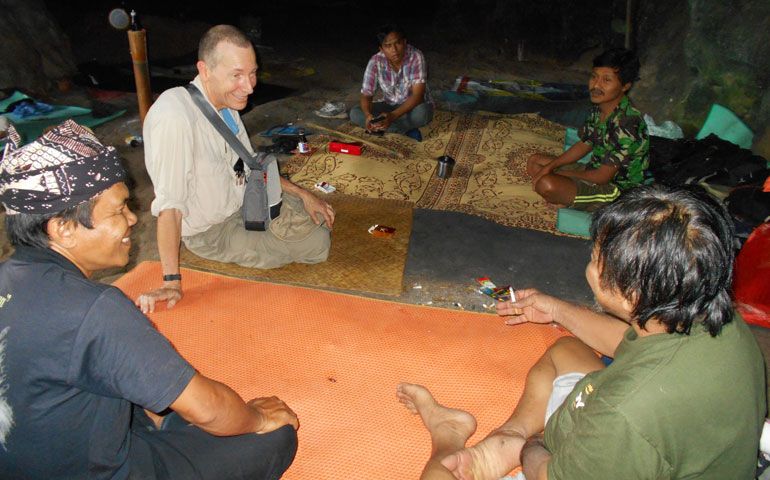 I make a living teaching courses on Islam. I also happen to be a Catholic. No surprise, then, that I'm interested in Muslim-Christian relations and the status of non-Muslim minority populations in Islamic societies.

Which makes Indonesia my favorite place for fieldwork. Home to the world's largest Muslim population, it legally acknowledges the practice of five faiths: Islam, Hinduism, Buddhism, Confucianism and Christianity (Protestantism and Catholicism are each individually recognized). Your KTP (Kartu Tanda Penduduk, or national identity card) indicates which of the five you belong to. Leaving the space blank or requesting an alternative designation -- "agnostic," say, or "atheist" -- isn't an option.

The majority of Indonesians -- over 85 percent -- are Muslim, many of them adherents of a tolerant form of Islam that blends Sufi mysticism with the region's Hindu-Buddhist legacy. But lately, traditional Indonesian Islam has come under attack.

Saudi-inspired missionaries, taking their cue from Islamists in the Middle East, call for the "purification" of Indonesia and denounce traditional Muslims as musyrik (polytheists, a Quranic term referring to those who ascribe divine partners to Allah). The Jakarta-based Islamic Defenders Front calls for the imposition of Shariah, or Islamic law, nationwide and has staged violent attacks on gays, secularists, prostitutes, evangelical Christians, and members of "deviant" Islamic sects.

Disturbing news. Fortunately, the old forms of worship still survive, and a good place to find them is Alas Purwo, one of the most secluded locales on the island of Java. Comprising savannah grasslands, mangrove swamps, oceanfront beach, and thickly forested jungle, Alas Purwo is many hours' drive, and a world away, from the turmoil of urban centers like Jakarta.

Recently, I was lucky enough to go to Alas Purwo. My goal was to visit Goa Istana, the Palace Cave, a hilltop grotto within this forest that for centuries has been used for meditation by ascetic practitioners.

My guide and I walked along a path that led past thickets of towering bamboo. Macaques and lutung-lutung, or leaf-monkeys, leaped from branch to branch in the trees overhead. Above us soared a sea eagle. I glimpsed a peacock in the brush.

This impressed me. On islands like Sumatra and Borneo, poachers have trapped every creature they can and shipped many -- especially pangolins -- to China, to feed that country's ever-expanding appetite for animal body parts associated with Chinese traditional medicine.

Why, I asked, have so many animals survived here in Alas Purwo?

Because, my guide explained, this place is considered angker (eerie, haunted).

He saw he had my interest, and continued. Alas Purwo, he said, is full of penunggu: guardian nature-spirits that inhabit the tallest and noblest of the trees that surrounded us everywhere along the trail. They sense the intentions of those who enter this forest, he said, and if people enter with bad intentions, well: Mereka berputar-putar dan tidak pernah keluar ("They'll go round and round and never get out").

The result, he concluded, is that poachers are afraid to come here and harm the wildlife.

By now, we'd reached our goal. Worn steps led us uphill past statues of club-bearing guardian demons. As its name suggested, the Palace Cave was spacious. Once our eyes adjusted to the dark, we saw blankets and matting spread out on the ground, and seated quietly within the cave was a group of five men.

Not at all put out by the intrusion, they welcomed us warmly. One, a friendly man in his 40s named Sri Wijoyo, explained they had come on foot from Surakarta, in central Java -- their journey had taken a month -- to meditate here and acquire kesaktian, or mystical power, "by means of which," said Wijoyo, "we can help the many people who need help."

I asked what religion they belonged to. "Islam KTP," they replied -- Islam according to their identity cards. But they also thought of themselves as members of agama Jawa primitif ("Java's primordial faith," that is, Javanese animism).

They had been bertapa, secluding themselves as hermits, here for several weeks already, Wijoyo said, and in that time they had met fellow pilgrims who had come to the Palace Cave from various parts of Bali and Java, some of them Muslims, others Hindus or Christians. But all honored this site.

We chatted for hours amid occasional distractions -- bats flitting by in the gloom, and marauding monkeys that snatched a bag of food. Wijoyo outlined what Javanism meant to him: prioritizing contemplative quiet over noisy display, and the halus (the refined and the spiritual) over the kasar (that which is coarse or crude).

Javanists, he said, prefer coexistence to confrontation, and they revere the many points in the island's landscape -- caves, mountaintops, ancient temples -- where cosmic forces are made manifest, no matter what religion is associated with these sites.

In fact, on this same trip, I visited one such temple, which, like Alas Purwo, is also located in east Java. This is a 14th-century Hindu shrine called Panataran, located at the foot of a still-active volcano, Mount Kelud.

Like Alas Purwo, Panataran is said to be protected by penunggu spirits; also like Alas Purwo, this place is used as a place of prayer by Indonesians of many faiths. Intact and undamaged on the walls of this site are old carvings of goddesses, devils and winged serpent deities that bridge the animal and human realms.

As I walked about, the thought came to me: Imagine how long a place like this would last in today's Afghanistan, or the Iraqi-Syrian domain of the newly formed Islamic State caliphate. Whether it's the giant statues of the Bamiyan Buddhas or the tombs of Shiite and Sufi saints, the Taliban and Islamic State have destroyed wherever they can both non-Islamic monuments and Muslim sanctuaries deemed heretical.

I voiced this thought to a worshiper I met at Panataran, a young man who identified himself as a Muslim but who also revered the shrine's resident penunggu. He said he was well aware that militantly minded preachers talked of "Islamicizing" Java.

But maybe it could work in the other direction, he mused. Maybe people like himself, Muslims who were also adherents of the island's "primordial faith," could exert some influence.

Kami mau menjawakan Islam, he said: "We would like to 'Javanize' Islam."

To which I could only reply: Amen, friend. Amen.

[David Pinault is a professor of religious studies at Santa Clara University. His latest book is Museum of Seraphs in Torment.]