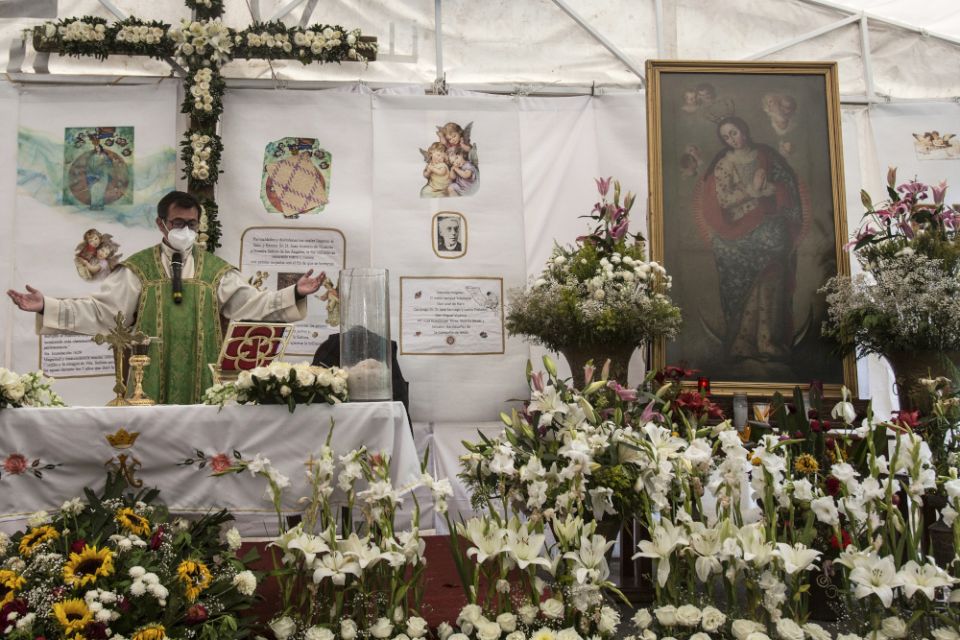 Fr. Adrian Vazquez celebrates an outdoor Mass under a white tent outside the quake-damaged Our Lady of the Angels Church, in the working-class Guerrero neighborhood of Mexico City Aug. 7. Pictured right is a wax painting of Our Lady of the Angels, a replica of the one on the wall inside the church, home to the revered image of the Virgin Mary, its history dating to the end of the 16th century. (AP/Ginnette Riquelme)

Mexico City — Under a white tent on the street outside Our Lady of the Angels on a recent Sunday, Fr. Adrián Vázquez led parishioners seated in pews and plastic chairs in celebrating 10 a.m. Mass, flanked by piles of rubble from the sanctuary left there by a deadly earthquake nearly five years ago.

To the left stood the still-broken church, with deep cracks in the walls, its half-collapsed dome supported by scaffolding and a leaning column. Behind the priest was a wax painting of the Virgin Mary, a replica of the one on the wall inside the building and all but out of sight for the faithful.

But Vázquez's excitement was so great that it couldn't even be hidden by his pandemic facemask as he delivered the good news: Just weeks before the anniversary of the Sept. 19, 2017, quake, work was finally resuming on restoration of the Catholic temple, which houses the treasured Virgin considered miraculous for having survived floods and earthquakes.

He exhorted parishioners to support the church as the restoration progresses, saying, "The wait is not passive, and the temple is not going to be rebuilt on its own or only with the help of the government. How can we all help?"

Set in the working-class residential neighborhood of Guerrero and carrying one of Mary's titles, Our Lady of the Angels has a history dating to the late 16th century.

In 1580 a painting of the Assumption of the Virgin arrived in the area floating on floodwaters and ended up in the mud on the property of an Indigenous cacique, or chief, known as Izayoque, according to a book about the church written by Fr. José Berruecos about a century ago. The artwork depicts the Catholic belief that Mary, mother of Jesus, ascended into heaven, body and soul.

"In the midst of the floods, with all the evil they caused," Berruecos wrote, "against that background of darkness and desolation, the image of Our Lady of the Angels appears in full light as a rainbow in the midst of the storm."

Izayoque was so taken by the image on the badly damaged canvas that he had a chapel built in the Virgin's honor with the painting reproduced on an adobe wall. The current sanctuary was finished some 200 years later, with the Virgin still gracing the oratory.

According to the National Institute of Anthropology and History, or INAH, Our Lady of the Angels is the second most important church in Mexico City after the internationally revered Basilica of Guadalupe, which is home to its own holy image of the Virgin and draws millions of pilgrims each year. 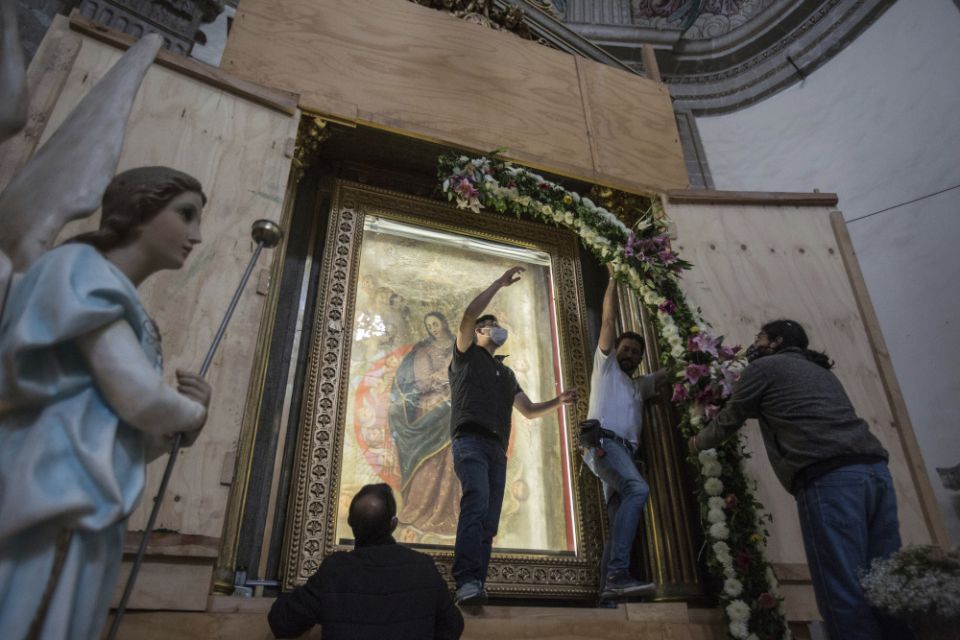 Parishioners remove a portion of a flower arch surrounding a painted copy portraying the Assumption of the Virgin inside the quake-damaged Our Lady of the Angels Catholic Church, in Mexico City Aug. 7. During restoration efforts the image is boxed off in a protective framework and covered by glass and wood panels that open and close like a book. (AP/Ginnette Riquelme)

In an interview, parishioner María González's voice cracked as she recalled the Sunday in 2017 when the dome caved in. As her cellphone lit up with text messages about the collapse, she and other neighbors rushed to the site to meet Fr. Cirilo Colín, who at the time led the parish.

"It made a tremendous noise, like an explosion," González said. "When we saw the dome, we all started to cry. ... It was a miracle that no one died."

The church had been damaged five days earlier by the quake, which killed about 360 people, collapsed dozens of buildings and left many more damaged and destined for demolition.

INAH, which is funding and carrying out the restoration project, began work on Our Lady of the Angels in September 2019. Phase one involved stabilizing the structure with steel supports to prevent further loss, and covering the collapsed dome to keep out rainwater.

That ended in December 2020, and since then it has been a long wait for phase two, which began Aug. 8. At this stage INAH is focusing on restoring a chamber behind the main altar that holds religious and historic artifacts, with the goal of protecting them and also rehabilitating a space that will be used to support the bigger restoration of the nave. 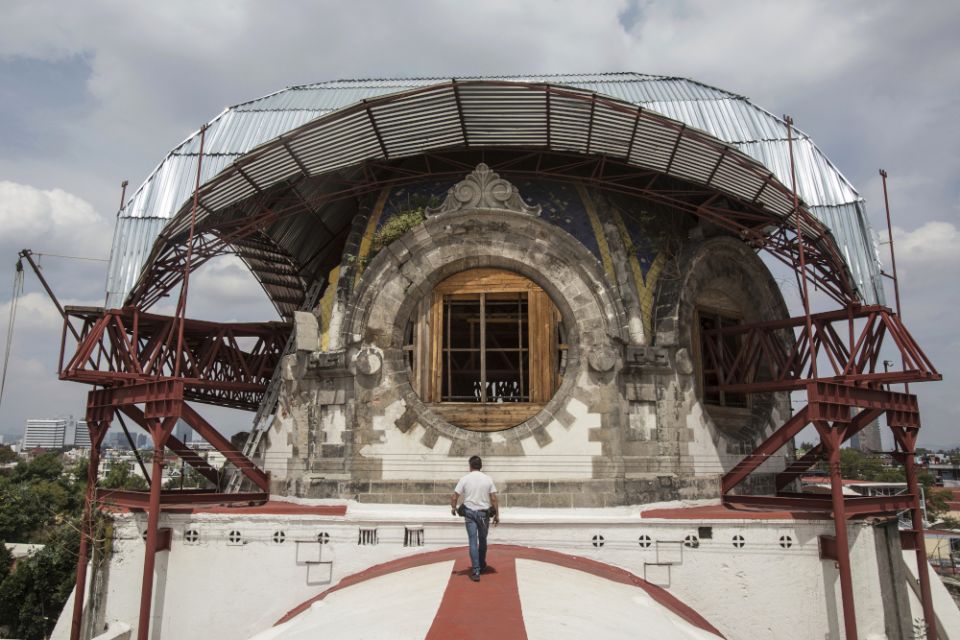 Parishioner Carlos Jimenez Taboada walks on the exterior of the central nave towards the quake-damaged dome of the Our Lady of the Angels Catholic Church in Mexico City, Mexico Aug. 7. Set in the working-class residential neighborhood of Guerreroand carrying one of the Virgin Mary's titles, Our Lady of the Angels' history dates to the end of the 16th century. (AP/Ginnette Riquelme)

For now, the image of the Virgin is hidden behind scaffolding, boxed off in a protective framework and covered by glass and wood panels that open and close like a book.

Only a handful of people get to see the Virgin up close, and sporadically so: Sometimes those who help the priest with services and daily chores place flowers before her, or he lets small groups in for a few minutes to look upon the image and pray.

The Virgin returns their gaze with a peaceful expression, draped in a blue cloak in front of a gold background, hands joined together in front of her chest.

Given the fragility of the adobe walls, she is unable to be moved, meaning her destiny is tied to that of the building.

Vázquez was assigned to replace Colín in late 2019 and tasked with leading what he called a "comprehensive recovery" of the parish, both physically and as a spiritual community — since the building was damaged, many parishioners began attending other churches.

The 38-year-old priest is constantly urging his flock to invite others to the congregation, working to improve its social media presence and streaming Mass services via cellphone. He has also spent part of his own savings to pay for repairs to electrical wiring, touching up walls and other details.

While there's still no fixed end date for the restoration, Vázquez said the church is already showing signs of rebirth: On Aug. 2, the feast day of Our Lady of the Angels, at least 900 people packed the celebrations on the street outside.

Parishioners are pitching in, too.

Rosa María Ordoñez, 76, who first attended as a child with her grandmother, is selling clothes and other donated goods to raise money for the church. Other parishioners are teaching catechism or doing chores like cleaning.

María Elena Corona, 85, also helps out however she can. Recently she wrote and illustrated signs explaining the Virgin's history for display outside the church.

Corona, who first set foot in the sanctuary half a century ago, has moved several times since but always found herself drawn to return — including in 1985, when she moved back from the United States after an even more devastating quake that killed tens of thousands of people and first put cracks in the church's walls. She settled in a nearby neighborhood and resumed attending Mass at Our Lady of the Angels.

The Virgin "does not let me go," Corona said.

As the recent street Mass came to an end, Vázquez asked the faithful to turn to their left. That meant they were facing the Virgin's perch inside the shattered temple, even if they couldn't see her holy visage.

"Let us sing," the priest beseeched them, "for the Virgin."

Editorial: Global vaccine equity is a matter of life and death, for all of us

German bishop rules out general invitation to Communion at congress