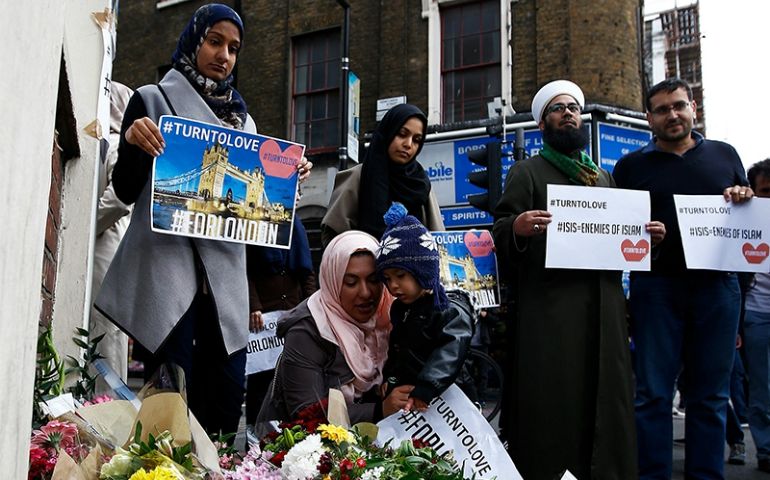 Muslims pray at a floral tribute near London Bridge, after attackers rammed a hired van into pedestrians on London Bridge and stabbed others nearby killing and injuring people, in London on June 3, 2017. (Reuters/Peter Nicholls)

London — Religious leaders prayed for London after another terrorist attack in Britain left seven dead and scores injured on the eve of the Christian holiday of Pentecost and during the Muslim holy month of Ramadan.

The attack, in which a van was deliberately driven into pedestrians on London Bridge and the three men in the van then ran amok with knives, stabbing passers-by, took place less than two weeks after the bomb attack in Manchester and just over two months after an Islamist attack in Westminster at the heart of Parliament.

The three assailants, who were all shot dead by police, are understood to be Islamist terrorists, with witnesses saying they heard one of them shout “This is for Allah,” as he stabbed one victim.

The deadly events coincide with two of the holiest times in the Muslim and Christian calendars: Ramadan and Pentecost, which fell on June 4, and left religious leaders shocked at not only the violence but the timing.

Harun Khan, the secretary general of the Muslim Council of Britain, condemned the attacks in his home city in the strongest terms. "That this should happen in this month of Ramadan, when many Muslims were praying and fasting only goes to show that these people respect neither life nor faith," he said.

Christian leaders who expected to spend Sunday celebrating the feast of Pentecost instead turned their attention to the attacks that took place a day earlier in the London Bridge area, which has become one of the capital’s most popular neighborhoods for restaurants and bars.

Archbishop of Canterbury Justin Welby tweeted: "Again we grieve with wounded and bereaved, as they face pain and struggle. Today we pray 'Come Holy Spirit', Spirit of peace and of healing."

Again we grieve with wounded and bereaved, as they face pain and struggle. Today we pray 'Come Holy Spirit', Spirit of peace & of healing

"There is a risk of our nation becoming a people who flee danger and try and lock themselves away when our culture, our history and our calling is to be those who overcome danger and overcome those who cause danger," Welby said.

Road closures continued around the London Bridge area as police and forensic officers searched for evidence, cutting off nearby Southwark Cathedral and forcing its diocesan Pentecost service, to which people from all over the south London diocese were due to travel, to be moved a few miles away.

At the nearby Catholic cathedral of St. George’s, which was not affected by the cordon, at all Masses a minute’s silence was observed and prayers offered for those killed and injured in the attack.

Political leaders also expressed outrage, with Prime Minister Theresa May saying there had been too much tolerance of extremism, interpreted by political analysts as a reference to terrorists being able to get their messages out on the internet.

Community leaders urged calm, but at Speakers' Corner in London’s Hyde Park — one of the capital’s most famous places for public speaking — there was evidence of growing tensions in the capital as a Muslim speaker holding a copy of the Quran was denounced by some passers-by as "a disgrace."

World | Religious leaders shocked by attack on Ramadan and Pentecost