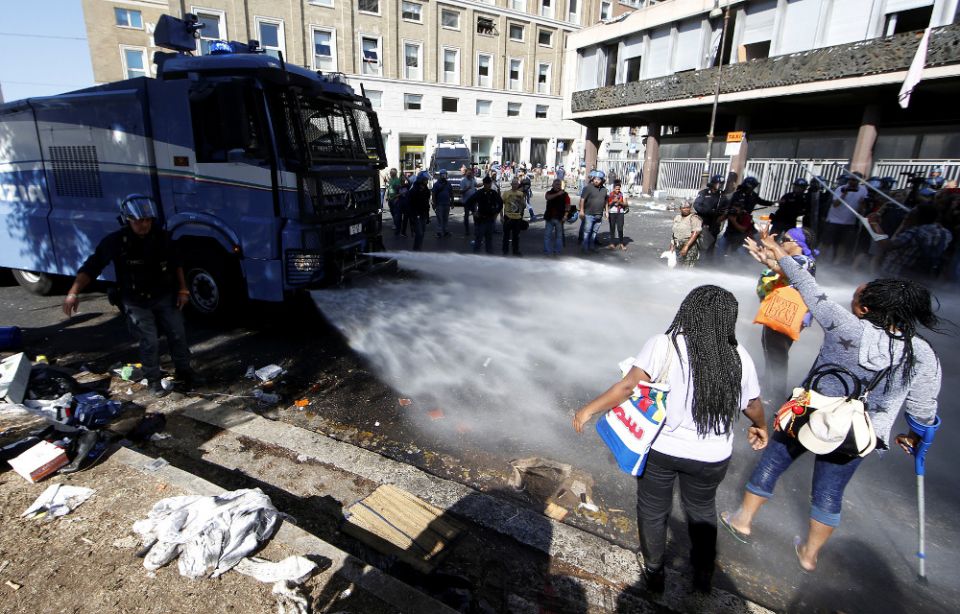 Italian police use a water cannon Aug. 24 as they clash with protesting refugees who had been forcibly removed from a building where they had been living in Rome. (CNS/Yara Nardi, Reuters)

Rome — While government officials had an obligation to find a safe and dignified alternative for housing some 800 refugees squatting in an abandoned building in the center of Rome, the way police went about it led to violence, said Rome's Caritas agency.

Police evicted hundreds of refugees from the building Aug. 19. About 100 people, mostly Eritreans and Ethiopians with official refugee status, had been camping in a public square outside the building since then.

When police went back Aug. 24 to clear the square near Rome's main train station, violence erupted. Police said they were forced to use water cannons after the refugees started throwing things at them and hitting them with sticks.

Caritas, the Rome diocese's official charitable organization, said everyone knew that something needed to be done about the building, which had been occupied by the refugees since 2013. Living conditions inside were dangerous and unhygienic, Caritas said.

But "the way in which this happened, without any planning and acting as if it was an emergency, could do nothing other than lead to the escalation we saw this morning," the Caritas statement said.

The humanitarian organization Doctors Without Borders, which has had a medical team in the square since Aug. 19, said 13 refugees were treated for injuries, and five of them were sent to the hospital by ambulance, after the police action Aug. 24.

Humanitarian groups said the refugees had refused to leave the square because they wanted to stay close to their family members — the roughly 100 women, children and elderly refugees the police had allowed to stay inside the building.

"Because of the high number of people involved, the presence of children and family groups and the history of suffering and violence these people have endured, an intervention of this kind required specific social interventions" as part of a larger program regarding emergency and long-term housing for at-risk populations in the city, Caritas said.

"Unfortunately, as the 'Mafia Capitale' facts demonstrate, these policies have been lacking in our city for years, and groups and organizations profit from it," the statement said. "Mafia Capitale" refers to a scandal involving city officials giving organized-crime rings contracts to provide city services, including for housing refugees, which they never provided or were grossly substandard.

Cardinal: Catholics must protest migration policies when kids are at risk