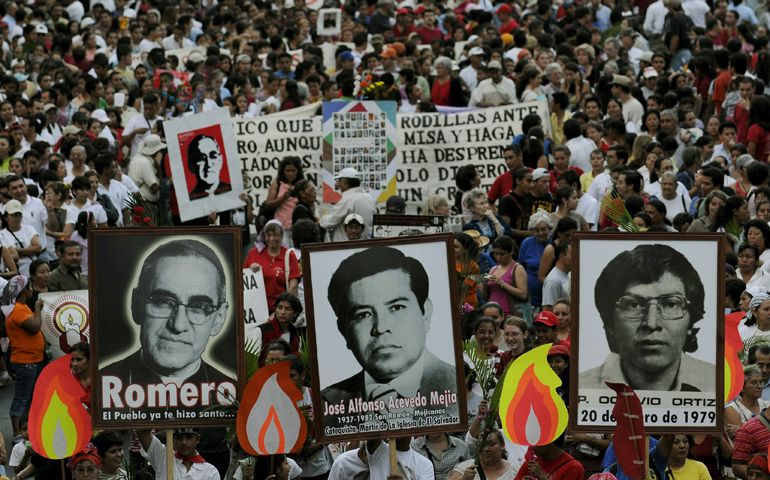 Salvadorans carry a photo of Archbishop Oscar Romero and other victims during a 2008 rally in San Salvador to commemorate the 28th anniversary of their deaths. (CNS/Roberto Escobar, EPA)

The recent Salvadoran Supreme Court decision striking down an amnesty law that has blocked prosecutions for war crimes for more than 20 years threatens to unsettle a fragile political stability that has been achieved in a country torn by drug-gang violence and one of the highest murder rates in the world.

The July 13 ruling dissolves immunity for members of the military, paramilitaries and rebel forces who committed war crimes as well as for those who gave the orders or had command responsibility.

It also clears the way for victims to seek reparations and for the government to prosecute atrocities committed during the country's 12-year civil war that ended in 1992 under an agreement brokered by the United Nations. The violence killed some 75,000 civilians and disappeared another 8,000.

While the court ruling would logically be viewed as a victory for human rights activists and for those who have advocated for justice since war's end, many -- including some who have sought the repeal of the amnesty law -- have greeted the news with caution. In the complex politics of post-war El Salvador, the ruling is seen as potentially destabilizing or, as one observer put it, as a "double-edged sword."

Some have questioned the timing of the conservative court's ruling coming after all these years, seeing it as a veiled coup attempt that could ensnare the country's president, Salvador Sánchez Cerén, a former rebel commander who had opposed and campaigned against the amnesty law.

The right-wing Nationalist Republican Alliance (ARENA) party had pushed through the amnesty law in 1993 just days after a U.N. Truth Commission reported that the U.S.-armed and trained Salvadoran military, along with its affiliated death squads and paramilitaries, had committed 85 percent of the atrocities during the war, while the Farabundo Martí National Liberation Front (FMLN), now the governing party, was responsible for five percent.

Héctor Perla Jr., a senior research fellow at the Washington-based Council On Hemispheric Affairs, told NCR that the ruling is a major step toward breaking the country's culture of violence and impunity.

"But my fear," he said, is that the ruling "lays the foundation for a right-wing attempt to bring down the Sánchez Cerén administration through non-electoral and undemocratic means in a way that completely perverts the longstanding demands for justice from the victims." In a way that is similar, he said, "to how the right-wing in Brazil used anti-corruption charges to perpetrate an attempted "soft-coup" against President Dilma Rousseff."

In a speech to the nation after the ruling was announced, Sánchez Cerén criticized it as a threat to the "fragile coexistence" that gives the country what stability it has.

The right has had a history of threatening to bring charges against former Farabundo Martí National Liberation Front leaders if the amnesty law were voided, even though the Truth Commission found them liable for only five percent of the war's atrocities.

Almost as soon as he beat the odds in 2014 to become the first former Marxist elected as El Salvador's president, Sánchez Cerén began backing away from his campaign pledge to seek the repeal of the amnesty.

But he had taken office without his party controlling the Legislative Assembly, making it all but impossible for him to repeal the law legislatively.

A former public school teacher who became a commanding general of the FMLN, Sánchez Cerén won the election against the right-wing ARENA candidate Norman Quijano, a staunch amnesty supporter, by a mere 6,300 votes.

Quijano immediately cried election fraud and called on the military to prevent Sánchez Cerén from taking office. But Salvadoran Defense Minister Gen. David Munguía Payés quickly allayed fears by saying the military would not intervene and would abide by the decision of the Supreme Electoral Authority.

Munguía Payés, whom Sánchez Cerén kept on in his administration, also criticized the Supreme Court's ruling, suggesting it would turn into a "witch hunt," at a time when the country is under siege from drug gangs.

The country of six million people currently has a murder every hour on average. Not unlike the days of the civil war, relatives of missing loved ones come to the morgues looking at bodies found daily in unmarked graves, often dismembered with machetes.

The years of impunity, Perla said, go the heart of why "the violence has actually escalated in the postwar period -- the amnesty law issued a de facto decree that proclaimed that the use of violence against your adversary was a legitimate way to resolve differences."

In any case, the Supreme Court's amnesty ruling is likely to make it even more difficult for Sánchez Cerén to govern and push through his agenda aimed at promoting education and health programs to curb poverty and illiteracy. Even spurious charges against him could undermine his government.

But the amnesty ruling is not the only Supreme Court ruling that has increased pressure on him. One recent ruling nullified progressive tax increases and debt renegotiation aimed at generating funds for anti-crime measures.

Even retired Gen. Mauricio Ernesto Vargas, who represented the military in the government's dialogue with the FMLN during the war, called the amnesty ruling another "destabilizing" element in a polarized country.

Miguel Montenegro, director of El Salvador's Human Rights Commission who himself was tortured by government forces, said his hope is that mechanisms will be put in place so the past is not repeated.

David Morales, El Salvador's current human rights ombudsman, called the ruling a victory for the victims. If prosecutors and judges pursue the opening, he said, it could possibly bring about reconciliation.

There has been no national reconciliation, Perla said, because there has never been any healing. The amnesty law had "precluded any accountability, remorse, request for forgiveness and efforts to make amends … or any truth-telling, restitution, vindication and empowerment of victims."

But so far, there is little evidence the country has the political will to confront the past and revisit the horrors of one of the most savage wars in recent Latin American history.

Douglas Meléndez Ruiz, El Salvador's attorney general, has yet to announce any specific plans about investigating and prosecuting the war crimes cases.

He has, however, already added to Sánchez Cerén's troubles by arresting police officials who helped carry out a gang truce and is allegedly targeting top mediators including Munguía Payés, who had helped broker the truce back in 2012, according to a May 20 New York Times story. A former official with the Organization of American States who helped ensure the truce told the paper there's no rational reason for the attorney general's action, that "it's all political."

Meanwhile, Auxiliary Bishop José Gregorio Rosa Chávez of San Salvador has called for calm in the wake of the Supreme Court ruling, saying Salvadorans should not overreact, but seek reconciliation, not revenge.

The church entered the fray over amnesty back in 2013 when conservative San Salvador Archbishop José Luis Escobar Alas caused an international outrage by shutting down the widely respected human rights office, Tutela Legal, less than a month after the Supreme Court agreed to consider the constitutionality of the amnesty law.

The office, founded by slain Archbishop Oscar Romero, had evidence on thousands of killings and atrocities that could be used to prosecute war criminals.

Romero's is one of the 30-plus cases documented by the U.N. Truth Commission that the Supreme Court specifically suggested prosecutors pursue first. The other cases include:

Whether El Salvador joins the ranks of other Latin American countries like Peru, Argentina and Chile that have abolished amnesty laws and prosecuted war crimes may depend to some degree on the cooperation of Washington.

The US holds tens of thousands of documents that could help Salvadoran prosecutors. Human rights advocates have called on the Obama administration to declassify them, saying it's the least the U.S. can do, given the extent of its complicity in the country's civil war.

The United States not only sent El Salvador more than $4 billion during the war, but trained thousands of its officers at the U.S. Army's School of the Americas, now the Western Hemisphere Institute for Security Cooperation, which used training manuals advocating torture and execution from 1982 to 1991.

SOA graduates were linked to every major atrocity documented in the U.N. report, from the 1980 murder of Romero to the 1989 Jesuit massacre.

El Salvador struggles to come to terms with violent past