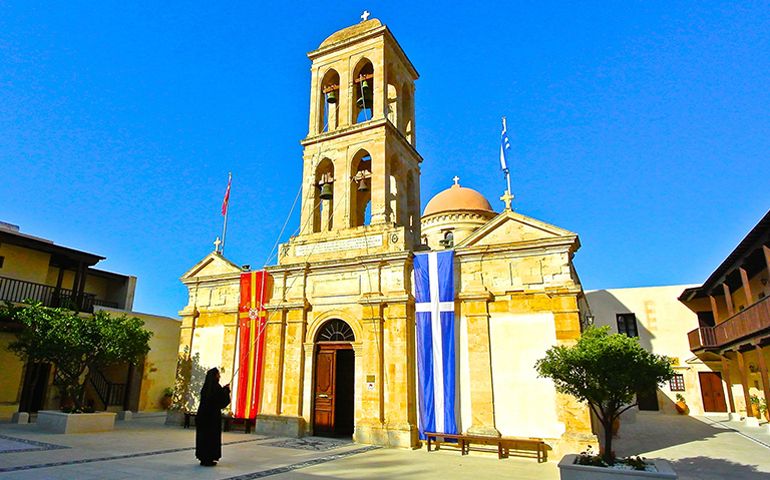 A Greek Orthodox monk rings the bells for vespers at the church of the Gonia monastery in Kolymvari, Crete. The Orthodox Council in June met nearby and held its morning liturgies in this church. Photo taken on June 22, 2016. (RNS/Tom Heneghan)
This article appears in the Pan-Orthodox Council feature series. View the full series.

The Russian Orthodox church, whose boycott of a major summit of Orthodox Christian leaders in Crete last month threatened to slow down efforts to promote greater unity, has declared the meeting "an important event in the history of the conciliar process."

The church's synod, in its official reaction to the June 20-26 Holy and Great Council, also said the meeting could not be called "pan-Orthodox" because four of the 14 independent Orthodox member churches did not attend.

The Moscow Patriarchate, which represents between half and two-thirds of the world's 300 million Orthodox, has been disputing the summit's pan-Orthodox character since announcing its boycott in early June. Officials at the council said Russia's Patriarch Kirill could not come to Crete because archconservatives in his ranks opposed it.

But the synod took a more positive approach by calling the session "an important event" and asking its theological commission to study the six documents the council approved and report back on its findings.

In the diplomatic way the Orthodox churches communicate with one another in public, these comments meant Moscow has not closed the door on further efforts to bring the churches closer together.

Unlike the Roman Catholic church led by a single pope, Orthodoxy is a loose network of sovereign -- the official word is "autocephalous" -- member churches organized along national lines, each with its own leader.

Ecumenical Patriarch Bartholomew, the spiritual leader of the Orthodox based in Istanbul (the former Constantinople), has no administrative authority over the members. He championed the idea of the council to bring church leaders together at the highest level for the first time in over 1,200 years.

The four absent churches -- Antioch, Bulgaria, Georgia and Russia -- stayed away because of disagreements with the documents drawn up for approval and a jurisdictional dispute between Antioch and Jerusalem.

Bartholomew insisted on going ahead with the council anyway because he felt the Orthodox churches, which had grown apart and somewhat isolated from one another during the turbulent 20th century, needed to revive their conciliar tradition and seek a more unified response to the challenges of the modern world.

"This sort of uneven evolution required a council to establish some fundamental guidelines for the Orthodox churches," the Rev. John Chryssavgis, council spokesman, told RNS after the summit.

No follow-up meeting was decided, but Romania offered to hold the next summit in seven years.

"There will no doubt be more opportunities for such councils," Chryssavgis said. "Hopefully these will not take as long to prepare and organize."

A proposal for Catholic-Orthodox eucharistic sharing during the pandemic