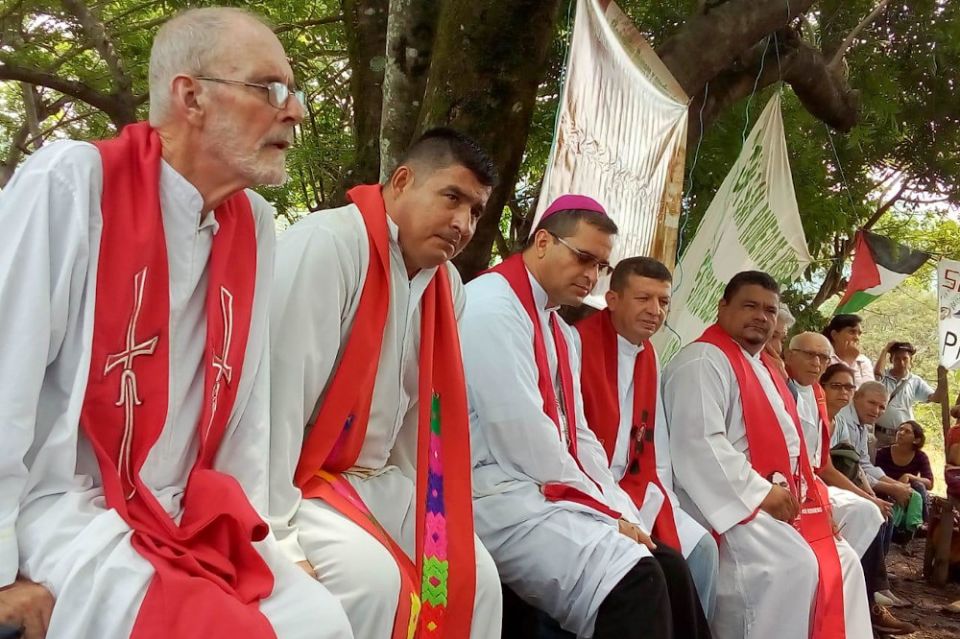 Chalatenango, El Salvador — If you look closely at the hand-stitched embroidery that hangs on the walls of the Museum of the Image and the Word in San Salvador, you can make out a stretched hand reaching out from under the water. Another smaller figure, presumably the figure of a child, is stitched with arms outstretched, floating in a river, as helicopters fly over them and over a group of peasants on the run.

Though there's not much said about the person who crafted it, it was made by a Salvadoran refugee in a camp in Honduras in the 1980s, where many residents from the region of Chalatenango, a department in northern El Salvador, were sent seeking refuge from the war. It depicts descriptions of accounts told by survivors of what has become known as the May 14, 1980, Sumpul River massacre.

In a remote area called Las Aradas, where the river straddles Honduras and El Salvador, more than 600 people were killed over a 12-hour period that day, after government forces from both countries and a paramilitary group on the Salvadoran side opened fire on an unarmed group they had surrounded.

Because some of them were active in workers' unions, unlawful at the time, they were believed to be subversives. However, many children like Julio Rivera, 8 years old at the time of the massacre, were just looking to survive.

"I left my hometown after my entire family, except my father, had been assassinated," he said in a January interview with Catholic News Service.

Most painful was the killing of his 13-year-old brother, accused of being a communist; then his mother was killed, followed by his other brothers.

"That's how my family ended, killed, tortured," he said. "And then they killed (St.) Oscar Romero."

The Salvadoran archbishop, canonized by the Catholic Church in 2018, also had been labeled a communist, a talking point to justify his assassination as he celebrated Mass March 24, 1980, just seven weeks before the mass killings at the Sumpul River. He had called on the government to stop what had by then become regular attacks and killings of unarmed civilians. 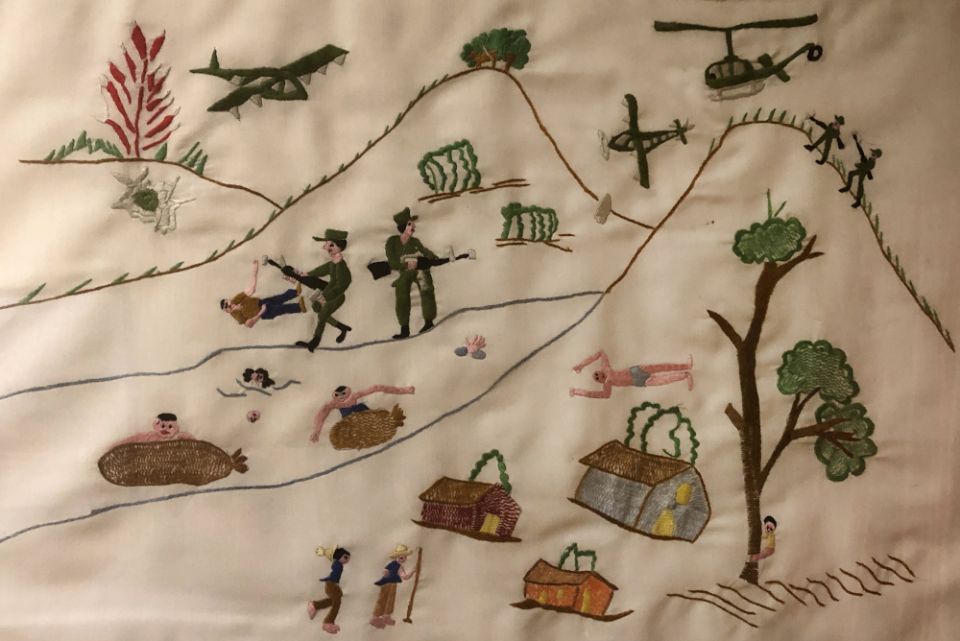 A framed piece of embroidery stitched by an unnamed Salvadoran refugee in a Honduran camp was part of an exhibit at the Museum of the Word and Image in San Salvador, El Salvador, in January. (CNS/Rhina Guidos)

When he died, it felt as if hope and protection had vanished for the poor, Rivera said. Running to the river after seeing armed soldiers enter his hometown of Las Vueltas seemed like a precaution. But at the river, he would be marked for life after witnessing the mass killing of children and adults drowning as they tried to cross the river toward the Honduran side, or being shot or sliced to death with bayonets, a scene he still cannot forget 40 years later.

Bishop Oswaldo Escobar Aguilar of Chalatenango, where more than 50 such mass killings took place, said what happened at the Sumpul River that day, like other assaults in the Department of Chalatenango, was a "crime against humanity."

"There's such a history of pain and suffering," he told Catholic News Service May 12, and what happened at the Sumpul River that day was just another instance in a long list of human rights violations in the region, and one in which the Honduran government participated.

Though the Salvadoran government has at the moment strict social distancing limits in place because of the coronavirus pandemic, he said he plans to celebrate Mass for the victims and survivors for the 40th anniversary of the massacre May 14 in an empty church in Arcatao, the hometown of many of the Sumpul River victims.

Forty years, biblically speaking, is a number full of meaning, the bishop said, referring to the 40 years the people of God in the Bible were tested only to be liberated, setting off toward the promised land.

"It's when the time of trial and testing should be ending and heading toward a better life in El Salvador," he said. "But impunity has prevented that."

"What I want people to know this year is that these victims still have not found justice."

Though the area where the massacre took place is remote, mountainous and rocky — it can take up to three hours to reach by foot — soldiers guarded it for days after the massacre, preventing anyone from entering, making it difficult for information or documentation about what happened to get out.

But as survivors started trickling into Honduras, seeking medical help for their injuries, church members heard from them what had taken place. On June 19, 1980, a little more than a month after the massacre, priests and women religious from the neighboring Honduran Diocese of Santa Rosa de Copan, including its bishop, made a public denunciation.

Two priests, including a Franciscan Capuchin from New York working in Honduras, Fr. Earl Gallagher, tended to surviving victims shortly after the incident. Gallagher, known there as "Padre Beto," told The New York Times he had visited the river on the Honduran side a day after the victims began trickling in, and he said, "there were so many vultures picking at the bodies in the water that it looked like a black carpet,'' according to a June 8, 1981, story in the newspaper.

Though both governments dismissed the denunciation as "lies" and "calumnies," it caught the attention of two journalists who briefly went into the area and were able to photograph scattered skulls and bones in parts of Las Aradas. Over the years, the government of El Salvador finally admitted that something had taken place there, though only saying the number of those killed was much lower than the 600 that church members have alleged.

"What I want people to know this year is that these victims still have not found justice," Escobar said. "And the state needs to ask for forgiveness and provide transitional justice and reparations for survivors. These crimes clamor for justice. The church is not doing this out of an ideological point of view, but because we follow the Gospel."

If you look at Genesis 4:10, he said, when Cain kills his brother Abel, God says to Cain: "What have you done? Your brother's blood cries out to me from the ground!"

Related: In the memory of horror and pain, Salvadorans overcome massacre with faith

Escobar, whose family also was forced to flee Chalatenango as a child, after a brother and a sister were killed, said that since he, too, has "suffered violence" and "repression," being with the victims, if only in spirit this year, is "being with the cry and the anguish of those who suffered at that time, whose only voice was that of Romero."

"This is a history that must not be repeated," he said.

Survivor Rivera said that some would like to see the memory of what happened that day to him and others at Sumpul River forgotten. But those who survived it will keep it alive, because it means bringing dignity to the innocent and defenseless who died that day.

"They were human beings, Salvadorans, our family, our loved ones," he said. "They weren't animals left behind in those hills. We feel the profound necessity of paying homage and providing them honor."

A survivors' group he belongs to once was asked what it was that they wanted from the perpetrators.

In the memory of horror and pain, Salvadorans overcome massacre with faith