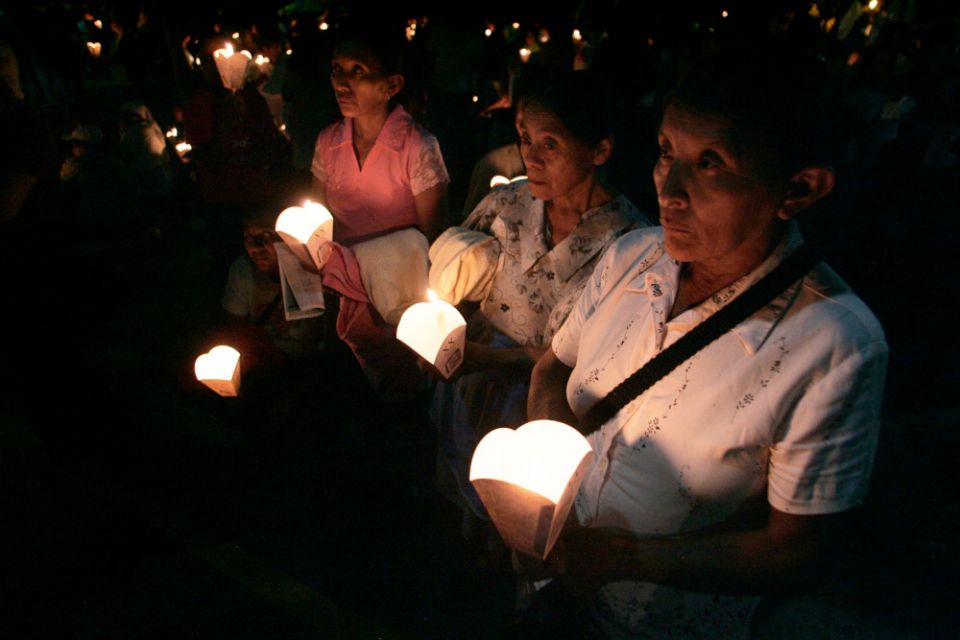 A file photo shows people gathering during a candlelight service in San Salvador to commemorate the 1989 killing of six Jesuits and two women during El Salvador's civil war. On Sept. 11, 2020, a Spanish court sentenced former Salvadoran Col. Inocente Orlando Montano to more than 133 years in prison for his involvement in the slaying of five of the Jesuits. (CNS/Reuters/Luis Galdamez)

The Jesuit-run Central American University in El Salvador welcomed the verdict of a Spanish court, which convicted a former Salvadoran colonel for the murder of five Jesuit priests in 1989.

The verdict was "an extraordinary service to the truth" from a conflict in which many atrocities have gone unpunished, the university statement said. It expressed some sadness, however, that justice had not occurred in El Salvador, where the slayings occurred during the country's civil war.

"Through the evidence and testimony given, the system of concealment and impunity overseen by the armed forces and the Salvadoran state [to a certain degree] has become clear, especially in the face of the human rights violations committed during the civil war," the university said in a Sept. 11 statement.

The trial, the statement continued, "clearly showed the armed forces ... operated as a criminal and cover-up machine."

The statement said the results of the trial in Spain would lead to "real steps in favor of truth and justice, not only in the so-called Jesuit case, but in all the [cases] related to serious human rights violations."

In a Sept. 11 ruling, former Col. Inocente Orlando Montano, 77, was found to have planned and ordered the murders of the five Jesuit priests — all Spanish nationals — Nov. 16, 1989, at their residence on the Central American University campus.

The court could only rule on the cases of the five Spanish Jesuits as a condition of Montano's 2017 extradition to Spain from the United States, where he resided prior to his extradition.

Montano, who appeared at his Madrid trial in a wheelchair, was sentenced to 133 years, four months and five days in prison — 26 years, eight months and one day for each murder. He had pleaded not guilty and testified to not having any animus against the Jesuits or the Catholic Church and even spoke of Ellacuria as a friend.

Witnesses at the trial — held over nine days in June and July — said Montano considered the Jesuits to be "traitors" and saw, along with others in the army, the Central American University as infested with rebels from the Farabundo Martí National Liberation Front.

Ellacuria was involved in a peace process to end the civil war, which prosecutors say was seen as a threat by the military command.

Yusshy Rene Mendoza, a former lieutenant and cooperating witness, testified that perceptions in the military were that Ellacuria supported the guerrilla cause. Mendoza also testified that the orders to kill Jesuits came from the "high command."

Almudena Bernabeu, the lead prosecutor, who pursued the case for 12 years, said 11 other figures were part of the military high command, while then-President Alfredo Cristiani "was actively protecting the soldiers and covering up evidence."

The Central American University expressed some disappointment that the trial had to occur in Spain, saying "for the families of the Jesuits, it has a subsidiary value" compared to achieving justice in El Salvador.

"The road to reparation passes through knowing the truth and the practice of justice and forgiveness," the statement continued. "The continuation of the judicial process in El Salvador, having already started, but maliciously stopped, to determine who were the intellectual authors of this horrendous crime is a debt of justice and must not wait any longer.