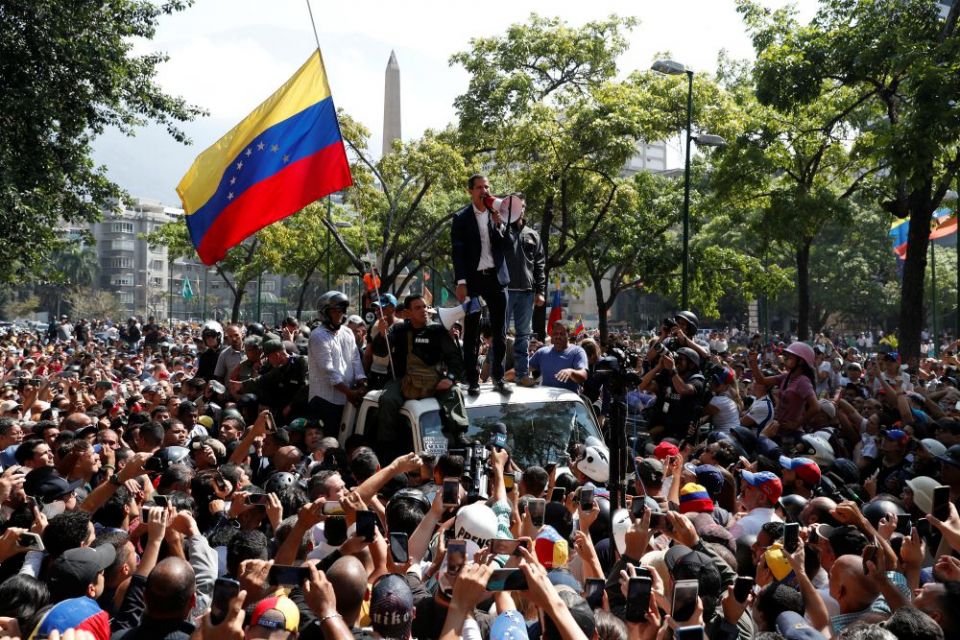 Venezuelan opposition leader Juan Guaidó talks to supporters during a protest near Carlota airbase in Caracas, Venezuela, April 30. Guaido took to the streets with activist Leopoldo Lopez and a small contingent of heavily armed soldiers in a call for the military to rise up and oust President Nicolás Maduro. (CNS/Reuters/Carlos Garcia Rawlins)

When the Trump administration announced in January it would back Juan Guaidó's claim as the rightful president of Venezuela, it instituted a series of harsh economic sanctions against the country's authoritarian leader Nicolás Maduro in hopes of overthrowing his regime.

When Guaidó's April 30 "military uprising" failed to amount to much, some analysts questioned what U.S. sanctions, the anti-Maduro strategy going back to 2017, were accomplishing. One report from a prominent think tank argued the results are nothing short of a worsening humanitarian crisis, evident in the form of 40,000 excess deaths researchers found in one year alone.

As the U.S. now considers next steps in its involvement in Venezuela's tense stand-off, economic sanctions once again seem to raise a tangle of ethical and moral as well as geo-political issues experts disagree about.

Are sanctions a tool to support global democracy, or a weapon to further expand U.S. power in Latin America? Are they an effective political strategy, or are they actually contributing to a devastating humanitarian crisis?

And, ultimately, what considerations should take priority?

"Sanctions and other powerful non-military actions should be subjected to scrupulous ethical scrutiny," Marie Dennis, co-president of Pax Christi International, told NCR via email. Although Pax Christi International, a Catholic non-governmental organization, does not have an official position on Venezuela, Dennis raised cautions about sanctions. "Although they themselves might not appear to be overtly violent, if they are seriously hurting people, including the very people they claim to support, such actions are in fact promoting structural violences like hunger and poverty and are therefore violent."

The report released in April by the Center for Economic and Policy Research, a Washington, D.C.-based think tank, argues U.S. sanctions are in fact harming the health and living conditions of Venezuela's civilian population.

Co-authored by prominent economists Mark Weisbrot and Jeffrey Sachs, the report claims "that most of the impact of these sanctions has not been on the government but on the civilian population," especially the "poorest and most vulnerable Venezuelans."

Titled "Economic Sanctions as Collective Punishment: The Case of Venezuela," it argues that U.S. economic sanctions imposed since 2017 contributed to 40,000 excess civilian deaths by preventing the Venezuelan government from paying for essential life-saving imports like food and medicine.

The report also contends that the sanctions are illegal under international law because they "fit the definition of collective punishment of the civilian population as described in both the Geneva and Hague international conventions, to which the US is a signatory."

Former United Nations rapporteur Alfred de Zayas made a similar assessment of U.S. sanctions back in January when he told the Independent, a publication in the United Kingdom, they are killing Venezuelans and could be considered "crimes against humanity" under international law.

Dr. Jorge Salazar-Carrillo, an economist at Florida International University who has studied Venezuela extensively, questioned the legitimacy and bias of the Collective Punishment report. He pointed to the continued abuses by Maduro, including overseeing the collapse of Venezuela's economy into "extreme poverty" and illegally corrupting his 2018 presidential election.

"It is clear that this is not something that just began to happen," Salazar said. "It's been happening now for six or seven years since the death of Chavez."

Salazar also pointed to the international support for Guaido from over 50 countries, including most of "the democratic world," as validation for U.S. sanctions against Maduro. Support for Maduro includes Russia, China, Cuba and Iran.

Weisbrot, the co-director at the Center for Economic and Policy Research and who has advocated for non-intervention in Venezuela in the past, told NCR that he believes human rights and democratic abuses are excuses the Trump administration is using to push out Maduro.

According to Weisbrot, Venezuela is the latest example of a left-of-center Latin American government in the 21st century — along with Brazil, Argentina and Paraguay — that the Trump administration has tried to push out with sanctions. He said that Cuba and Nicaragua are next on the list. 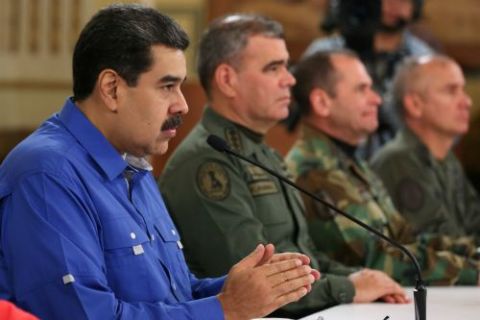 Venezuelan President Nicolás Maduro speaks during a broadcast with members of the government and military high command members at Miraflores Palace in Caracas April 30. Maduro claimed to have defeated what he called a military coup attempt by the opposition leader, Juan Guaidó. (CNS /Miraflores Palace handout via Reuters)

"This is just an attempt to take over Latin America in a way that they hadn't before the 21st century," he said.

Weisbrot said that, regardless of the administration's reasoning, economic sanctions are a "deadly form of warfare" and cannot be excused.

Weisbrot's report links sanctions imposed since January 2019 to a dramatic 36.5% drop in Venezuelan oil production, the government's primary source of foreign exchange revenue. According to the report, if this trend continues throughout the year it could amount to a $6.8 billion loss of foreign exchange earnings needed to pay for food and medicine.

Moreover, in recognizing Guaido as Venezuela's legitimate president, the report claims that the U.S. blocked the Venezuelan government from using a system of correspondent banks to pay for international transactions. "This included access to necessary credits for imports of medicine, food, and other essential goods," it states.

The report directly ties the economic consequences of the U.S. sanctions to widespread adverse health impacts. It cites a study that found 300,000 people at risk "because of lack of access to medicines or treatment," and another survey that reported a 31% increase in general mortality between 2017 and 2018, resulting in 40,000 excess deaths.

"This would be a large loss of civilian life even in an armed conflict, and it is virtually certain that the U.S. economic sanctions made a substantial contribution to these deaths," the report states.

In terms of the political effectiveness of the sanctions, Salazar said he believes they are working.

Referencing Maduro's loss of oil revenue and billions of dollars in debt to China and Russia, Salazar said, "He doesn't have a way out."

Despite calls from Guaido to change allegiances, the majority of Venezuela's military remains loyal to Maduro. Salazar said that the military is key to securing a regime change, however connections of high military officials to Colombian drug cartels is likely making many of them hesitant to shift loyalties.

This week, popular pressure in the form of large-scale protests led to bloodshed that killed four people and wounded more than 200. According to the Observatorio de Conflictos, 57 protestors have now been killed in 2019.

"A fundamental principle of Catholic social teaching is participation — the right of people to participate in important decisions that affect their lives," she said. "The people of Venezuela are engaged in an epic struggle for the future of their country, a decision that is theirs to make."

Actually determining what most Venezuelans want, however, is a difficult task. Dennis said that historically opposition against Chavez and Maduro came from the upper classes, and it is unclear if Guaido represents a broader constituency as he claims.

Weisbrot told NCR he thinks Guaido was chosen by the Trump administration because the interests of his party, "which only has 14 out of 167 seats in the National Assembly," most closely align with American interests.

"They've been chosen because they have the hardest line against any kind of negotiated solution," Weisbrot said. 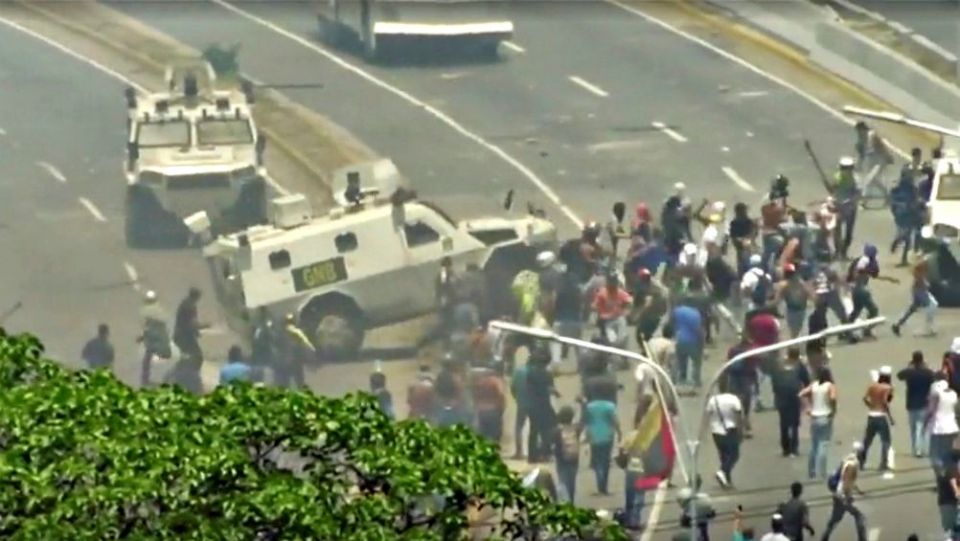 A Venezuelan National Guard vehicle plows into opposition demonstrators in Caracas in this still image taken from a video footage April 30. (CNS/Reuters TV)

Dennis added that if a humanitarian and human rights crisis in Venezuela requires external intervention, it should come from non-self-interested multilateral organizations like the United Nations.

"I do think the United States government is much too self-interested to be the power-broker in Venezuela," she said. "We depend on Venezuela for oil — it's a major factor."

On May 2, Vox reported that a group of anti-Maduro activists clashed with a group of anti-U.S. intervention protesters at the Venezuelan Embassy in Washington, D.C. The confrontation highlights an essential dilemma and difficult conversation.

If the Venezuelan people want intervention to oust an authoritarian dictator, should the U.S. then intervene on their behalf? However, if those interventions are disproportionately contributing to the suffering of vulnerable Venezuelans, is it possible to appropriately weigh those costs?

"I think it seems pretty clear that Maduro is being very deeply challenged by a lot of people in Venezuela and we need to try and respect the will of the people," Dennis said. "But there are no easy answers."