Syriac bishop for Canada says he will prioritize refugees, vocations 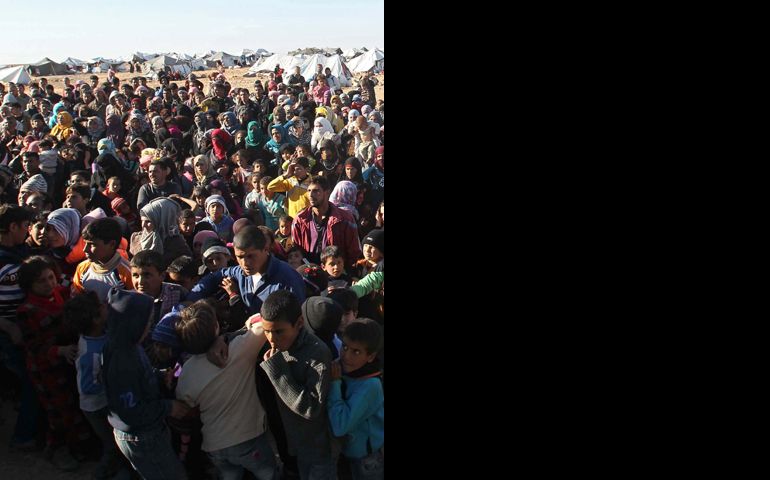 Beirut — The newly ordained bishop for the Syriac Catholic Church in Canada pledged to make his first priority the suffering and spiritual needs of beleaguered Syriacs seeking refuge in Canada.

Bishop Antoine Nassif was ordained Jan. 23 by Syriac Catholic Patriarch Ignace Joseph III Younan at Our Lady of Deliverance Cathedral in Beirut. He will lead the first apostolic exarchate for Syriac Catholics living in Canada, with the jurisdiction based in Montreal and Laval, Quebec.

The Canadian exarchate, similar to a diocese, covers territory there that was once part of the Newark, New Jersey-based Eparchy of Our Lady of Deliverance, established in 1995.

After his ordination, Nassif noted the new exarchate was erected in the year of mercy and at a time when God "is offering so much" to the Syriac church, most notably the beatification in August of Syriac Catholic Bishop Flavien Michel Melki, a century after he was beheaded for refusing to convert to Islam.

The new bishop added that the blood of the martyrs "didn't quench the thirst of their persecutors," alluding to the persecution facing Christians in Syria and Iraq as a result of Syria's civil war and the uprooting of Christians by the Islamic State group.

Days before his ordination, Nassif, who was born in Biakout, Lebanon, told Catholic News Service that he never imagined becoming bishop or going to Canada as shepherd to Syriac Catholics there.

"But I'm obeying. I'm ready to be where God sends me. This is the real call, to understand and to feel that in every step I can see God's hand guiding me," he said.

"With what is happening in our Middle East, and most importantly with the refugees -- Syrian, Iraqi and others -- I will put their suffering on the top of my priorities, especially their spiritual needs," he pledged.

With the establishment of the exarchy, more Syriac Catholic families from Syria and Iraq will be encouraged to migrate, he told CNS. Nassif said he met many Iraqi and Syrian refugees in Lebanon ahead of his ordination and added: "They live in very difficult situations."

The bishop said he plans to work closely with the Canadian government, particularly with Eva Nassif, a member of the Canadian Parliament, who is a native of Lebanon and a distant relative he has never met, to facilitate the settling of refugees.

"I have no doubt that all members of parliament, and the Canadian government itself, consider this issue among their priorities," he told CNS. "It is a purely humanitarian issue and deserves the participation and support of everyone."

He said his inspiration to become a priest was influenced by his maternal uncle, 85-year-old Bishop Antoine Beylouni, now retired, who concelebrated the ordination liturgy with the patriarch and Bishop Barnaba Yousif Habash of Our Lady of Deliverance in Newark.

Nassif told CNS that it was not his uncle's stature as bishop that inspired him, but his commitment to parish service and his closeness to parishioners.

"Maybe I inherited his love for the Syriac liturgy," he added.

Before the onslaught of the Islamic State, Syriac Catholics in Syria and Iraq were accustomed to being near to their church, both in proximity and as a source of constant spiritual support. But in Canada, the three existing parishes and two new missions are spread out. Most recent figures showed approximately 16,000 Syriac Catholics in Canada, before the current immigration there.

"Our people are used to having the church next door," Nassif told CNS.

"I have to keep this tradition," he said of the Syriac Catholic diaspora and refugees settling in Canada. "I want them to feel that, even in Canada, the church is a mother, a home for them. I'm willing to be next to the people, I want to be close to them. I'm going to encourage the priests to do the same."

He told CNS the new exarchate needs more priests, and he plans to use the same strategy to encourage vocations among Syriacs in Canada as when he was rector of the patriarchal seminary, by visiting parishes.

At the three-hour liturgy steeped in rituals, Nassif, vested and veiled in white, processed with the patriarch and bishops and took his seat under the crucifix behind the altar, where he remained, a symbol of Jesus' 40-day fast in the desert, until he was officially ordained.

As part of the ceremony, the patriarch and bishops, in descending order according to rank and tenure, together grasped the newly vested bishop's crosier, with Nassif's hand at its base. Each bishop then released his grip as the patriarch moved Nassif's hand up the crosier, then let go so he stood alone, holding it.

Nassif was lifted three times in his chair by five of the six Syriac Catholic priests serving in Canada and blessed the faithful for the first time as bishop. Amid applause, cheers and ululation from women, his mother, facing him in the front pew, wiped her tears.

Nassif's enthronement is scheduled for Feb. 27 in Montreal.