by Jonathan Luxmoore
World
This article appears in the War in Ukraine feature series. View the full series. 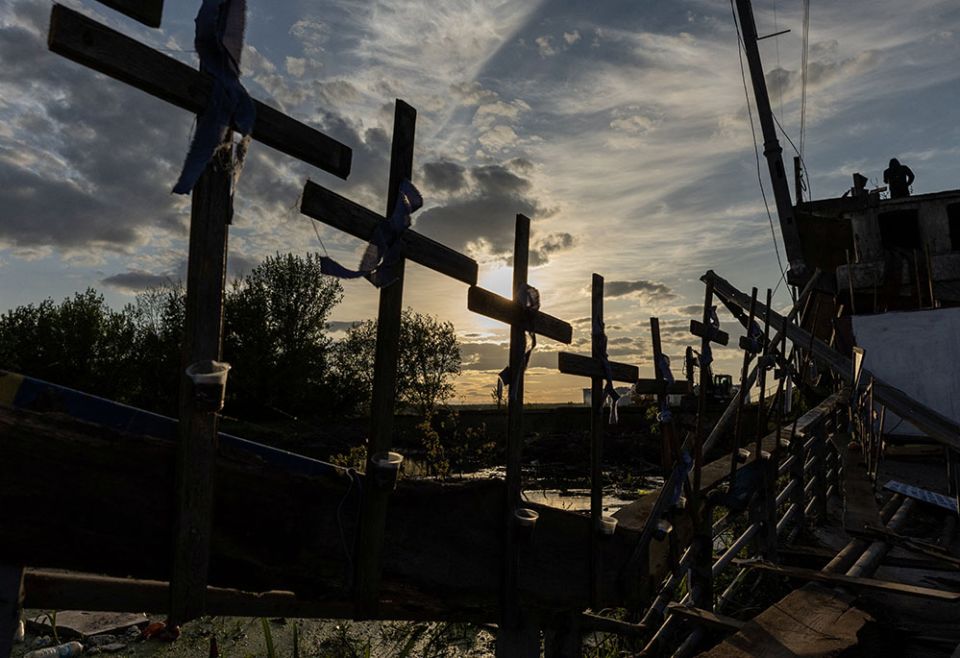 Crosses are attached to the destroyed bridge in Irpin, Ukraine, May 16, during Russia's invasion of Ukraine. (CNS/Reuters/Jorge Silva)

Warsaw, Poland — When a group of Polish archbishops paid a "solidarity visit" to Ukraine in late May, they deplored the cruelty and destruction being meted out against its people, and criticized oversimplified hopes of dialogue and mediation with Russia.

But their presence also highlighted a neglected feature of the current drama — the key role played by Polish Catholic clergy in sustaining Ukrainian religious life.

"Everyone who wished to return home had an opportunity to do so, but Polish priests and nuns have remained here, dispensing sacraments and providing spiritual succor — even when they've left temporarily, it's been to arrange help for refugees and people displaced by the fighting," explained Bishop Jan Sobilo, an auxiliary with Ukraine's eastern Kharkiv-Zaporizhzhia Diocese.

"Besides bringing humanitarian aid with them, the [Polish clergy] offered us all a reminder that we're not alone — that neighboring Christians are with us and the whole church supporting us at this difficult time," said Sobilo.

The auxiliary bishop, himself Polish-born and in office since 2010, spoke in the wake of the tour by the Polish church delegation, which was headed by Archbishop Stanislaw Gadecki, the Polish bishops' president. The delegation visited Lviv and Kyiv, as well as the town of Bucha, the site of a Russian massacre of Ukrainian civilians.

Sobilo told NCR that pastoral work had become impossible as Russian forces tightened control over captured territories, with clergy from NATO and European Union member states fearing they could be branded spies and infiltrators. 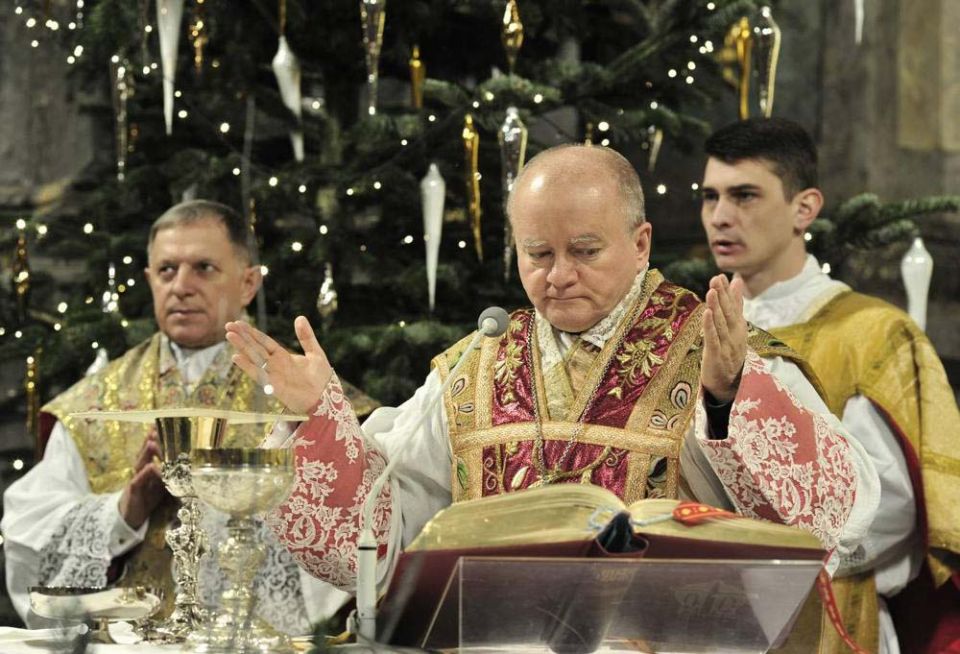 Against this background, the Polish visit had gained a special resonance, Sobilo said, given neighboring Poland's own experiences of war and occupation.

Meanwhile, another Polish priest agreed that the tour, combining "prayer and concrete help," had brought spiritual comfort for hard-pressed clergy on the ground.

"Polish priests and nuns make up half of all Catholic clergy in some Ukrainian dioceses and are very well accepted — over 15 years here, I've never heard complaints or experienced antagonisms," said Fr. Wojciech Pasiewicz, a director of Ukraine's Catholic Caritas-Spes organization, which is feeding more than 2,000 people daily in the largely Russian-speaking city of Kharkiv, mostly using Polish-supplied aid.

"Many lay Catholics have fled, leaving huge gaps and often desperate needs," said the priest. "All clergy are now performing both spiritual and humanitarian tasks, often in the most dangerous places. Their presence is really important for those in the most dire circumstances." 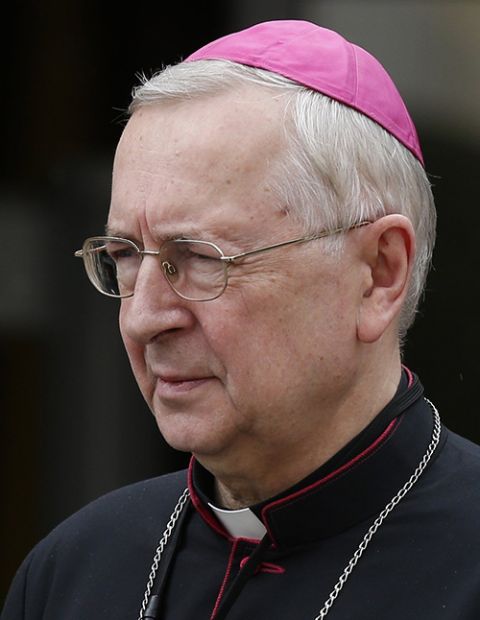 Speaking later, Gadecki pledged the church would always "stand on the side of the weakest" in a "war between David and Goliath," and stressed that the conflict wasn't "just a Ukrainian concern, but one for Poland and the whole of Europe."

With half a million troops now facing each other along a 1,900-mile front, making this the world's biggest armed conflict since World War II, Gadecki also voiced confidence in Ukraine's eventual victory, and predicted Ukrainians and Poles could "create something great together."

"There's clearly a great fear that the democracy that has taken root in Ukraine could spread within the Russian Federation and blow it up from within — something Russia's rulers can't allow," Gadecki told Poland's Catholic Information Agency, KAI.

Priests and nuns from Poland are a major presence in the seven dioceses making up Ukraine's Latin-rite Roman Catholic Church, while virtually all Ukrainian-born clergy are ethnically Polish, speak Polish as a second language or received their training in Poland.

Connections date from when western Ukraine formed part of Poland before World War II. But they continued under Soviet rule as well, when Poland's relatively free Catholics provided lifeline support for the underground church.

Polish clergy, often from religious orders such as the Franciscans and Dominicans, volunteered to minister in Ukraine after its December 1991 independence to make up for a post-communist lack of native clergy.

Today, four of the church's 14 bishops are Polish-born, including the bishops' conference president, Archbishop Mieczyslaw Mokrzycki of Lviv, who was a secretary to Popes John Paul II and Benedict XVI from 1996 to 2007, and Bishop Jacek Pyl, who heads the church in Russian-occupied Crimea.

And with most Polish clergy choosing to stay when Russia's brutal Feb. 24 invasion was heralded by missile strikes and artillery barrages, stories of heroism and self-sacrifice are widespread. 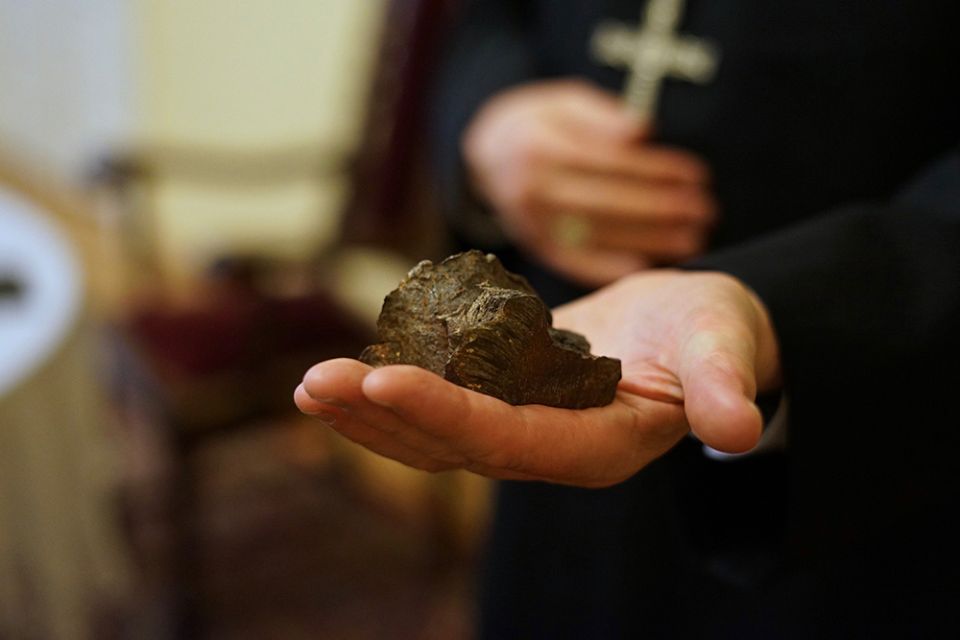 Archbishop Stanislaw Budzik of Lublin, Poland, is seen in his office April 22, holding what he said is a piece of the bomb that struck the roof of the chancery of the Diocese of Kharkiv-Zaporizhia, Ukraine, March 1. (CNS/Adrian Kowalewski)

A Polish Salesian working in Odessa, Sr. Anna Zajaczkowska, told Poland's KAI agency how she and others had packed emergency provisions and taped their convent windows to prevent injury from flying glass when Russian shelling began, while Pauline priests from Mariupol's Lady of Czestochowa parish related their perilous escape from the besieged city, leaving their order's house to be commandeered as headquarters by Russian-backed separatists.

A Sacred Heart priest from Lubien Kujawski in central Poland, Fr. Tadeusz Wolos, told Vatican News how his parishioners in Kyiv's Irpen suburb had buried family members in gardens and backyards when the Russians attacked, while taking steps to protect their newly completed Catholic church, dedicated to St. Thérèse of Lisieux.

His latest, on May 29, related how he had accompanied Dominican priests back to Kharkiv, just 25 miles from the Russian border, on the day eight city-dwellers, including a small baby, were killed by Russian shelling. The Dominicans found families cowering in church basements, including one whose home was destroyed when a Russian jet crashed into it.

Many Polish clergy have set up special bank accounts for emergency donations in collaboration with colleagues in Poland, which remains the first destination for Ukrainian refugees, with many finding shelter in Catholic parishes, convents and monasteries.

To date, the country has taken in more than 3.5 million Ukrainians of all faiths and backgrounds, in addition to the 2 million already in Poland before the war.

Gdansk-born Bishop Radoslaw Zmitrowicz, an auxiliary with Ukraine's western Kamianets-Podilskyi diocese, sent one of many appeals for help on May 19.

"While there are many displaced people here, rocket fire periodically also kills people and destroys infrastructure, as more and more funerals take place and wounded soldiers return for treatment and rehabilitation, amid separated families and rising uncertainties," the Polish bishop wrote.

With Poland now acting as a key supporter and advocate for Ukraine on the international stage, and demanding a tough stance toward Russia from NATO and the EU, Pasiewicz, the Lublin-born Caritas-Spes director, thinks feelings of gratitude and appreciation will transform ties between the two countries.

"When people ask why Poles are doing so much, I reply that we've also known persecution and poverty during our history, and have experienced the horrors of war ourselves in living memory," the Polish priest told NCR.

"But I think the wish to help is a national characteristic anyway," he said. "Where there's suffering, hardship and pain, people unite in a determination to act."

He hopes the bonds forged during the war will help settle some still simmering feuds between Ukrainians and Poles, who have both inflicted misdeeds and cruelties on each other over the centuries of their shared history.

"Having been occupied and controlled by Moscow for so many years itself, Poland certainly understands the current dangers — and this is impelling our bishops and priests to show solidarity and closeness with Ukraine," Sobilo told NCR.

In an open letter to Polish church leaders after their May visit, Shevchuk paid tribute to the "spiritual and moral support" being shown for Ukrainians as they defended "their sovereignty, independence, territorial integrity and right to self-determination." He invited the Polish bishops to attend his church's June synod plenary as an expression of their "great bond of brotherhood."

A version of this story appeared in the June 24-July 7, 2022 print issue under the headline: Polish clergy play key role in responding to war .