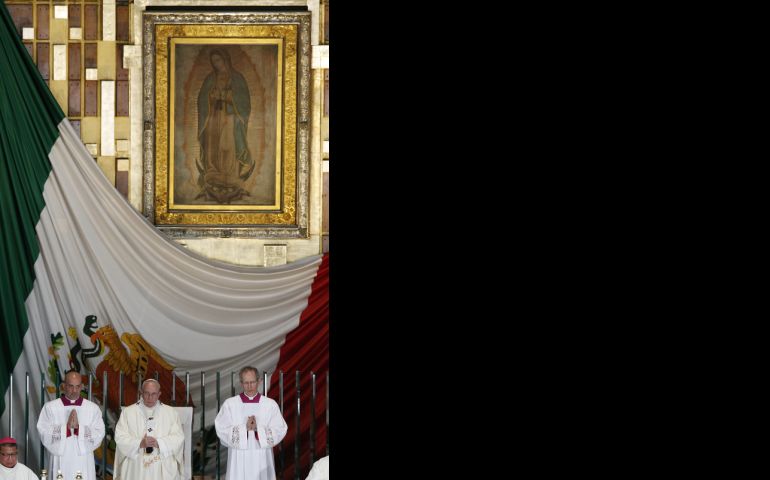 Pope Francis celebrates Mass in the Basilica of Our Lady of Guadalupe in Mexico City Feb. 13 (CNS photo/Paul Haring)
This article appears in the Francis in Mexico feature series. View the full series.

Mexico City — About 22 hours into his six-day trip to Mexico, Pope Francis finally got to do what he said he's wanted to for years: Come see and venerate the famous image of Our Lady of Guadalupe, known throughout the world.

In his third public event during the six-city visit to the country, the pontiff celebrated a Mass at the Basilica that houses the cloak that displays the image in an atmosphere of joy and celebration.

Thousands were gathered inside the Basilica for the Mass, while tens of thousands gathered outside, screaming and waving at Francis as he passed in his popemobile.

Crowds were lining streets for the entire 10-mile path to the Basilica from the city's apostolic nunciature, with some standing rows deep in spots along the way.

Francis has mentioned his desire to see the image many times throughout his papacy, even saying that he could not plan a trip to Mexico that did not include a stop at the Basilica.

In his remarks to Mexican President Enrique Peña Nieto during their formal meeting Saturday morning, the pontiff said he had come to Mexico as a "missionary of mercy and peace" but also "as a son who wishes to pay homage to his mother, the Blessed Virgin of Guadalupe, and place himself under her watchful care."

In his homily at the Mass, the pontiff said that just as Mary and her image had appeared to an indigenous Mexican man centuries ago, she "continues to accompany the development of this blessed Mexican land."

The Guadalupe image shows Mary in a blue cloak decorated with stars and surrounded by brilliant yellow light. It is said to have been given to a man named Juan Diego in the year 1531.

Juan Diego said Mary had appeared to him four times, asking him to build a church on the hill where the Basilica is now located.

The bishop of the time would not agree to the church's construction, so Mary had Juan Diego gather flowers into his cloak to give to the bishop. When the indigenous man unfurled his cloak to give over the flowers, the image was revealed.

"On that morning, Juan experienced in his own life what hope is, what the mercy of God is. He was chosen to oversee, care for, protect and promote the building of this Shrine," said Francis in his homily.

"On many occasions he said to Our Lady that he was not the right person; on the contrary, if she wished the work to progress, she should choose others, since he was not learned or literate and did not belong to the group who could make it a reality," the pope continued.

"Mary, who was persistent -- with that persistence born from the Father’s merciful heart -- said to him: he would be her ambassador," said the pontiff.

Francis said the story has a simple message for all to hear.

"We are all necessary, especially those who normally do not count because they are not 'up to the task' or 'they do not have the necessary funds' to build all these things," said the pope.

"In her and with her, God has made himself our brother and companion along the journey; he carries our crosses with us so as not to leave us overwhelmed by our sufferings," said Francis.

Mary wants us to represent her on Earth by caring for others, the pope said.

"Be my ambassador, she says to us, giving food to the hungry, drink to those who thirst, a refuge to those in need, clothe the naked and visit the sick," said Francis. "Come to the aid of your neighbor, forgive whoever has offended you, console the grieving, be patient with others, and above all beseech and pray to God."

After concluding his homily, the pontiff spent about four minutes of prayer from a distance in front of the image he had wanted so long to see. Following the Mass, he was led into a private room directly in front of the image, were he stayed in prayer for more than 25 minutes.

As the pope prayed after the Mass, the bishops attending the celebration stood behind him watching. People inside and outside of the Basilica kept silence in honor of the moment.

Francis is visiting Mexico through Wednesday. He continues his visit Sunday by traveling about 20 miles north of Mexico City to the small city of Ecatepec, where he will celebrate a public Mass before heading back to the capital for a visit to a pediatric hospital.

World | Under image of Our Lady of Guadalupe, Francis calls for caring church