US Catholic health care is a treasure 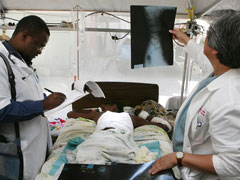 Dr. Edgar A. Gamboa, right, a trauma specialist from Scripps Mercy Hospital in San Diego, works with Haitian Dr. Theony Deshommes at St. Francis de Sales Hospital in Port-au-Prince, Haiti, in January 2010, after the earthquake destroyed most of the center's facilities. (CNS/Bob Roller)

The American Catholic bishops appear to have a grudge against Catholic health care.

In December, the bishop of Phoenix pronounced St. Joseph’s Hospital and Medical Center no longer Catholic. Earlier he declared the sister of Mercy who was responsible for assuring the hospital fulfilled its Catholic mission had automatically been excommunicated because she participated in a decision to permit removal of the placenta from a pregnant patient dying of pulmonary hypertension.

The bishop of Baker, Ore., withdrew Catholic endorsement of St. Charles Medical Center in Bend for not adhering to the church’s “Ethical and Religious Directives for Catholic Health Care Services.” The U.S. Conference of Catholic Bishops has been sparring with the Catholic Health Association of the United States over the latter’s support for health care reform legislation that the bishops feel contains insufficient restrictions on abortion.

Yet Jesus’ mission was to preach, teach and heal, and Catholic hospitals exemplify the best in Christian ministry. Most were founded by religious orders of women, many during the years when the United States was a missionary land. These women took risks, endured hardships, and by their courage and example won over skeptics and adversaries in the cities of the East and the towns of the frontier. Nowadays there are many fewer sisters, but their legacy endures in the 600 Catholic hospitals throughout the country. One-sixth of all patients admitted to a hospital in the U.S. are admitted to a Catholic institution.

I practiced pulmonary medicine for 33 years at Scripps Mercy Hospital in San Diego, a sister hospital to St. Joseph’s in Phoenix. Most of the physicians, nurses and hospital employees at Scripps Mercy are not Catholic, but they know the atmosphere at Mercy is different because of the sisters. Though each patient unit no longer has nuns as floor nurses or supervisors, staff treat one another with respect. And they treat patients with respect. That is why nurses and doctors choose to work or practice there, even if they don’t agree with Catholic theology. Administrators and executives are now laypersons as well, but the traditions from the sisters and awareness of the spiritual dimension of care endure, support and guide.

At Scripps Mercy, the Mission Integration Committee is charged with assuring that hospital policies and attitudes reflect the mission of the sisters. Major capital decisions undergo review to be sure they are consistent with the mission before they are funded. The Biomedical Ethics Committee was established in 1983 and remains a strong influence on staff attitudes. Mercy Hospital was one of the first in San Diego to have a full-time chaplaincy service and is a model for ministering to people of all faiths and backgrounds.

Millions of dollars every year go to charitable projects, such as the Mercy Clinic for care of the indigent and the Mercy Outreach Surgical Team to help the poor of Mexico. Mercy’s doors are open to all the sick homeless and dispossessed of San Diego, with ability to pay not a criterion for receiving care. Hospital management has learned how to give high-quality care yet remain financially solvent despite aggressive health plans and underfunded government programs. This is Jesus’ message applied pragmatically in a pluralistic, secular society.

In addition, the Mercy philosophy influences Scripps Health, the regional nonprofit system that, along with Catholic Healthcare West, owns the hospital. Scripps leaders have expressed respect and appreciation for the “soul” brought to Scripps when Mercy merged into the organization in 1995.

Church leaders would be expected to proclaim proudly the benefits to society from the efforts of the missionary sisters. Yet Phoenix Bishop Thomas Olmsted focused on accusing St. Joseph’s of performing an abortion. The Arizona Republic quoted him saying hospital executives had not “addressed in an adequate manner the scandal caused by the abortion.” But what about the scandal of the hierarchy trying to intimidate hospital staff for decisions made when confronted with a terrible medical dilemma?

The church has enemies who would like to see Catholic hospitals forced to offer abortions or be sold to those who will. By drawing the line of authority on the most complicated of medical-moral cases imaginable, the bishop gives ammunition to those who want to claim that women aren’t completely safe in a Catholic hospital.

Pro-life advocates often don’t see that the same legal conscience clauses that permit Catholic hospital staffs not to perform abortions or sterilizations also permit individual staff members to do these procedures elsewhere. Pro-life groups once picketed Scripps Mercy Hospital because members of the medical staff dispense contraceptives and perform sterilizations in their own offices or at other hospitals. They forgot the San Diego Pro-Life League had its beginning at Mercy Hospital in the early 1970s, several years before Roe v. Wade reached the U.S. Supreme Court.

Patients pick hospitals based on where they live, on reputation for special skills, or where their health plans allow, not on whether the hospitals adhere to the ethical and religious directives of the bishops’ conference. It may be too soon to be sure, but spokespersons for St. Joseph’s of Phoenix and St. Charles of Bend claim they have not seen any change in admission rates or community support since being de-Catholicized by their bishops.

The bishops can best help the pro-life cause by supporting Catholic hospitals. In addition, with priestly sexual abuse still in the spotlight, condemning St. Joseph’s, St. Charles and the Catholic Health Association for their decisions in difficult medical-moral dilemmas looks hypocritical to the public.

In summary, Catholic hospitals are a treasure to their communities and to the church. They and the sisters who remain active in health care ministry deserve praise, support and gratitude from the rest of us for the good they do.

[Dr. Kevin P. Glynn is a physician who lives in La Jolla, Calif.]

World | US Catholic health care is a treasure