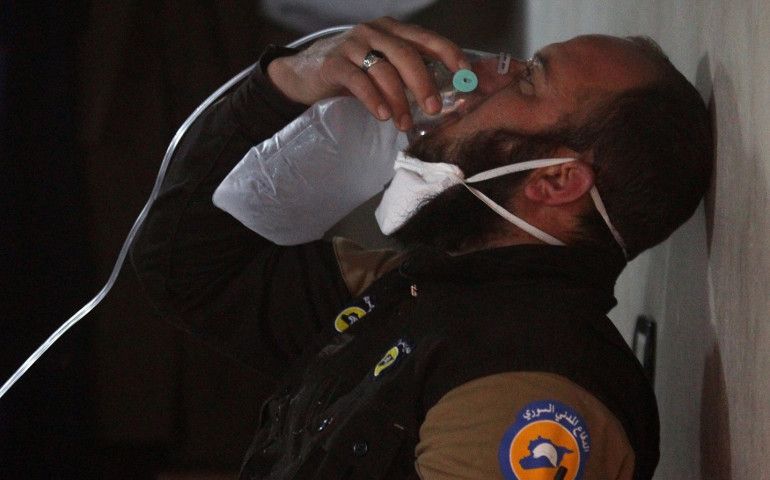 A civil defence member breathes through an oxygen mask, after what rescue workers described as a suspected gas attack in the town of Khan Sheikhoun in rebel-held Idlib, Syria April 4. (REUTERS/Ammar Abdullah)

Moscow — Russia denied on Wednesday that Syrian President Bashar al-Assad was to blame for a poison gas attack and said it would continue to back him, setting the Kremlin on course for its biggest diplomatic collision yet with Donald Trump's White House.

Western countries, including the United States, blamed Assad's armed forces for the worst chemical attack in Syria for more than four years, which choked scores of people to death in the town of Khan Sheikhoun in a rebel-held area on April 4.

Washington said it believed the deaths were caused by sarin nerve gas dropped by Syrian aircraft. But Moscow offered an alternative explanation that would shield Assad: that the poison gas belonged to rebels and had leaked from an insurgent weapons depot hit by Syrian bombs.

Two U.S. officials, speaking on condition of anonymity, rejected Russia's account: "That strains credulity," said one. "Russian assertions do not comport with reality."

The United States, Britain and France have proposed a draft U.N. Security Council resolution that would pin the blame on Damascus. But the Russian Foreign Ministry called the resolution "unacceptable" and said it was based on "fake information."

Kremlin spokesman Dmitry Peskov said Russia would take its case blaming the rebels for the poisoning to the United Nations.

Video uploaded to social media showed civilians sprawled on the ground, some in convulsions, others lifeless. Rescue workers hose down the limp bodies of small children, trying to wash away chemicals. People wail and pound on the chests of victims.

Turkish President Tayyip Erdogan said the attack had killed more than 100 people. That death toll could not be independently confirmed.

Hasan Haj Ali, commander of the Free Idlib Army rebel group, called the Russian statement blaming the rebels a "lie" and said rebels did not have the capability to produce nerve gas.

"Everyone saw the plane while it was bombing with gas," he told Reuters from northwestern Syria. "Likewise, all the civilians in the area know that there are no military positions there, or places for the manufacture (of weapons)."

The incident is the first time Washington has accused Assad of using sarin since 2013, when hundreds of people died in an attack on a Damascus suburb. At that time, Washington said Assad had crossed a "red line" set by then-President Barack Obama.

Obama threatened an air campaign to topple Assad but called it off at the last minute after the Syrian leader agreed to give up his chemical arsenal under a deal brokered by Moscow, a decision which Trump has long said proved Obama's weakness.

The new incident means Trump is faced with same dilemma that faced his predecessor: whether to openly challenge Moscow and risk deep involvement in a Middle East war by seeking to punish Assad for using banned weapons, or compromise and accept the Syrian leader remaining in power at the risk of looking weak.

Trump described the April 4 incident as "heinous actions by the Bashar al-Assad regime", but also faulted Obama for having failed to enforce the red line four years ago. Obama's spokesman declined to comment.

The draft U.N. Security Council statement condemns the attack and demands an investigation. Russia has the power to veto it, which it has done to block all previous resolutions that would harm Assad, most recently in February.

France's foreign minister said the chemical attack showed Assad was testing whether the new U.S. administration would stand by Obama-era demands that he be removed from power.

"It's a test. That's why France repeats the messages, notably to the Americans, to clarify their position," Jean-Marc Ayrault told RTL radio. "I told them that we need clarity. What's your position?"

Trump's response to a diplomatic confrontation with Moscow will be closely watched at home because of accusations by his political opponents that he is too supportive of Russian President Vladimir Putin.

He has previously said the United States and Russia should work more closely in Syria to fight against Islamic State.

The chemical attack in Idlib province, one of the last major strongholds of rebels that have fought since 2011 to topple Assad, complicates diplomatic efforts to end a war that has killed hundreds of thousands of people and driven half of Syrians from their homes.

Over the past several months Western countries, including the United States, had been quietly dropping their demands that Assad leave power in any deal to end the war, accepting that the rebels no longer had the capability to topple him by force.

The use of banned chemical weapons would make it harder for the international community to sign off on any peace deal that does not remove him.

British Foreign Secretary Boris Johnson, who two months ago shifted his country's policy by saying Assad could be allowed to run for re-election, said on April 5 that he must go.

"This is a barbaric regime that has made it impossible for us to imagine them continuing to be an authority over the people of Syria after this conflict is over."

Cabinet members get together for weekly Bible study