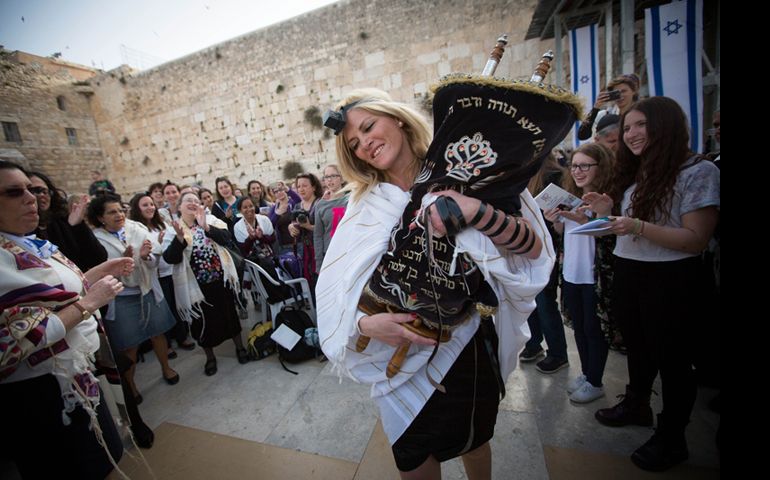 Women of the Wall, who retrieved a Torah scroll from the men’s prayer section despite regulations against women reading from a Torah at the Western Wall, celebrate during their monthly prayer service at the wall. (Miriam Alster/Flash 90)

Jerusalem — American Jews are celebrating an Israeli government decision to greatly expand -- and fund -- a pluralistic egalitarian prayer section adjacent to the Western Wall plaza as a first step toward official Israeli recognition of non-Orthodox streams of Judaism.

The Western Wall, the holiest site in Judaism after the Temple Mount, is a remnant of the second Jewish Temple, which was destroyed by the Romans in the year 66.

The Cabinet decision on Jan. 31 will lead to the creation of Israel’s first official prayer site for Jews who wish to pray in mixed-gender groups, and for women who want to read from a Torah scroll.

“The new space is a dramatic, unprecedented and critical acknowledgement by the State of Israel that Judaism’s holiest site -- the Kotel -- should incorporate the traditions of the Masorti [Conservative] and Reform streams in which men and women pray together,” the Reform and Conservative movements and the Jewish Federations of North America said in a joint statement.

Although much work regarding the implementation of this decision still remains, the joint statement added, “We are measurably closer today to the ultimate symbol of that reality -- one wall for one people.”

The mixed-gender space was spearheaded by Prime Minister Benjamin Netanyahu at the urging of non-Orthodox U.S. Jews and the feminist prayer group Women of the Wall.

Israel’s strictly Orthodox establishment has marginalized both groups. The government does not recognize the authority of Reform and Conservative rabbis and institutions and provides them with only nominal funding.

Sunday’s decision concludes two years of negotiations between the Israeli government, representatives of the Jewish Federations of North American, the Reform and Conservative movements in the U.S. and Israel and Women of the Wall.

Under the agreement, the government and quasi-governmental Jewish Agency will provide most of the $8.8 million budget over a two-year period. The enlarged prayer space, which the Conservative movement has maintained without government funding for 15 years, will be jointly governed by a new body that will include Women of the Wall and the Conservative and Reform movements and will be led by the Jewish Agency’s chairman.

The deal was necessary, all parties say, because the ultra-Orthodox religious authorities who oversee the main, northern section of the Western Wall compound refuse all but the strictest interpretation of Jewish law.

Over the years, the authorities have called on the police to detain and even arrest members of Women of the Wall who entered the women’s section wearing prayer shawls and tefillin [phylacteries] or attempted to smuggle in a Torah.

Liberal Jews, whose prayer is egalitarian, also find the religious atmosphere, as well as gender-segregated prayer sections, at the wall inhospitable. Ultra-Orthodox Jews have thrown rocks and plastic chairs at liberal worshippers.

Shmuel Rabinowitz, the ultra-Orthodox rabbi of the Western Wall, said in a statement that the decision left him with “a heavy heart” but that he feels relieved that the Women of the Wall group has agreed to pray in the new area.

“Ever since the fringe and vociferous group of Women of the Wall started its mass-media activity,” the wall “went from being a unifying site to one of incessant quarrels,” he said.

Rabinowitz did not address reports that some of the group’s members have vowed to continue praying at the wall even after the egalitarian space is completed.

Jerry Silverman, president and CEO of the Jewish Federations of North America, said the plan required compromise “all along the way,” from all sides, “but at the end of the day we agreed. The fact that nobody is fully satisfied means everybody was listening.”

Rabbi Julie Schonfeld, the U.S.-based executive vice president of the Conservative movement’s Rabbinical Assembly, called the decision “a very important step,” especially because “there has been no previous acknowledgment of egalitarian Judaism by the Israeli government.”

Schonfeld said that although the $8.8 million government allocation for pluralistic prayer is welcome, it is a fraction of the funding allocated to the wall’s administration.

“We continue to seek equal funding,” she said.

The movement will also continue its legal battles to obtain equal salaries for the movement’s rabbis, buildings and educational programs, she added.

While the new prayer space is a partnership between religiously liberal Jews and the government, Schonfeld said, “we don’t view this as something the government is doing for the Diaspora. This is something we are doing for Israel, to help build a vibrant democratic state.”