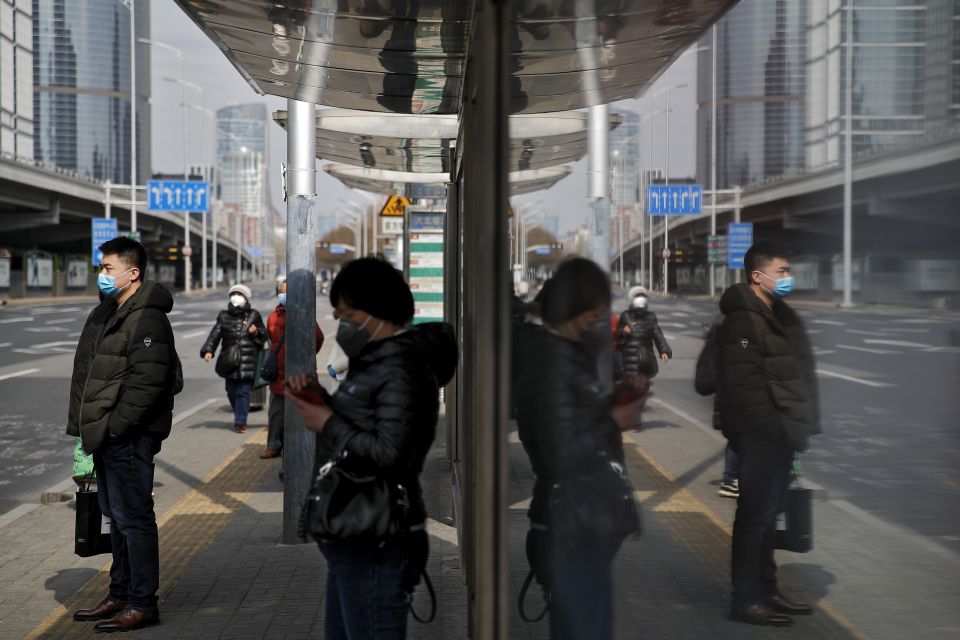 Commuters wearing protective face masks wait for buses at a stop in the Central Business District in Beijing, Monday, March 2, 2020. China's manufacturing plunged in February as anti-virus controls shut down much of the world's second-largest economy, but companies are confident activity will revive following government stimulus efforts, according to two surveys. (AP/Andy Wong)

Seoul, South Korea — The number of new virus infections rose worldwide along with fears of a weakening global economy, even as cases in China dropped to their lowest level in six weeks on Mar. 2 and hundreds of patients at the outbreak's epicenter were released from hospitals.

The number of deaths worldwide from COVID-19 topped 3,000 with expanding clusters of infections in South Korea, Italy and Iran. The virus was reshaping routines around Europe and across the Atlantic in the United States. The Organization for Economic Cooperation and Development warned that the world economy risked contracting this quarter for the first time since the international financial crisis more than a decade ago.

Major cities including Jakarta, New York, Moscow and Berlin grappled with their first recorded cases, and health officials in Washington state confirmed a second death there — a man in his 70s from a nursing facility near Seattle, in a region where researchers believe the virus may have been circulating for weeks undetected.

Schools emptied across Japan, mobile hospitals were planned in Iran, and the Mona Lisa, accustomed to droves of staring tourists, hung in a vacant room of the shuttered Louvre in Paris.

"Just about everywhere, the cases are rising quite quickly in a number of countries," said Ian Mackey, who studies viruses at the University of Queensland in Australia.

Malaysia and Portugal were the newest places to detect the virus. More than 60 countries around the world — including nine of the 10 most populous— have found infections, with a global count of nearly 89,000 people affected by the illness. In the United States, cases ticked upward. Even as alarms grew louder in much of the world, Mar. 2 brought positive signs from China, where the outbreak started.

China's economy delivered hopeful cues, with mainland Chinese stock benchmarks charging back 3% and data showing progress in restoring factory output after weeks of disruptions related to the outbreak. But gains in European stock markets were wiped out Mar. 2 after the OECD warning.

China reported 202 new cases of the virus, its lowest daily count since Jan. 21, and the stricken heart of the health crisis, Wuhan, said 2,570 patients were released. At the largest of 16 temporary hospitals that were hastily built in Wuhan in response to the outbreak, worries over the availability of supplies and protective gear abated and pressure on medical staff eased.

Dr. Zhang Junjian, who leads a temporary hospital at an exhibition center in Wuhan which has a staff of 1,260, said optimism was high that the facility would no longer be needed in the coming weeks.

"If nothing special happens, I expect the operation of our makeshift hospital ... could complete its historical mission by the end of March," Zhang said.

China's sunnier news came two months into its outbreak. In the places the virus has spread more recently, the problems continued to magnify. 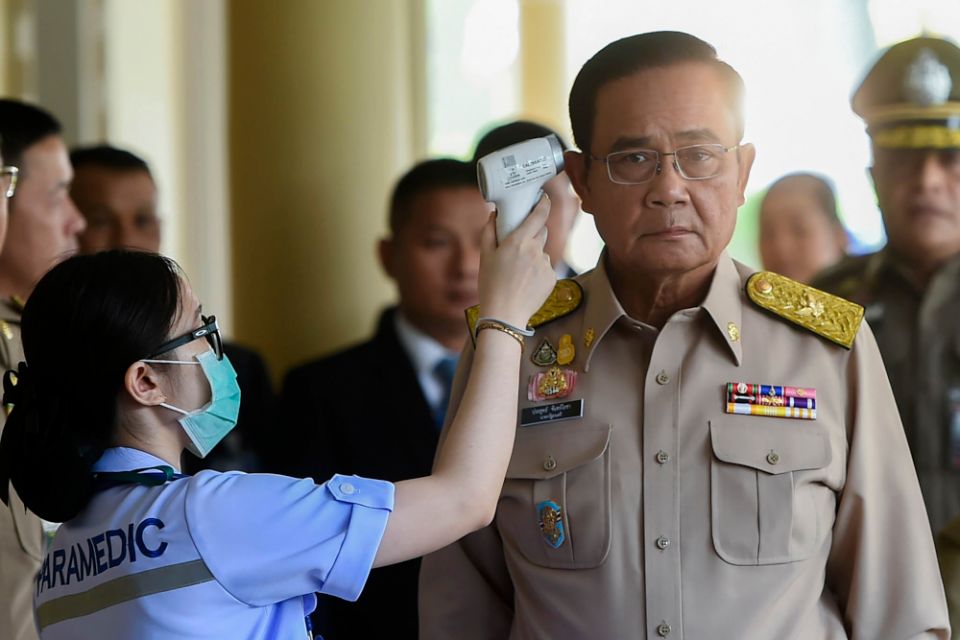 South Korea, with the worst outbreak outside of China, said it recorded 599 new cases of the virus Mar. 2, bringing the total to 4,335. The death toll there rose to 26.

To cope, the country said hospitals would be reserved for patients with serious symptoms or preexisting conditions, with mild cases now routed to other designated facilities.

"If we continue to hospitalize mild patients amid the continued surge in infections, we would be risking overworking medical professionals and putting them at greater risk of infections," said the country's vice health minister, Kim Gang-lip.

South Korea said it would keep its schools closed longer than previously announced, with a planned reopening of March 9 delayed another two weeks to March 23. And the leader of a church that's blamed for being the source of the country's largest cluster of infections bowed in apology.

"We also did our best but weren't able to contain it fully," said Lee Man-hee, the 88-year-old leader of the Shincheonji church, which some mainstream Christian groups reject as a cult.

In the Middle East, a worsening situation in Iran was accompanied by concern for its top leaders after a member of the council that advises Iran's supreme leader died of COVID-19.

Iran has confirmed 1,501 cases of the virus and 66 deaths, but many believe the true number is larger. Its caseload surged more than 250% in just 24 hours.

Major Shiite shrines remain open despite civilian authorities' calls to close them. The holy cities of Mashad and Qom, where Shiites often touch and kiss shrines in a show of faith, have had high numbers of infections. The Revolutionary Guard said it would install some mobile hospitals in response and authorities have been cleaning the shrines and even spraying down city streets with disinfectant.

"We will have two difficult weeks ahead," said Ali Raibiei, a spokesman for the Iranian government.

Meantime, Israel, an enemy of Iran, was deciding whether Prime Minister Benjamin Netanyahu stays in power. Among the voting sites were 15 stations especially for quarantined people who may have been exposed to the virus.

In Europe, leaders braced for worsening caseloads after the count surged in France, Italy and to a lesser degree Spain over the weekend. Italy's number of infection ballooned by 50% in 24 hours to 1,694. Health officials in northern Italy sought to bring doctors out of retirement and to accelerate nursing students' graduations to help an overwhelmed public health system.

The Louvre, the world's most popular museum, remained closed as its 2,300 workers expressed fears the site's international appeal could make it a prime target. At Fashion Week in Paris, attendees passed up kisses, instead greeting each other with elbow touches. In Germany, Chancellor Angela Merkel's outstretched hand was rebuffed by her interior minister at a meeting with migrant groups.

In the United States, authorities have counted at least 80 cases of the virus, two fatal, and concern was driving some to wipe store shelves clean of bottled water, hand sanitizer and other necessities. Both deaths were men with existing health problems who were hospitalized in Washington state.