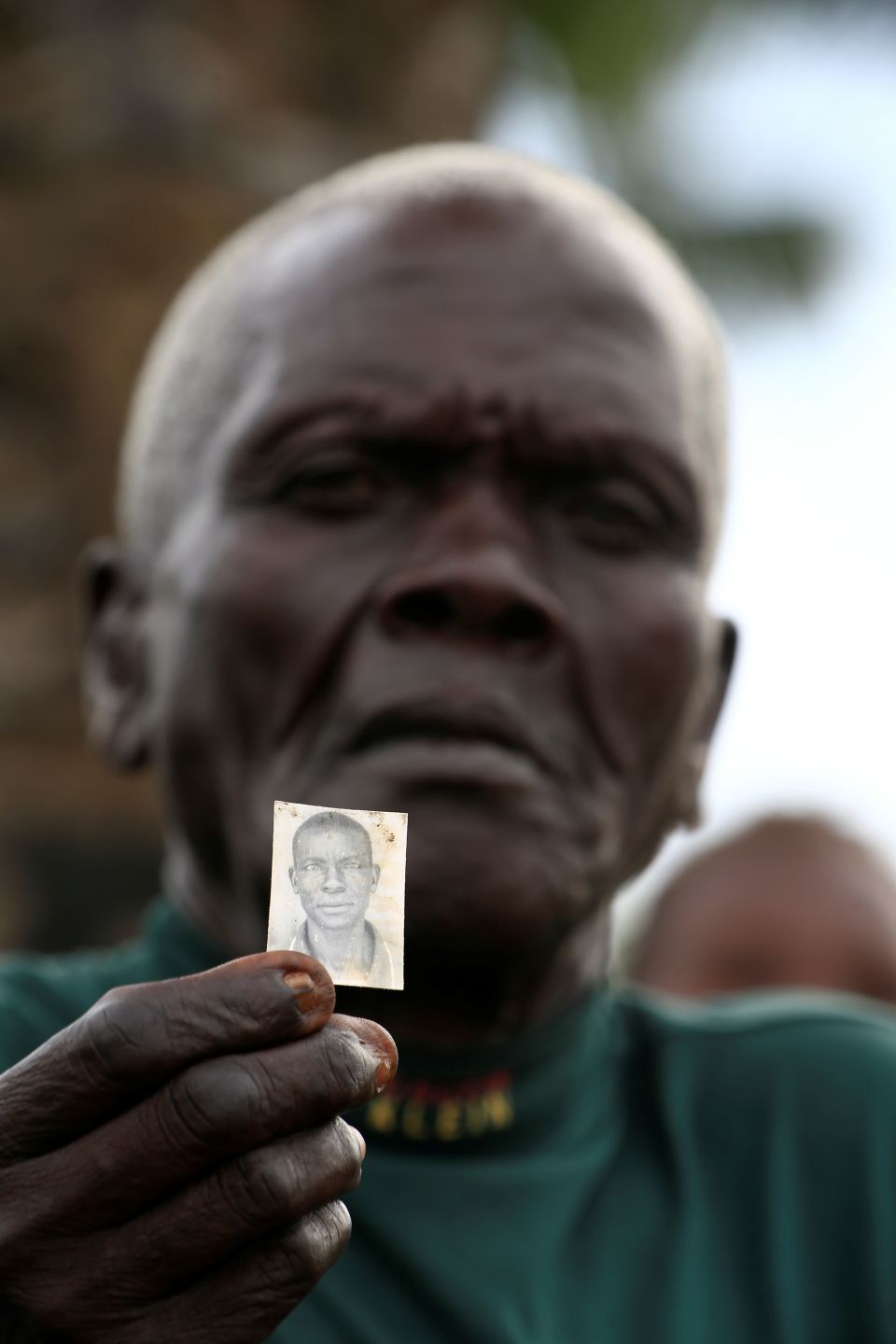 A refugee from South Sudan displays a picture of his son Oct. 25 at a camp in Moyo, Uganda. His son was killed by rebels in South Sudan. (CNS/Reuters/James Akena)

Vatican City — Pope Francis has made no secret of what he thinks is the motivating force behind the wars and conflicts underway across the globe.

"The powerful, some of the powerful, profit from the production of arms and they sell arms to this country which is against that one, and then they sell them to the one that goes against this one. It is the industry of death! And they profit," Francis told thousands of students meeting at the Vatican in 2015.

"An elderly priest that I met years ago used to say this: The devil enters through the pocketbook, through greed. This is why they don't want peace!" he said.

The wars in South Sudan and the Democratic Republic of Congo are among the many conflicts where this is evident, said Sister Yudith Pereira Rico, associate executive director of Solidarity With South Sudan.

At a Vatican news conference Nov. 16 announcing a prayer service for peace in the two suffering African nations, Sister Pereira said multinational corporations and the international community have a vested interest in allowing the wars to continue in both countries.

"While people are trying to survive this situation, multinationals are exploiting primary resources," she said. "The international community is giving a huge amount of help and (making) immense efforts but, at the same time, they are still selling weapons. So there is a duplicity in this attitude. This has to be known."

Solidarity With South Sudan is an international network of religious congregations that was formed to train primary school teachers, health-care workers, pastoral agents and sustainable farmers from all ethnic groups in the country with the hope they would learn tolerance and reconciliation along the way.

A member of the Congregation of the Religious of Jesus and Mary, Sister Pereira has worked for nearly two decades in countries throughout the African continent, including South Sudan.

"The people of South Sudan are suffering an armed conflict and a silent genocide that rarely appears in the media and surpasses the imagination" even though it began in early 2013, Sister Pereira said.

Military grade weaponry, however, is not the only thing used to wage war. In Congo, the violation and exploitation of women also is used as a weapon of war.

Franciscan Sister Sheila Kinsey, coordinator of the Justice, Peace and Integrity of Creation Commission of the international unions of women's and men's religious orders, said she spent eight years working on behalf of victims of domestic violence and abuse in the United States prior to helping victims of sexual violence in Congo.

The difference between working on sexual abuse there and in the United States "was that in the Congo, it was used as a weapon of war and such atrocities were committed to really humiliate a country. So we knew that that dimension had to be addressed," she said.

The people, especially women and children, also are innocent victims of greedy corporations and countries that plunder land and resources, she said, explaining that civilians "don't have adequate employment or the benefit of the resources that are from their own country."

One civilian told her, "You know, we have all these weapons but we don't have any industry that makes weapons. Where are they coming from?" Sister Kinsey said.

Michel Roy, secretary-general of Caritas Internationalis, said that while the main causes of the conflict in both countries are political in nature, multinational companies are profiting from "the favorable conditions" of a weakened state in order to exploit the country's wealth, particularly from the diamond mines in the southern Congolese province of Kasai.

Multinational companies, he said at the news conference, "think destroying in order to receive is the solution. It isn't, but that's the reality."

Congolese politicians, Roy added, also receive kickbacks and "are under the orders of these companies" to keep the conflict alive so they can continue to exploit the country's vast diamond industry.

"There are also regional interests so that the Congo remains this way, that it doesn't become strong," he said. "A big country with these kinds of resources can become an important country in Africa, like South Africa, like Nigeria."

The Vatican prayer service will be followed in January by a roundtable discussion primarily focused on building peace in South Sudan and Congo, Sister Pereira told Catholic News Service. But it also will be an opportunity to shed a light on the exploitation of innocent civilians.

"Of course one way (to build peace) is what we have been saying: to stop selling weapons, stop multinationals from working in war (zones)," she said.

The support given by Francis, who was scheduled to preside over the Nov. 23 prayer service for peace, Sister Pereira added, is a source of hope for the innocent victims caught in the crosshairs of conflict because it tells them that others are with them.

"They need a future and they need to see that other people are also talking about this," she said. "For them, it is important that people outside in Europe -- in Italy, wherever -- are meeting together for them. They can be resilient, they can have strength because they have that support."