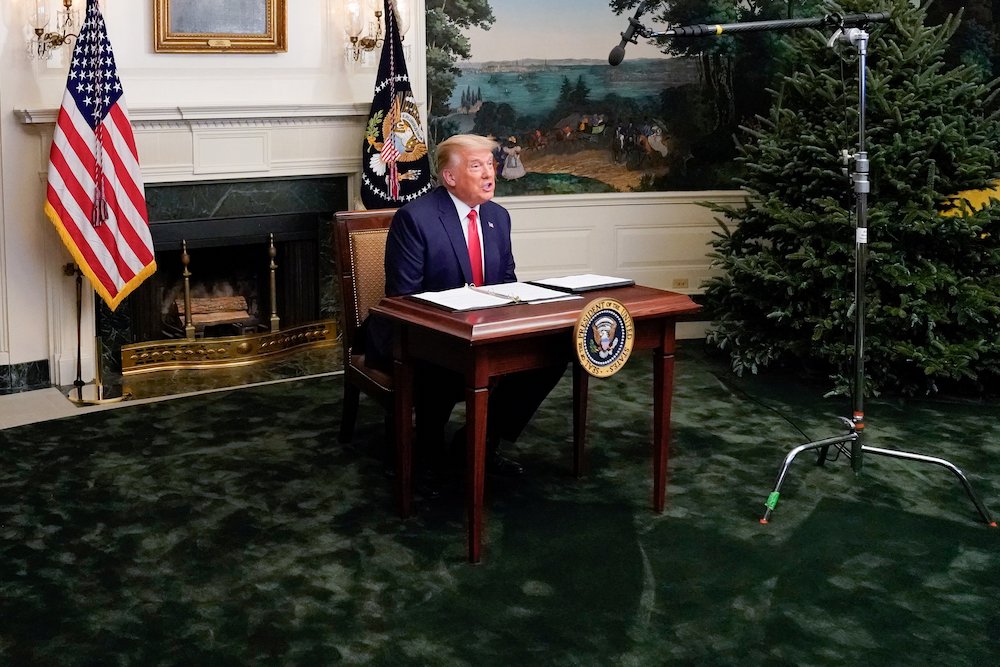 President Donald Trump participates in a Thanksgiving video teleconference with members of the military forces, at the White House in Washington Nov. 26. (CNS/Reuters/Erin Scott)

In the sacrament of reconciliation, before the freedom of absolution comes the actual confession of sins, in number and kind: an owning up and accepting of responsibility for one's wrongs. Only then can the penitent repair the harm done and move toward true reconciliation.

This Catholic model may be helpful in thinking about how our country can move forward after four years of the chaos, cruelty and wanton destruction of our hard-won democratic norms wrought by President Donald Trump.

Calls for President-elect Joe Biden's administration to focus primarily on reuniting the country and offering a "return to normalcy" are tempting. But such efforts will not ultimately be successful if we do not at least attempt to name what went wrong with our country's 45th presidency.

After four years with Trump at the helm, our democratic institutions lay bruised and battered. In a limited space, it's nearly impossible to enumerate the ways this president has bent our institutions to his will.

Just in the weeks since the Nov. 3 election, Trump has fired at least 12 senior administration officials, including the head of the Homeland Security agency that successfully protected the polls from foreign influence.

The president, who continues to threaten the peaceful transfer of power with increasingly preposterous claims of "fraud," was apparently upset with Chris Krebs' factual statement that the election was "the most secure in American history."

Trump has also recently taken the unprecedented step of summoning to the White House legislators from two states he lost, Pennsylvania and Michigan, in a vague attempt to have them work to quash the votes of their own constituents.

These steps, of course, do not come in a vacuum, but after years of an administration that has fired more federal officials than any in modern history, governed by falsehood after falsehood, abused the pardon power ad nauseam, and broke with long-standing ethical standards regarding the hiring of family members and self-dealing for government officials — to offer only a few examples.

We understand that Biden and the new administration will not want to waste its political capital rehashing the past. We also agree with those who argue that prosecuting a former president would be counter-productive.

Still, the aftermath of Trump's term is an appropriate time to take stock of what has gone wrong. Better yet, it is an appropriate time to identify the ways in which we can strengthen our constitutional order so that the next Trump-like leader isn't nearly as successful. (That person, after all, may be endowed with gifts of focus and drive foreign to the 45th president).

It is in this spirit that we call on Biden to consider appointing a non-partisan commission of constitutional experts to examine the way Trump's presidency damaged our democratic processes, and to offer suggestions for areas where they can be reinforced — in anticipation of the next president with autocratic tendencies.

Many of the suggestions, of course, will wind up being dead letters. Limiting the pardon power, for example, would take the passage of a constitutional amendment — something that is nearly impossible to imagine. But even if the suggestions offered do not immediately take hold, they will at least offer a blueprint for how we and future generations might begin to rebuild our democracy.

The country's decision to boot Trump from office was only the first of many steps we will need to take to rid ourselves of the disgrace he has rendered to us. Like the penitent, the next step is to acknowledge the wrong done and ask help in preventing it from happening again. Biden, our second Catholic president, surely understands.

A version of this story appeared in the Dec 11-24, 2020 print issue under the headline: A post-Trump truth commission is needed.