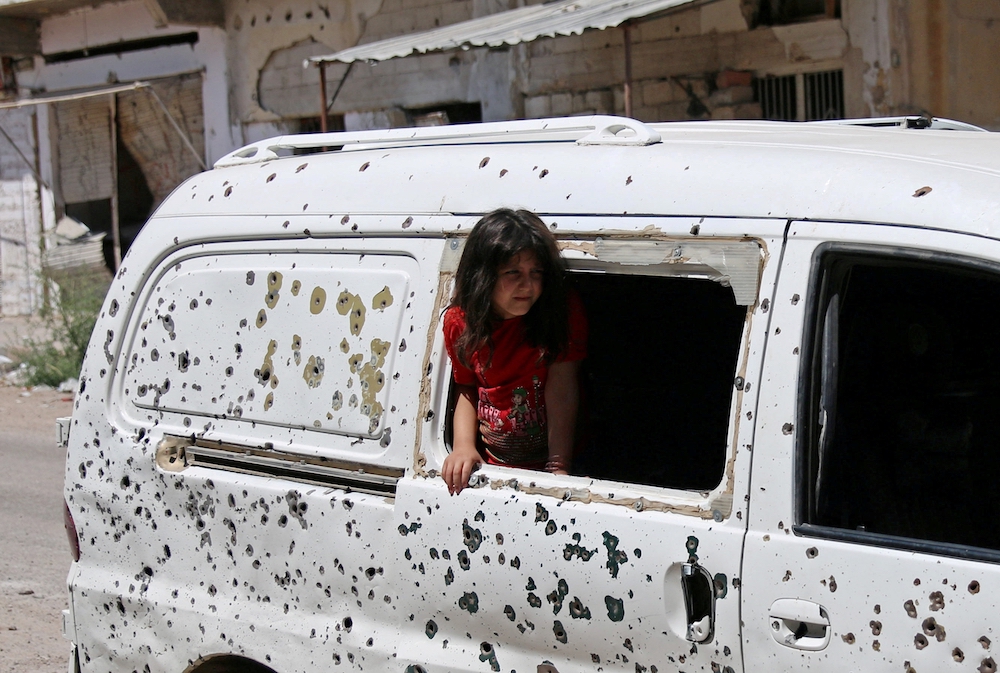 A girl in Daraa, Syria, looks out from a bullet-riddled bus July 9, 2017. Syria's civil war has now entered its 10th year. (CNS/Reuters/Alaa Al-Faqir)

The recent encyclical by Pope Francis, Fratelli Tutti, offers a critical step toward the illumination of nonviolence and a just peace moral framework.

Reflecting on conflict and fear, Francis clearly names war itself, not merely terrorist attacks, as an "affront to human dignity," which is the central, orienting theme of Catholic social teaching. This opens a door for Catholics to more clearly recognize that nonviolence is a positive reverence for human dignity and life, as well as what acting consistently with human dignity looks like in practice.

Turning our attention to dialogue and friendship as critical nonviolent ways of being, he highlights the importance of creating "processes of encounter … that build a people that can accept differences," rather than "the violence of those who despise differences." These processes of encounters manifest the first category of a just peace moral framework, namely, developing the virtues and skills to engage conflict constructively.

In contrast, "every act of violence committed against a human being is a wound; every violent death diminishes us as people. … Violence leads to more violence. … We must break this cycle which seems inescapable" (227). This recognition of how every act of violence cultivates a cycle of harm and violence illuminates the second category of a just peace moral framework, namely, breaking cycles of destructive conflict and violence.

To break such cycles of violence requires becoming "artists and architects of peace." He focuses us on forgiveness, i.e., a critical spiritual discipline, which is one of the just peace norms of engaging conflict constructively. Such engagement is about the power of nonviolence, as Francis reminds us of the One whom we follow: "Jesus never promoted violence. … He openly condemned the use of [violent] force to gain power over others" (238). Therefore, "To be true followers of Jesus today also includes embracing his teaching about nonviolence" ("Nonviolence: A Style of Politics for Peace," 2017).

At the same time being called to love everyone, including an oppressor, "does not mean allowing him to keep oppressing us … it means stripping him of a power … that diminishes his own humanity and that of others (241)." Such "stripping of power" is precisely what nonviolent force and resistance movements can enable us to achieve by focusing on diminishing key sources of power, such as material, intangible, legitimacy and sanctions; as well as impacting key pillars of support, such as religious leaders, business, and media. Francis is clear that "we cannot … unite by treating others with the same violence with which they treated us. Nothing is gained this way, and, in the end, everything is lost" (242).

With this vision, we can more clearly see that war and the death penalty are "false answers" that "ultimately do no more than introduce new elements of destruction" (255) and that "every war leaves our world worse than it was before" (261). In turn, Francis entitles a section "the injustice of war," signaling that war itself is unjust, and thus, not an activity to suggest is consistent with the ways of justice. Quoting St. Pope John XXIII, he says "it no longer makes sense to maintain that war is a fit instrument with which to repair the violation of justice" (260). Francis elaborates on this, writing, "war is the negation of all rights and a dramatic assault on the environment" as well as inconsistent with "integral human development" (257). Likewise, human rights and environmental sustainability are two norms in the just peace framework's third category: building sustainable peace.

Francis invites us beyond "theoretical discussions" for insight and to "touch the wounded flesh of victims."

Let us look at all those civilians whose killing was considered "collateral damage." Let us ask the victims themselves. Let us think of the refugees and displaced, those who suffered the effects of atomic radiation or chemical attacks, the mothers who lost their children, and the boys and girls maimed or deprived of their childhood. Let us hear the true stories…look at reality through their eyes…In this way, we will be able to grasp the abyss of evil at the heart of war. Nor will it trouble us to be deemed naive for choosing peace (261).

In the church's experiment of signaling that war or even "defense by means of military force" might possibly be justified under certain rigorous conditions, Francis highlights how this approach has been easily and consistently abused. He says "war can easily be chosen by invoking all sorts of allegedly humanitarian, defensive or precautionary excuses, and even resorting to the manipulation of information. In recent decades, every single war has been ostensibly 'justified' " (258). Thus, these criteria are not functioning adequately in reality to prevent and limit war; rather the signal of possible justification inherent in them is too often enabling war. That may be sufficient reason to shift to another kind of moral reasoning and strategy.

Further, with the increasingly destructive technologies, Francis proclaims, "We can no longer think of war as a solution, because its risks will probably always be greater than its supposed benefits. In view of this, it is very difficult nowadays to invoke the rational criteria elaborated in earlier centuries to speak of the possibility of a 'just war.' Never again war!" (258). Notably, in the footnote to this sentence, he draws on Augustine "who forged a concept of 'just war' that we no longer uphold in our own day." 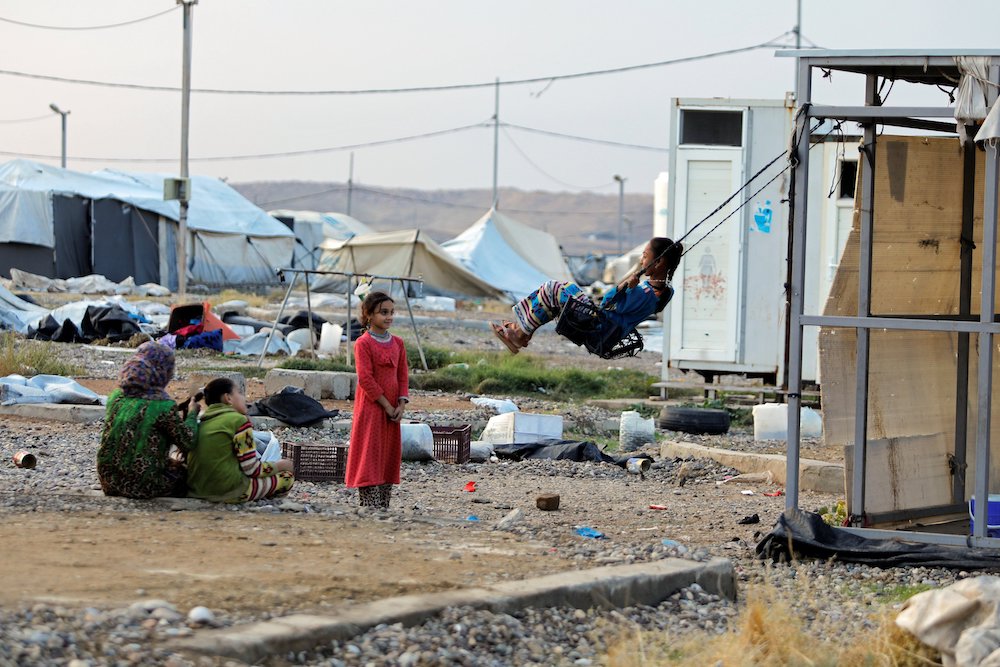 A girl near Mosul, Iraq, plays on a makeshift swing at Hammam Al-Alil camp where displaced Iraqis were preparing to be evacuated Nov. 10. (CNS/Reuters/Abdullah Rashid)

What is going on here? Francis is acknowledging aspects of our tradition, and yet planting some seeds for new insight and praxis. Reading the Spanish version, Leo Guardado says that Paragraph 258 is like a "passionate tango dance with carefully calibrated words that lead to Francis' final prudential judgement on this contested issue: not 'no more unjust war' but rather 'never again war.' "

Likewise Marie Dennis says, "I feel like what he was doing was moving the just war tradition further and further into the background, to put it on the shelf, where it belongs. It was progress in a very real way."

Meanwhile, Bishop McElroy says, "Given this reality, in tandem with the teachings of Pope Benedict, it is hard not to conclude that the church is abandoning the just war framework and seeking to construct a new moral framework that has not yet emerged."

Bishop Taylor argues for a shift to a just peace approach consistent with nonviolence.

Francis' critical reflection on war is coupled with the death penalty in some very intriguing ways. Francis grounds the inadmissibility of the death penalty not merely on practical terms, such as the abuse of the justification and practice, but on human dignity. He says that "not even a murderer loses his personal dignity."

In turn, with a "firm rejection of the death penalty" we can better see how "it is possible to recognize the inalienable dignity of every human being." That is, "if I do not deny that dignity to the worst of criminals, I will not deny it to anyone. I will give everyone the possibility of sharing this planet with me" (269).

We might consider a similar logic when faced with a potential war or other violent actors. Thus, Francis asks "Christians who remain hesitant on this point, and those tempted to yield to violence in any form, to keep in mind the words of the book of Isaiah: 'They shall beat their swords into plowshares.' For us, this prophecy took flesh in Christ Jesus who, seeing a disciple tempted to violence, said firmly: 'Put your sword back; for all who take the sword will perish by the sword.' "

Dan Cosacchi insightfully notes how Pope John Paul II's move to significantly close the space for possible justification of the death penalty is quite similar to what Francis is now doing with regards to justified warfare. On the death penalty, Francis took the next step from John Paul's insight to now declare its inadmissibility, and thus, also the moral reasoning that could justify such violence. Likewise, we will see what transpires with the increasingly unsteady relationship between the Catholic church and the moral framework of justified war.

In the meantime, we have another gift from Francis to focus our attention, resources and commitment toward active nonviolence and developing a new moral framework, such as just peace.

Eli McCarthy is a professor at Georgetown University in justice and peace studies, steering committee member of the Catholic Nonviolence Initiative, a project of Pax Christi International, and the director of the DC Peace Team. His recent book is a Just Peace Ethic Primer: Building Sustainable Peace and Breaking Cycles of Violence (Georgetown University Press, 2020).