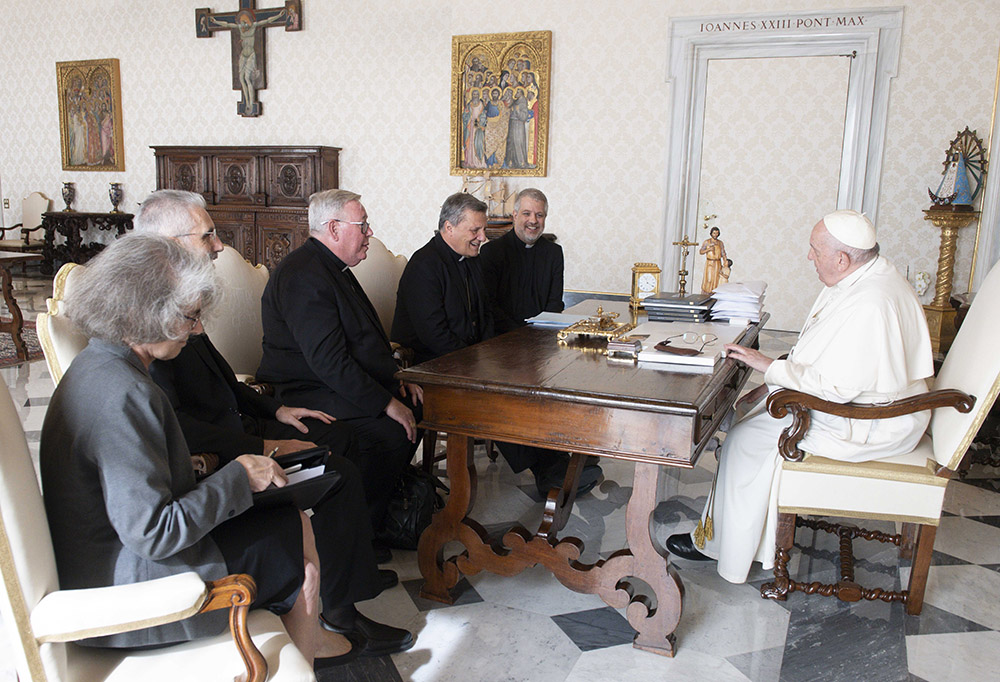 With the calling of a worldwide synod on synodality, Pope Francis set in motion the most extensive consultative process the world has ever seen.

In recent months, each diocese produced a report on its listening sessions, which were then synthesized by their national episcopal conferences. The conference reports were sent to Rome, where they were in turn incorporated into a "synthesis of syntheses" that was prepared for the next stage of the synodal process: a continental consultation.

For the millions of people who have participated in the synodal process, the synod is no longer an abstract concept but a lived experience. They have met together as brothers and sisters, shared their experience of listening to the word of God and reflected together on the future of the church.

My guess is that for Francis, this lived experience is as important as, if not more important than, any proposals that come from the synod.

The "Working Document for the Continental Stage," issued last month, gives us a picture of where the synodal process has been and where it might be going.

The document describes "the shared sense of the experience of synodality lived by those who took part," its authors wrote, including "the hopes and concerns of the People of God from across the globe."

This material will allow participants in the continental assemblies to listen to voices from every part of the world. The cultural, political, economic and religious experience of the church is very different in Africa, Europe, Asia and North and South America.

These continental assemblies will then draw up a list of priorities for the first session of the Synod of Bishops to begin next October.

The first section of the document reports that there was great appreciation of the opportunity to speak and to listen to others in the church.

"What emerges," according to the working document, "is a profound re-appropriation of the common dignity of all the baptized." This theological foundation "enables us to continue to promote and make good use of the variety of charisms that the Spirit with unpredictable abundance pours out on the faithful."

The second chapter is organized around a quote from Isaiah: "Enlarge the space of your tent!" where the tent is seen as a space for communion and participation, the necessary foundations of mission.

"Enlarging the tent requires welcoming others into it, making room for their diversity," says the working document.

At the tent's center "stands the tabernacle, that is, the presence of the Lord," explains the working document as it further develops the metaphor. "The tent's hold is ensured by the sturdiness of its pegs, that is, the fundamentals of faith that do not change but can be moved and planted in ever new ground, so that the tent can accompany the people as they walk through history. Finally, in order not to sag, the structure of the tent must keep in balance the different forces and tensions to which it is subjected: a metaphor that expresses the need for discernment."

The third chapter describes the church as needing to live "a Christological paradox: boldly proclaiming its authentic teaching while at the same time offering a witness of radical inclusion and acceptance through its pastoral and discerning accompaniment."

Rather than behaving like gatekeepers, we are called to a "vision of a Church capable of radical inclusion, shared belonging, and deep hospitality according to the teachings of Jesus."

The path toward greater inclusion requires "listening deeply and accepting being transformed by it." Obstacles to such listening include hierarchical structures, clericalism and socioeconomic differences.

In the listening sessions, many spoke of the need for the inclusion of many marginalized groups, including young people, those with disabilities, those unhappy with liturgical change, those who have had abortions, people who have divorced and remarried, single parents, people living in a polygamous marriage, LGBTQ people, those who left ordained ministry and married, and "women and eventual children of priests who have broken the vow of celibacy, who are otherwise at risk of suffering serious injustice and discrimination."

Also listed were "the poorest, the lonely elderly, indigenous peoples, migrants without any affiliation and who lead a precarious existence, street children, alcoholics and drug addicts, those who have fallen into the plots of criminality and those for whom prostitution seems their only chance of survival, victims of trafficking, survivors of abuse (in the Church and beyond), prisoners, groups who suffer discrimination and violence because of race, ethnicity, gender, culture and sexuality."

If liberals want to win Francis' support for their reforms, they will need to show how the reforms allow the church to better proclaim the Gospel and how they make us grow as a synodal church.

The document recognizes that "the challenges of tribalism, sectarianism, racism, poverty, and gender inequality" exist "within the life of the Church, as well as the world."

In response to these challenges, "the Church's mission is to make Christ present in the midst of His People through reading the Word, the celebration of the Sacraments and through all actions that care for the wounded and suffering." Peace building and reconciliation, as well as working for justice, are crucial parts of the mission. The church's mission in many places in the world involves dialogue with people of different religions.

The liturgy, which brings the community together, was seen as important in making communion tangible, enabling the exercise of participation and nourishing the momentum toward mission with the Word and the sacraments.

Finally, the synthesis said, "Almost all reports raise the issue of full and equal participation of Women." Many reports "ask that the Church continue its discernment in relation to a range of specific questions: the active role of women in the governing structures of Church bodies, the possibility for women with adequate training to preach in parish settings, and a female diaconate."

But on the question of priestly ordination, "much greater diversity of opinion was expressed," with some reports calling for it and others considering it a closed issue.

The fourth and final chapter of the working paper looks to the future, urging the participants to be a "Church that learns from listening how to renew its evangelizing mission in the light of the signs of the times, to continue offering humanity a way of being and living in which all can feel included as protagonists."

There is much controversy surrounding the synod. Liberals see it as an opportunity to push for reforms blocked by Popes John Paul II and Benedict XVI after the Second Vatican Council: married clergy, women priests, greater inculturation in the liturgy, acceptance of artificial birth control, a rethinking of sexual ethics, etc. Conservatives see it as an attempt by liberals to pressure the church into changing its teachings.

Liberals point to public support for their reforms; conservatives counter by saying that the church is not a democracy. (The synodal process certainly emphasized the importance of listening to the people of God, but bishops and the Vatican have also made clear that decisions will not be made by popular vote.)

Conservatives fear the pope will give into public pressure; liberals fear that the hierarchy will once again reject their reforms. The working paper acknowledges these fears.

Francis, on the other hand, is focused on improving the church's mission of proclaiming the Gospel and creating a more synodal church.

The introduction to the "Working Document for the Continental Stage" of the synodal process states that the basic question guiding the entire process is: How does this journeying together "allow the Church to proclaim the Gospel in accordance with the mission entrusted to Her; and what steps does the Spirit invite us to take in order to grow as a synodal Church?"

If liberals want to win Francis' support for their reforms, they will need to show how the reforms allow the church to better proclaim the Gospel and how they make us grow as a synodal church. If conservatives want to kill these reforms, they must show that the proposed reforms do exactly the opposite.

My view is that many of the proposed reforms would help the church better proclaim the Gospel and make it a more synodal church, but I am uncertain what Francis will think. My guess is that he will adopt more reforms than conservatives want but that he will go slower than liberals want. Doing otherwise might destroy the very synodality he wants to foster.