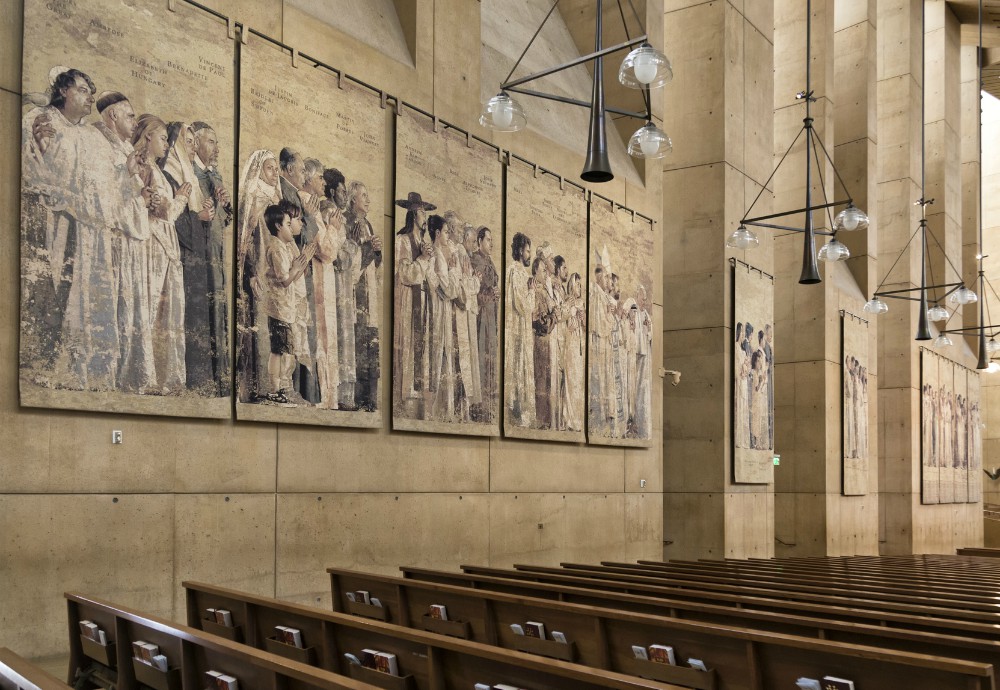 Tapestries depicting saints are seen in the Cathedral of Our Lady of the Angels in Los Angeles. (Dreamstime/Luis E. Torres Franco)

In the Cathedral of Our Lady of the Angels in Los Angeles, one can contemplate 25 tapestries that depict 135 wonderfully diverse saints. These holy people, Black, white, brown, male, female, young and old, appear in all their beautiful humanity, representing every era of our Christian history and myriad ministries and professions. Silently, they accompany the living who pray in the cathedral. Their diversity reminds us that we're all called to sainthood.

Solemnity of All Saints

The author of Revelation described God's blessed people as 144,000 elect from Israel plus "a great multitude, which no one could count," from the other nations. Although 144,000 sounds like a lot, the number is puny in comparison to what it symbolizes.

Twelve, the number of tribes of Israel, represents the entire Jewish people. The author squared that number and then multiplied it by 1,000. This total is but a conservative estimate of what God promised Abraham by saying that his descendants would be as numerous as the stars in the sky.

That number was then exceeded by the uncountable people from every other land and nation and tongue.

These people are wearing the white robes of victory, the sign that they have come through persecution as sharers in the blood of the lamb. Following Christ, they have been saved through although not from persecution. They are the people John calls the children of God, the ones whom Jesus describes as the blessed.

In what we call the Beatitudes, Jesus describes his followers' blessed way of life in eight ways. One approach to understanding this teaching is to consider it as a threefold insight into a disciple's interior dispositions; the way those dispositions are expressed in dealings with others; and the results for which Jesus' disciples can hope.

The last of the beatitudes, articulated in two different ways, reminds Christians that Jesus is their model and that the more they imitate him, the more they can expect to share his sorrows, his sufferings and his joy.

Speaking about the attitudes that mark disciples, we hear Jesus call them to be poor in spirit, meek and pure of heart. These attitudes characterize a person who trusts in God for everything.

Jesus' word "poor" depicts genuine beggars. The poor in spirit are people who delight in the realization that everything they have and are is a free gift from God. Those who cultivate that attitude sound like Jesus' mother, who sang, "The Lord has done great things for me."

Such an attitude is incompatible with pretension or lording it over others. It culminates in gratitude. The gratitude of the meek and poor in spirit leads inevitably to a purity of heart like that of Mary, who defined herself solely as "the handmaid of the Lord," a person who decided that the entire purpose of her life was to respond to God's great love.

Obviously, the attitudes Jesus described spring from a deep, loving relationship with God. Handmaids and servants of God are people who have opened themselves to feel with God's heart. They hunger and thirst for justice because they long for the world to be as God created it to be: a milieu in which everyone and everything flourishes, in which the gifts of each enhance the life of all.

God's handmaids and servants mourn over the chasm that separates what is from what ought to be. The poor in spirit are impelled to express mercy because they know that when they received mercy, it made them whole, brought them closer to others and made the world a better place.

The meek and merciful who hunger for justice are uniquely equipped to be peacemakers. Because they naturally seek to understand others' deepest desires, their empathy breeds trust, and thus they can open others' hearts to seek the good of the whole.

Jesus calls these people the blessed because they have caught onto his understanding of life. Learning from him, leaning on grace, each in their own unique way, they fulfill their potential as genuine human beings.

What we can note about them — whether they be the saints depicted on the tapestries or the ones who inhabit the streets where we live — is that they come in every shape, size, color and age. They are set apart, not by their intelligence, talent, education, work, mother tongue or culture, but by the fact that, like Jesus and Mary, they have accepted their life as a vocation to holiness, an opportunity to receive and spread God's limitless love.

From Nov. 1 to Nov. 7, we are celebrating National Vocation Awareness Week, a reminder that each of us has a unique path to sainthood. Some few are called to religious life or priesthood; all are invited to live the joy of beatitude.