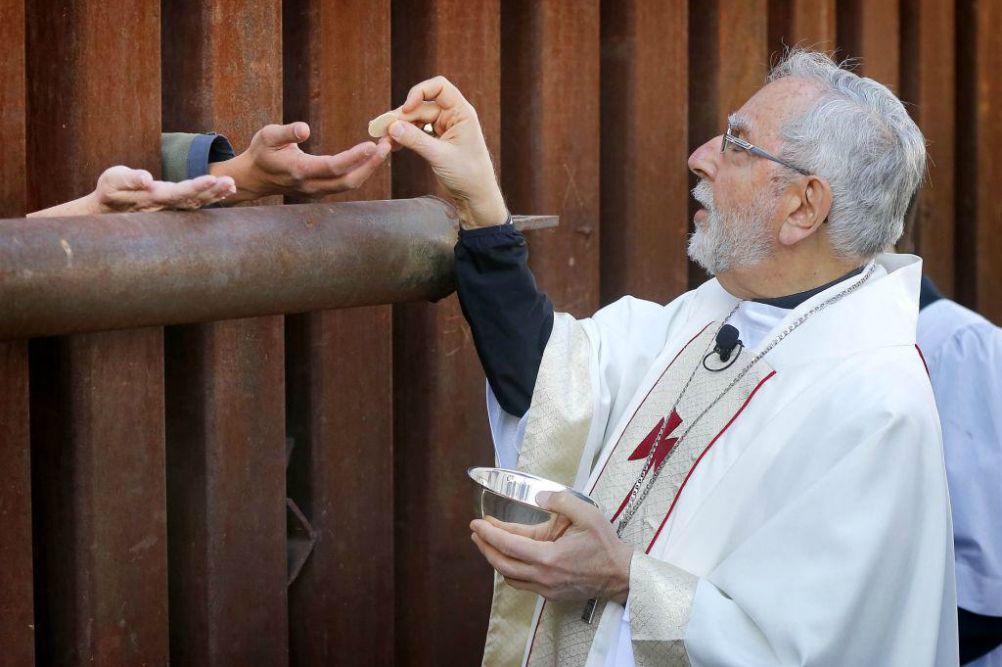 Bishop Gerald Kicanas distributes Communion through the border fence in Nogales, Arizona, during a border Mass in April 2014. (CNS/Nancy Wiechec)

Christ always surprises. He revels in the unexpected. He would have loved the game hide and seek. One never knows where you might find him. Christ said I can be found where you least expect, in the littlest and weakest among us. As he said, "Whatever you do to the least of my brothers and sisters, you do to me." I marvel at the unanticipated epiphanies of Christ I have experienced along the southern border of the United States.

I met Christ startlingly in a small chapel in Altar, Sonora, Mexico, some years ago. Scattered around the little chapel there, I saw young, frightened men, mostly wearing T-shirts emblazoned with the image of Our Lady of Guadalupe or clutching rosary beads. These men knelt in prayer. Like Christ kneeling in the garden, they sought the help of God, anxious and desperate, imagining what was ahead of them in their journey north.

They sought to harm no one. The only desire that drove them was a better, more dignified life for themselves or their families. Like Dorothy Day, the great social activist who saw Christ in the faces of the hundreds of homeless men who stood in the Mott Street bread and coffee line she started, I looked into the eyes of these young men and saw the suffering, pained face of Christ.

I stood on the make-shift road from Altar to Sasabe, Arizona, as van after van passed, crowded with migrants headed to the border. One van stopped. A lady opened the van window and shouted, "Su bendición, Padre." I looked inside and saw people tightly jammed together like in subway cars in the height of rush hour. Their faces mirrored the anxiety they were feeling. I raised my hand in blessing and saw the One who knows our suffering, for he suffered mightily. They seemed comforted by a simple sign of blessing. God accompanied them. God stood beside them, at their side. He was inside that packed van, squashed alongside the others.

I celebrated Mass at the border separating Ambos Nogales, two cities divided by a wall. Bishop José Leopoldo González, Bishop of Nogales, Sonora, Mexico, and I concelebrated, he on the United States side and I on the Mexican side. We joined hands through the steel barriers separating our people. I saw the Christ with arms outstretched trying to bring our two worlds together. I could almost hear the angels singing, "In Christ there is no east or west, in him no south or north, but one great fellowship of love throughout the whole wide world."

I met a young boy, 15, at the University Medical Center in Tucson, Arizona. He was from Chiapas and spoke neither Spanish nor English but only his indigenous language. He was from a family of 10 being raised by a single mother who was suffering from depression. He decided to head to the border to catch up with his uncle who lived in Tucson. He hopped the "beast," a train that transports people to the North. At one point he jumped off and had both legs severed under the speeding train. As he lay in the hospital bed, I could see his frustration, his despair. He who had left home to provide for his family, now disabled, might be a further burden for his family.

I saw in this young boy the Christ who left the company of his parents to get about his ministry. Christ was intent to carry out his Father's work no matter what, even as this young man was determined to improve the lot of his mother and siblings. Love always costs, demands sacrificing self. 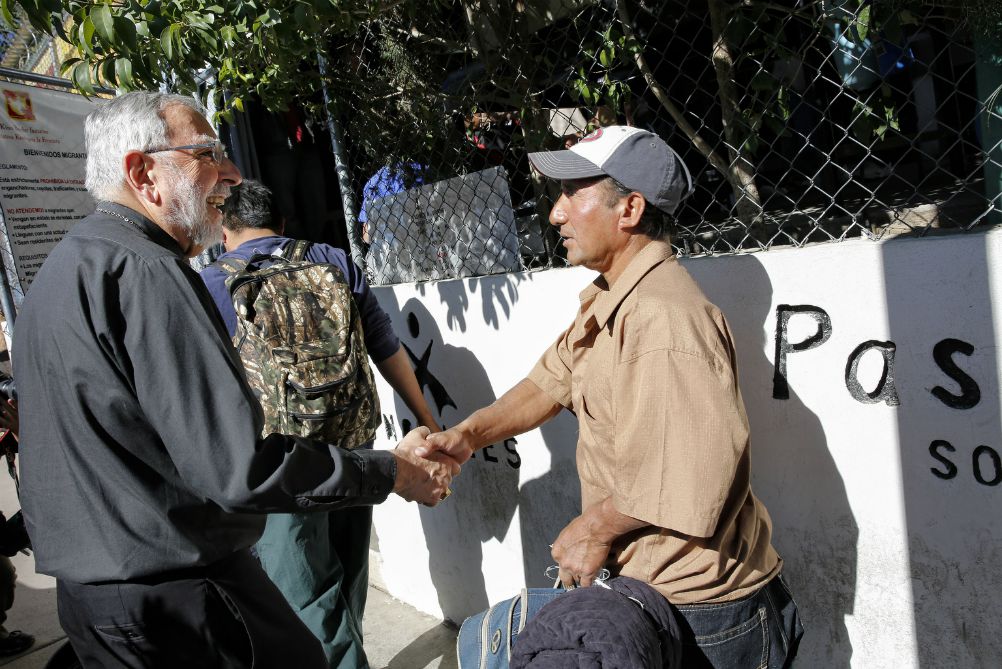 Bishop Gerald Kicanas greets men entering the soup kitchen of the Kino Border Initiative in Nogales, in the Mexican state of Sonora, in this 2014 photo. (CNS/Nancy Wiechec)

Along the border, Samaritans place water to assist migrants, with inadequate provisions, crossing the unforgiving Sonoran Desert. You cannot carry enough water to prevent dehydration from the unrelenting, blistering Arizona sun. The Samaritans' actions mirror those of Christ, who felt human pain and was moved with compassion at the sight of those harassed and helpless, like sheep without a shepherd. Christ lives in our desert, his hands place the water to quench people's thirst.

Every day along the border in Ambos, Nogales, Jesuit Fr. Sean Carroll, and his Kino Border Initiative team serve food to migrants who have been deported into Mexico. The migrants sit at tables with some semblance of dignity and are served homemade meals. It reminds me of Christ multiplying food for the masses. The volunteers, often high school students, imitate the One who provided for the weary.

Sore, blistered feet of the migrants are washed and bandaged by members of the Kino team. Traversing the desert takes its toll. The trek ravishes one's feet. I often picture Christ taking off his garment and kneeling at the feet of his disciples, washing their feet.

So many along the border mirror the actions of Christ, imitate his tender compassion, live out his call to serve, practice his self-sacrificing love.

[Gerald Kicanas was bishop of the Diocese of Tucson, Arizona, from Jan. 15, 2002, to Oct. 3, 2017. Since September 2018, he has been serving as apostolic administrator to the Diocese of Las Cruces, New Mexico.]

Related: Simple action of carrying water in the desert prevents migrant deaths
A version of this story appeared in the March 8-21, 2019 print issue under the headline: I saw Christ on the southern border.