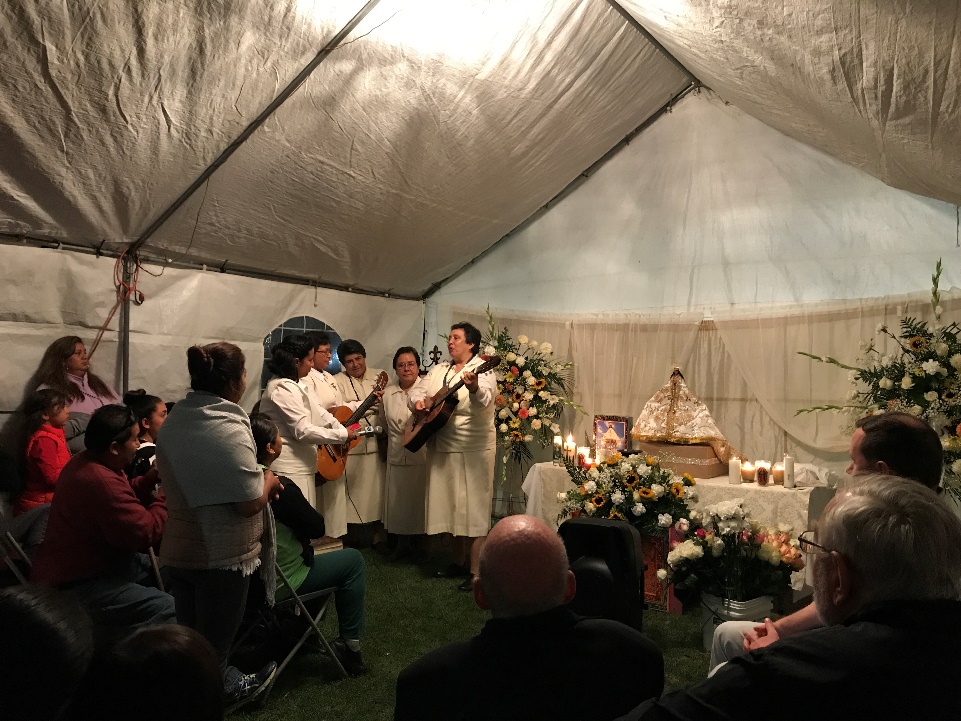 A group of five Catechist Sisters of Jesus Christ Crucified sing during a community rosary in Salinas, California. (Tim Muldoon)

"Con todo mi alma … With all my soul," sang the group of five sisters, clad in the habits of their Guadalajara-based order, the Catechist Sisters of Jesus Crucified, ministering in Salinas, California, thanks to a grant from Catholic Extension Society.

The song, a kind of suscipe prayer — that is, a prayer of self-donation to God, captured the feeling of the 100 or so people I was praying with recently in the California barrio. There was a tent set up between the blocks of apartments where the participants, mostly natives of Oaxaca, southern Mexico, lived. They were recent immigrants to this place, the home of John Steinbeck, drawn like Steinbeck's characters by the promise of work in the farms or factories nearby. Many spoke Spanish; others spoke their native Náhuatl or Mixteca; but all had come to pray the rosary as a community, and to bring their needs before God. Seldom before have I witnessed such a profoundly personal experience of common prayer.

The sisters were performing a song written by a sister of their community, expressing their commitment as women religious dedicated to the Lord's work; but they also gave voice to the longings expressed in the whole community. The focal point of this gathering was a makeshift shrine to Our Lady of Juquila, a devotion originating in Oaxaca in the 17th century. La morenita, as she is sometimes called — "the little brown one" — welcomes millions of pilgrims each year, though outside of Mexico she is less well-known than the Virgin of Guadalupe.

The devotion had started after a Spanish Dominican, Jordán de Santa Caterina, who brought the statue of the Virgin to the south of Mexico, gave her to his servant when he died. When a fire consumed the small village, Amialtepec, the statue was spared, but her skin turned the same color of brown as that of the local villagers — natives of Mayan descent. The servant kept her with great reverence, and the locals began to attribute miracles to her.

Later, a priest in the neighboring town of Juquila wanted her to be installed in his church. The statue was brought there several times, but each time the Virgin reappeared in Amialtepec among her devotees. Years later, after the priest gave up, his successor petitioned the bishop, who arranged a formal procession of the image to the church of Santa Caterina Juquila, where it remains to this day.

Many people make a pilgrimage with their requests to the pedimento ("asking place"), about 1 kilometer from the church. They bring written requests, or perhaps an image shaped with the clay of the local area. Some speculate that the significance of the clay is that it represents the very ground where the Virgin sought to remain, until the priest of Juquila made a formal and dignified petition in the name of the church.

Like the Virgin of Guadalupe, the Lady of Juquila has a heart for the local people and their land; one can sense in the devotion a certain populism and even anti-clericalism, reflective of the Virgin's desire to be at home with local peasants rather than imprisoned in a church. She feels for them, grants their requests, and wants to be their mother. Even after papal coronation of the devotion in 2014, the devotion remains one that is deeply tied to a people and a place.

Hence the crowd that gathered there in Salinas, California, this year. A community leader described to me how residents take turns caring for the image, but this weekly rosary was a summons to the entire community of Oaxaquenõs to bring their prayers before the Virgin. They spoke their petitions aloud: "for safety on our streets," "for our young people" and "for healing." They named the mysteries, each spoken by a different person leading the prayer, and responded antiphonally. They prayed the Fatima prayer after each decade as well as the prayer of St. Michael. They ended with a beautiful litany of the Virgin. I followed along on my rosary app in Spanish, promising myself that I would learn the prayers by heart for the next opportunity.

Afterward, many came forward to receive a flower and brush it against the image of the virgin, in order that it be a sign to a loved one of the mother's protection. Watching them, I called to mind the words of the song that the sisters sang: "with all my soul." Many of these people lack documents and are fearful of being deported. They live amid violence — a park nearby bears the name of a child killed in gunfire — and economic uncertainty. Many have fled places where there is even more violence, and they bare their souls to the Virgin in the hopes that she might grant them safety, solace, perhaps even a measure of comfort.

Now, when I finger the rosary that I always carry with me — a rosary made by women from Oaxaca — I join my prayer to theirs. Virgin of Juquila, "to thee do we send up our sighs, mourning and weeping in this vale of tears."

[Tim Muldoon, adjunct professor at Boston College, is the director of mission education at the Catholic Extension Society, which supports and strengthens poor mission dioceses across the United States. All Soul Seeing columns can be found at NCRonline.org/blogs/soul-seeing.]