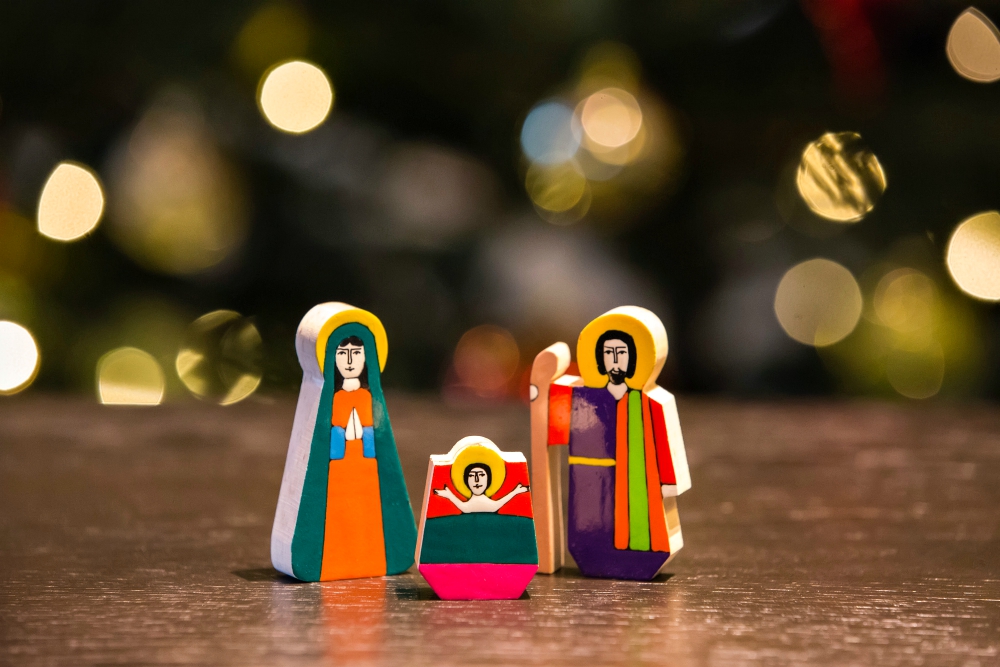 Editor's note: This essay first appeared in Goodness and Light: Readings for Advent and Christmas (Orbis Books 2015), compiled by Soul Seeing editor Michael Leach with James Keane and Doris Goodnough. It is reprinted with permission.

One good day, the Son of God wanted to know how the boys and girls were, whom, when he was among us, "he touched and blessed," and of whom he had said: "Let the children come to me because theirs is the kingdom of God" (Luke 18:15-16).

Like in the old myths, he mounted a celestial ray and reached Earth a few weeks before the Nativity. He assumed the form of a street sweeper. That way he could better see the people passing by, the well-illuminated stores, filled with things wrapped as gifts, and especially his smallest sisters and brothers who were walking around, not well-dressed and many of whom were hungry, and begging. He became very sad because he understood that almost no one followed the words he had said: "Who receives one of these children in my name, receives me" (Mark 9:37).

He also saw that no one spoke of the Baby Jesus who would come, secretly, on the night of the Nativity to bring gifts for the children. His place had been taken by a good-natured old man, dressed in red, with a long beard and carrying a sack, who would constantly call out the silly refrain: "Ho, ho, ho, Santa Claus is here." Yes, he was in the streets and in the great stores, embracing the children and taking from his sack the gifts that the parents had bought and put there.

It is said that he had come from far away, from Finland, mounted on a sleigh pulled by reindeer. The people had forgotten another little old man, this one a really good one: St. Nicholas. On Nativity, he would hand out gifts to poor children, saying that it was the Baby Jesus who sent it to them. No one would speak about all that. They only talked about Santa Claus, invented a little over 100 years ago.

As sad as seeing the abandoned children in the streets was seeing how people became giddy, seduced by the lights and the splendor of the gifts, and the thousands of things parents usually buy to give away on the occasion of the Nativity Eve meal.

The advertisements, mostly misleading, are shouted out loudly, arousing the desire of the children who run to their parents, asking them to buy them the things they have seen. The Jesus Child, dressed as a street sweeper, came to realize that everything the angels sang that night throughout the fields of Bethlehem, "We proclaim the joy that will also be for all the people, because today has been born a Savior. … Glory to God in the highest and peace on Earth to people of good will" (Luke 2:10-14), means nothing anymore. Love has been replaced by objects, and the joyfulness of God, who made himself a child, had disappeared in the name of the pleasure of consumption.

Sad, he mounted another celestial ray, but before returning to heaven, he left a letter he had written for the children. They found the letter under the doors of their houses and, especially, of the huts in the outskirts of the city, called favelas. The letter said:

If on seeing the manger, you see there the Baby Jesus, with Joseph and Mary, and you are filled with faith in God who made himself a child, a child like any of you, and who is Godbrother who is always with you.

If you manage to see in the other boys and girls, especially in the poorest, the hidden presence of the Baby Jesus being born in them. If you are capable of making the child hidden in your parents and the other grownups you know be reborn, so that from them spring forth love, tenderness, caring and friendship instead of many gifts.

If on seeing the manger and seeing Jesus poorly dressed, almost naked, you remember so many other children who are equally poorly dressed, and you hurt deep in your heart because of this inhumane situation, and you want to share what you have with others and from now you wish to change these things when you are an adult, so that never again would there be boys and girls who cry of hunger and cold.

If when you discover the Magi who bring gifts to the Baby Jesus you think that even the heads of state and other important persons of humanity come from all over the world to contemplate the greatness hidden in this small child who cries in the hay.

If on seeing in the Nativity scene the oxen and the donkey, the sheep, goats, dogs, the camels and the elephant, you think that the whole universe is also illuminated by the divine child and that everything, the stars, suns, galaxies, stones, trees, fish, animals and all of us, the human beings, form the great house of God.

If you see the sky and see the star with its luminous tail and remember that always there is a star such as the one of Bethlehem over you, that accompanies, illuminates and shows you the better paths.

If you listen carefully and hear through your inner senses a soft and celestial music like that of the angels over the fields of Bethlehem, who announced peace on Earth.

Then, know that I, the Baby Jesus, am being born again and am renewing the Nativity. I will be always near, walking with you, crying with you and playing with you, until the day when all, humanity and universe, arrive to the house of God, who is Father and Mother of infinite goodness, to be eternally happy together as a great reunited family.

[Leonardo Boff is Brazil's best-known theologian, author of more than 80 books, including Cry of the Earth, Cry of the Poor, Jesus Christ Liberator and Francis of Rome, Francis of Assisi: A New Springtime for the Church.]