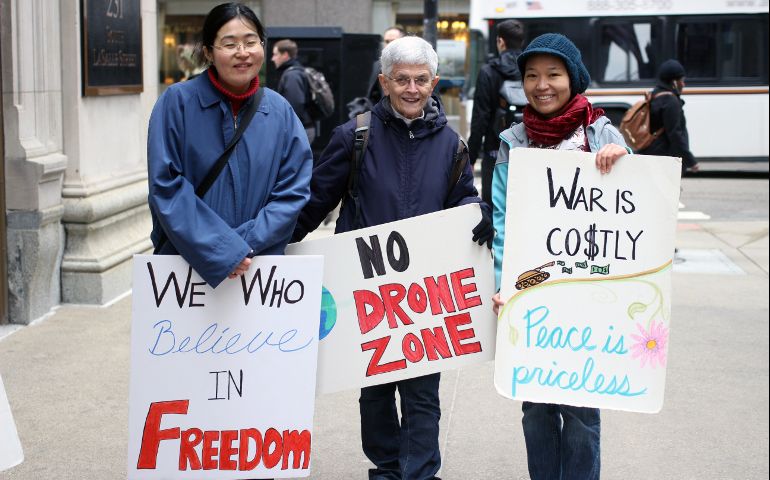 By most accounts, two things allowed the 8th Day Center for Justice to come to fruition in 1974: a new churchwide interest in social justice sparked by the Second Vatican Council in the early 1960s and the dogged work of women religious.

For more than four decades, 8th Day has served as a prophetic voice against injustice, educating others about the oppressive structures operating in their own backyards.

Now, 43 years after 8th Day first opened its doors in downtown Chicago, women religious are shepherding the center through its final year — an intentionally monikered "year of gratitude" that kicks off Sept. 30.

"We don't want to spend the year crying," said Sr. Dorothy Pagosa, a Sister of St. Joseph of the Third Order of St. Francis who joined the 8th Day staff in 1986. "This is a good thing in the long run."

It's good, Pagosa and other staffers say, because there is no longer a critical need in 2017 for an organization like 8th Day — one that looks at the connected systems of injustice in the United States — to exist.

That doesn't mean the nation's justice problems have been solved, staffers are quick to point out. However, unlike the situation 40 years ago, it's now taken for granted that justice work must be intersectional.

"You have Black Lives Matter folks supporting immigration rights work. You have environmentalists doing work and making the connections with women's lives," said Sr. Kathleen Desautels, a Sister of Providence of St. Mary-of-the-Woods, Indiana, who joined the staff in 1986. "The interconnectedness and the outpouring of groups working together is palpable. It's a wonderful experience to have worked this long and to see it come together the way it has."