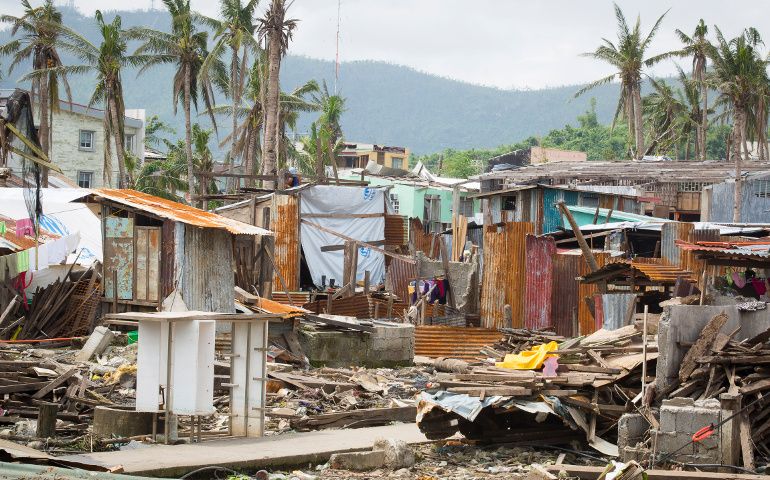 Photos shows homes left in ruins months after Typhoon Haiyan hits central Philippines This photo taken Feb. 10, 2014, from the home of Emmanuel and Maria Rosevilla Margate shows homes left in ruins in Tacloban, Philippines. The family huddled together in their block home Nov. 8, 2013, as Typhoon Haiyan made shambles of many homes in their commun ity known as Barangay 54A. (CNS photo / Tyler Orsburn)

Sr. Mary Carmela N. Cabactulan stepped outside the Sisters of Mercy convent in Tacloban November 8, 2013, to face the biggest crisis in her more than 40 years as a member and now leader of her community. The raging winds of Typhoon Haiyan had ripped off roofs, shattered walls and left the buildings of the school that had served 1,500 students in shambles under a thicket of fallen trees and debris. Damaged, too, was the adjacent 50-bed hospital the sisters ran.

"Sisters had gone ahead and they were saying, 'our school is gone, Sister. Our school is really gone,'" she remembers. "I went down and I couldn't see anything because it was covered with trees." She didn't recognize the school, she said, and was unable to even see the roads because of all the fallen trees. More frightening, "I really didn't know what to do," she said. "We had no money, no way to rebuild."

Three years later, happy shouts of "Sister, Sister," greet her as she walks through the school grounds where students compete in sports, games and dance contests as part of an intramural and physical education festival. Newly planted trees, a building that still is not fully repaired, and roofs painted with "Thank you Caritas Germany" are the only signs on the campus of the trauma that gripped the sisters' community and the surrounding region from the super typhoon.

Moving beyond 'jobs at any price'

Meet the young Catholic suing the government over climate change