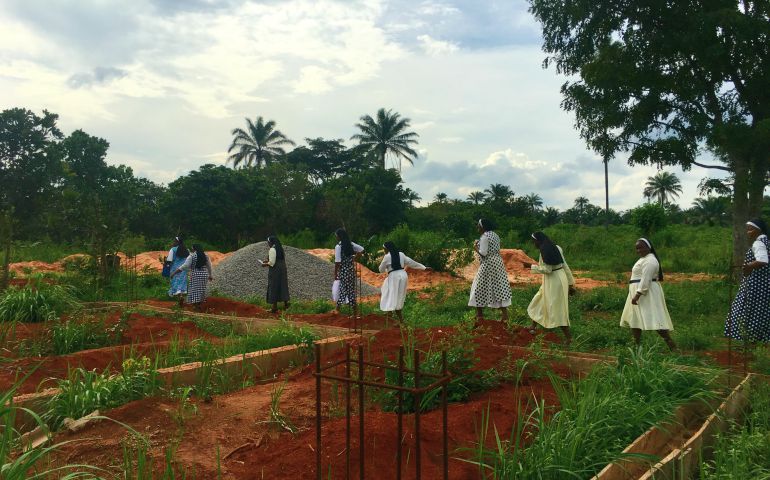 Augustinian Sisters of the Mercy of Jesus visit the future site of their new convent and chapel in Nigeria's Idah Diocese. (Festus Iyorah)

Kogi, Nigeria — Feb. 26*, 2014, is a date Sr. Christiana Akpah, prioress of the Augustinian Sisters of the Mercy of Jesus congregation, does not like to remember. Overnight, one of her congregation's central projects, a 3-decade-old hospital in Shuwa, was attacked in a night of violence, forcing 21* sisters to become homeless.

The day was meant to be a celebration. Most of the sisters in her congregation were in Jalingo, a city six* hours south, about to celebrate the final profession of five sisters. Originally, the profession had been scheduled to take place in Shuwa, where the sisters run a medical facility* in northeastern Nigeria.

The invitations were already printed for Shuwa and the preparations were underway. But at the last minute, Sr. Maria Claude, the Augustinian superior general from France, asked the ceremony to be moved from Shuwa as she was worried about the security situation. Just four* sisters were left behind in the congregation's convent in Shuwa to oversee administrative duties and attend to patients.

At 8 p.m. on Feb. 26*, Boko Haram insurgents burst into the Shuwa hospital and convent with grenades, machetes and AK-47 rifles. Fortunately, there were no patients staying overnight. A hospital staff person on duty escaped over a wall. The terrorists killed two security guards who had been stationed at the gate, and set the maternity and labor ward* ablaze. Trying to force the sisters to come out, the terrorists strafed the convent with bullets and threw grenades into the compound, in what was likely an attempt to kidnap the sisters.

Two of them, Monica Yedzumi and Augustina Emmanuel, spoke in an interview* about how they sweltered in their pajamas, armed with rosaries clutched in their fidgety hands. They were gripped by fear, praying continuously as the chaos unfolded around them, Emmanuel recalled.

"The whole thing played out like one of those American war movies," Emmanuel said.

*This preview has been edited to correct several errors.