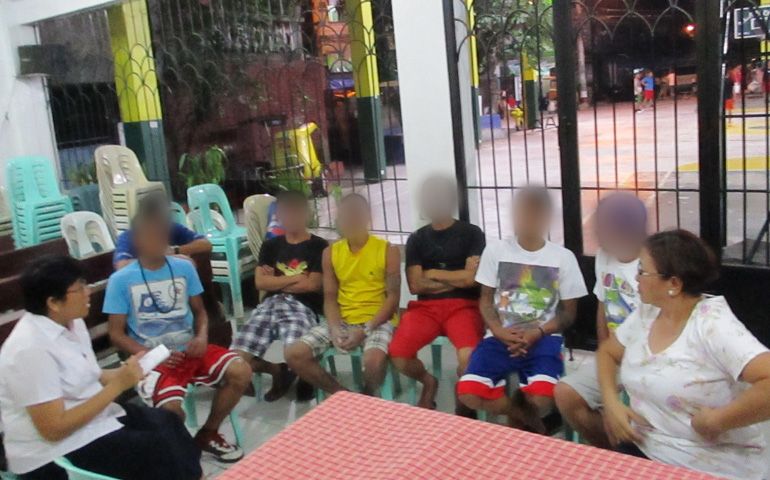 Manila, Philippines — After emerging from a face-to-face meeting with six drug users, Sr. Maria Juanita "Nenet" Daño heaves a small sigh of relief that perhaps these men will not meet a bloody end like dozens of others in the San Andres Bukid slum area in Manila, where she works. They have come forward to undergo counseling, hoping to change their ways and avoid becoming victims in the government's ongoing anti-drug war.

Still, the sister of Our Lady of Charity of the Good Shepherd sees danger ahead for the self-confessed drug users because their names are on the police list. This means they are marked men, targets in massive police operations called "Oplan Tokhang" (Tokhang is a contraction of the Filipino words that mean "knock" and "invite"), which have been in force since Philippine President Rodrigo Duterte took office in July 2016.

"They are afraid they'd get killed," Daño said of her six clients, ages 25 to 47. "They also responded to the call of the barangay (a local governmental area) head, a woman, to make the barangay drug-free."

Depending on who is counting, the anti-drug war has claimed from 2,000 to 7,000 plus lives, both in police operations and vigilante-style or extrajudicial killings, carried out without any due process. Daily news reports carry incidents of summary executions whose perpetrators are unidentified. The killers often leave a note that the death is drug-related.

On the night of July 9, about five kilometers (3.1 miles) from Daño's area, a man was killed in front of the Pope Pius XII Catholic Center where the Catholic Bishops' Conference of the Philippines, also known as the CBCP, had just finished their meeting and election of a new president for 2018 and 2019. Daño and her group of lay partners had also just ended their prayer vigil there.

Archbishop Socrates Villegas, the president of bishops' conference, who finishes his term in December, reacted swiftly to the recent killing: "We cannot be reconciled with this situation. Silence in the face of this horrendous deed is complicity," he said in a Facebook post that was picked up by the media. "Let the public outcry reach all concerned, for there must be an outcry. To us all is addressed that voice from heaven: 'The blood of the brother you have slain calls out from the earth.' "

Duterte had vowed to end the drug menace in the country and exterminate those involved in it — whatever it took. Now, drug suspects can end up as victims of the extrajudicial killings, the perpetrators of which are unknown and operate with impunity. Innocent persons, children among them, have ended up as "collateral damage."

Duterte has been hitting back harshly at human rights groups, both national and international, and the churches as well, that have criticized his drug war.

Violence is everywhere: This is how Catholic sisters respond