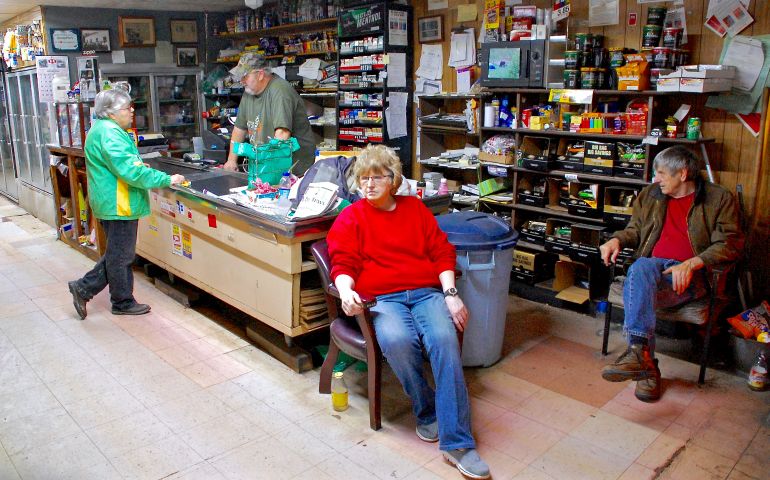 Notre Dame de Namur Sr. Kathleen O'Hagan, left, visits Harry's Market in Kermit, West Virginia, to pay down a family's credit account to make sure they can buy food. While there, she checks in with Tony Moore, standing, and his aunt and uncle, Arlene and Howard Moore. (GSR photo/Dan Stockman)

Four out of every 10 people in the county lived below the federal poverty line, which was then $5,815 in annual income for a family of four. Per capita income was $4,713 — two-thirds the national average. Very few homes had electricity, and some did not have indoor plumbing. And thanks to consolidation, there was no school in the town of Kermit, where they were to serve.

"This place was so remote then, you couldn't get here with a car," Shaffer said. "The roads were like Jeep trails."

O'Hagan and Shaffer were two of numerous women religious across the United States who flocked to Appalachia after the publication of the Appalachian Catholic Bishops' 1975 pastoral letter, "This Land Is Home to Me: A Pastoral Letter on Powerlessness in Appalachia."

What the sisters found was an array of dichotomies: Unbelievable natural beauty next to gut-wrenching poverty. Enough natural resources to fuel the nation's industry for more than a century, and people unable to benefit from them much. A people who dearly love the rugged mountains they call home but are forced to destroy when the coal industry is booming — or leave to find work in the cities when it goes bust.

The sisters who came here embraced the land and its people, and many stayed despite the hardships. Though four decades have passed since the pastoral letter, the underlying problem has not changed: The people remain relatively powerless. Standards of living are higher, regulations have made coal mining cleaner, and unions have turned coal mining into safer, well-paying jobs, but the people still have little voice, leaving their fates to the whims of politics and the economy.

The conditions that keep the people they serve powerless and poor have been frustrating, O'Hagan said, but the sisters' mission is to serve them no matter what.

Pastoral letter ‘from the trenches’ emerging in Appalachia

West Virginia's resources have long been eyed for development

West Virginia's resources have long been eyed for development