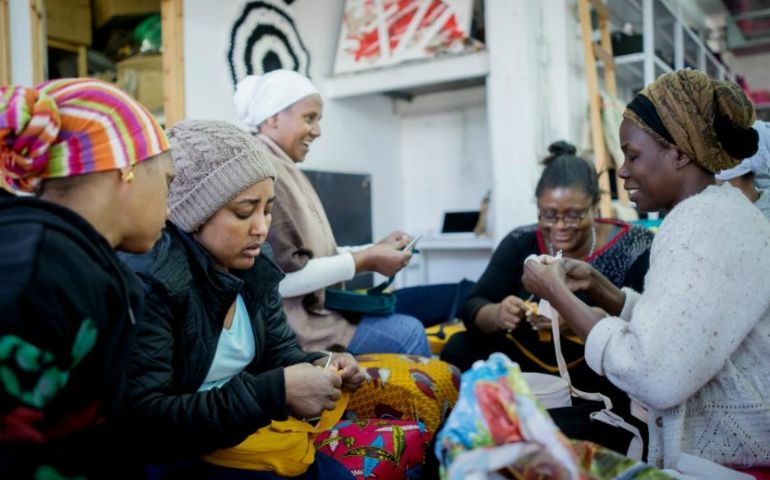 Eden, second from left, is one of the asylum seeker leaders who teach new members how to crochet baskets at the Kuchinate workshop and store in south Tel Aviv, Israel. (Flash90 Photo Agency / Miriam Alster)

Tel Aviv, Israel — Sr. Azezet Kidane, a Comboni Missionary sister originally from Eritrea, thought the worst part of the trauma for the Eritrean asylum seekers she counsels in Israel was already behind her. Through Kidane's work with Physicians for Human Rights, she uncovered thousands of incidents of torture among asylum seekers who were kidnapped along their route from Africa.

But the Eritreans in Tel Aviv, already struggling with poverty, isolation and discrimination, and some who were slowly healing from torture, now face yet another hurdle: Prime Minister Benjamin Netanyahu's aggressive and controversial plan to deport African asylum seekers. Deportation is set to begin within weeks.

Netanyahu, buoyed by a conservative-led government, charges that the migrants came to Israel for economic reasons and they threaten Israel as a Jewish and democratic state.

On Monday, Netanyahu made the dramatic announcement that the state will work with the United Nations High Commissioner for Refugees to resettle half of the asylum seekers in third countries such as Canada and Sweden in exchange for permanent status for the remaining asylum seekers. But only hours later, he froze the deal and then outright canceled it after pushback from right-wing activists, throwing the asylum seeker community further into uncertainty.