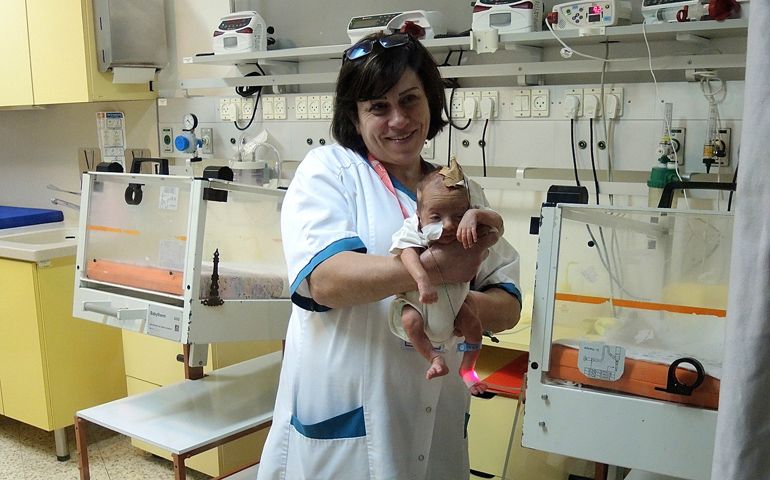 A nurse in the neonatal unit of Caritas Baby Hospital in Bethlehem holds a premature baby. Babies from across the West Bank and Gaza are transferred to the hospital, which has one of the most advanced neonatal units in the Palestinian territories. (GSR photo / Melanie Lidman)

The first sign visitors see for the Caritas Baby Hospital in Bethlehem is spray-painted onto a 30-foot-high concrete guard tower, a particularly imposing part of the separation barrier between Israel and the Palestinian territories that slices through Palestinian neighborhoods.

"Caritas Baby Hospitl: 60 Years!" the graffiti from 2012 cheerfully boasts, with a cartoonish image of twin babies. This concrete wall, which started construction in 2003, is the most visible sign of the Israeli occupation of the Palestinian territories, and of Bethlehem in particular.

This barrier was built by the Israelis in response to bloody terror attacks during the Second Intifada from 2001 to 2004. The wall has irrevocably changed Bethlehem, severing the Palestinian city from the economic engine of Jerusalem, 5 miles away, causing unemployment to soar. Many residents in Bethlehem speak of living in an "open-air prison," as they are unable to leave the West Bank except through Israeli-controlled checkpoints and must obtain permission from Israeli authorities to do so.

Sr. Lucia Corradin arrived in Bethlehem from her native Italy in 2002, at the height of the Second Intifada, to serve as director of the neonatal unit at the Caritas Baby Hospital. Today she heads the organizational development arm of the hospital as quality director and risk manager. She remembers when Israel began building the separation wall, about 50 feet from the entrance to the hospital.

"They started at the end of 2003 and it was built by March 2004," she said. "I can remember because we were going to visit these families [in the neighborhood]. They were in a really bad situation, as they were losing their land," she said. The worst part, she said, was many Bethlehem residents went to work for the Israeli contractors and ended up building the wall themselves. "They needed the money," she said.