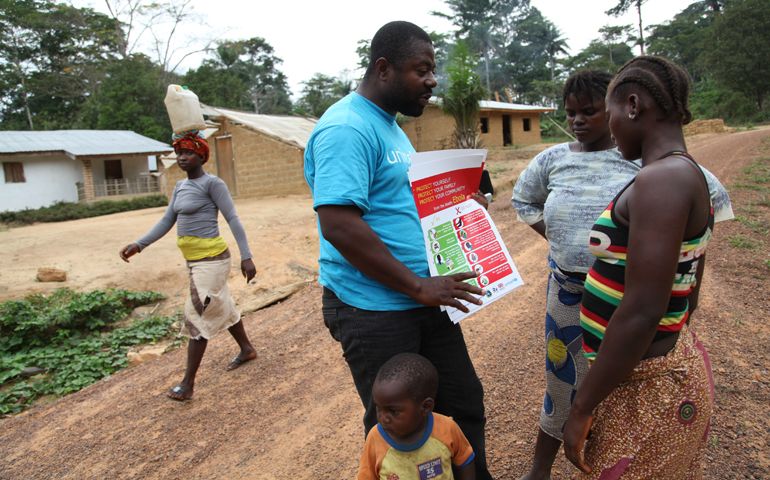 A man in Lofa, Liberia, educates villagers in late April on the prevention of Ebola disease. (CNS/EPA/Ahmed Jallanzo)

Two months after the Ebola outbreak spiraled out of control in West Africa, small signs of change are beginning to appear in the Liberian capital of Monrovia. Buckets of diluted chlorine for hand washing are outside many buildings; Ebola-specific treatment centers are opening; and now people bow to greet each other from a distance instead of embracing or shaking hands. Slowly, proper information and education is trickling out to even the most remote areas, contributing to a growing understanding of the deadly virus.

In the early days of the outbreak, people were scared to go to hospitals and clinics.

"They didn't trust the health system," said Sr. Barbara Brilliant of the Franciscan Missionaries of Mary. "Because why? Health workers were dying, and they thought these are the people who are giving it to us, not trying to save us."

As fear and confusion gripped the country over how to deal with the killer virus, Liberia's already-shaky health system collapsed. In small local clinics, sometimes entire staffs of eight or 10 people were killed within days. The Catholic church's biggest hospital in the capital of Monrovia, which employs more than 185 people, was forced to close after nine of their top doctors and administrators died of the virus.