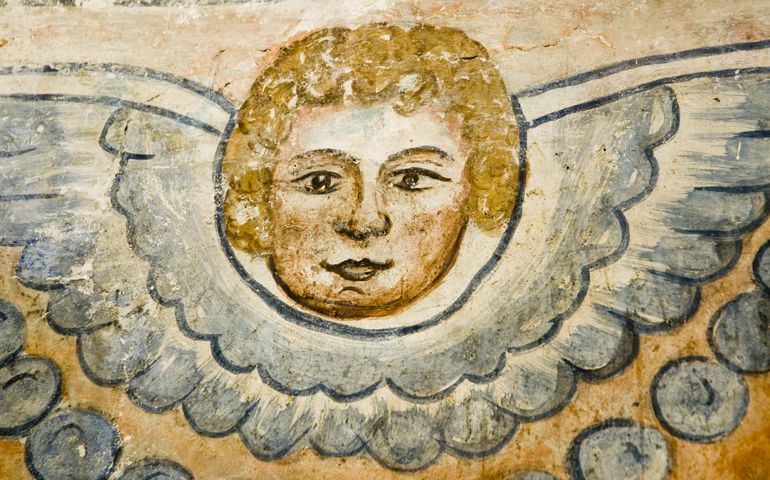 A fresco in the Cathedral of the Assumption of Mary in Cuernavaca, Mexico (Newscom/DanitaDelimont.com/Peter Langer)

The notion of commingling the ashes of the dead and mixing them together in a communal urn runs counter to America's burial tradition and its spirit of rugged individualism. But it is spiritually the right way to care for human remains, argues Raymond Plankey.

Plankey, a native Vermonter who has been on loan to the church of Latin America as a lay missionary for 53 years, knows about death. He and his Chilean wife, Gabriela Videla, have buried two sons.

Related sidebar: Culture and the care of the dead​

Nearly 50 years ago, their son Raymond was born on Good Friday and died that Easter Sunday. Their second son, David, died in a fiery accident, his Volkswagen colliding with a 30-ton trailer truck in Mexico on Pentecost Sunday some 30 years ago. David's body emerged from the wreckage so burned and broken that his grieving parents felt they had no choice but to cremate him.

Within days of David's death, Plankey reflected that had they cremated their firstborn -- rather than burying the infant in Chile -- they could have mixed the ashes of the brothers in the same box. It didn't take long for him to wonder -- and wish -- for a common family depositary where all Plankey-Videla ashes eventually could be mixed together. The couple also has two adult daughters.

"Soon it struck me," Plankey told NCR by telephone from his home in Cuernavaca, Mexico, "each parish should have a community urn where the remains of the dead are mixed together to prophetically manifest our faith and hope that they are now in the fullness of community with God in heaven."

In California, residents may be able to compost their bodies after death